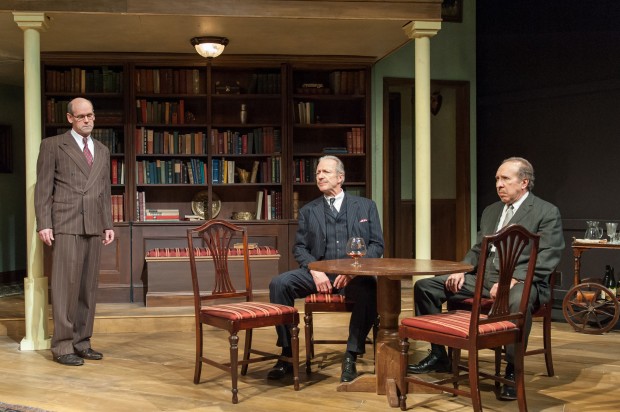 CAMBRIDGE — The race to build an atomic bomb against the backdrop of World War II wasn’t just a matter of life and death, but the survival of countries and peoples.
From June 1945 to January 1946, ten German scientists were interned together in a British country home named Farm Hall after the end of World War II in Europe. They were confined against their will, cut off from family and friends.
After being captured, they have already undergone intense questioning in France about their roles in Germany’s uranium enrichment program — aka Hitler‘s “Uranium Club.” What did they know and when did they know it? What was the extent of their cooperation with and work for the Nazi regime? How close did they come to actually building a bomb?
And, most importantly, if released, could they be trusted to turn their talents back to peacetime pursuits to benefit mankind and not to re-arm Germany?
And, when it came to working on the “uranium machine,” who, if any, had “plausible deniability” when it came to knowing the horrors of what Hitler had unleashed?
The code name for the effort to round up the scientists was Operation Epsilon, the title of Nora Theatre’s world premiere production of Alan Brody’s play of the same name at the Central Square Theatre.
Brody, a professor of theater at MIT and co-director of the Catalyst Collaborative@MIT project, wrote “Operation Epsilon” as part of this first partnership between the Nora Theatre and the collaborative, and the result is an entertaining, engrossing and enlightening production on what could have happened as a result of the scientists’ work — a monster like Hitler having a nuclear option.
“Operation Epsilon” is an ambitious undertaking, featuring as it does a full roster of fine actors under the capable direction of Andy Sandberg, who flawlessly gets the blocking right on a very crowded stage. I can’t recall an instance of an actor delivering a line while being even partially obscured. .
Brody manages to flesh out the character of each of the scientists, using their actual words taken from transcripts of recorded conversations, as well as their scientific backgrounds,
and skillfully fills the gaps to imagine what might have happened inside the walls of the spacious, comfortable home.
The scientists chafe at their confinement under the watchful eye of no-nonsense English Major T.H. Rittner (Barlow Adamson), and are made comfortable if not well-informed.
The cast is led by three veteran actors — Will Lyman, Ken Baltin and Diego Arciniegas — with the rest of the cast following closely behind.
Lyman is Otto Hahn, who unlocked the secrets of nuclear fission and who eventually received the Nobel Prize, but who is horrified upon learning of the Americans’ explosion of an H-bomb over Hiroshima, and what might happen with the secrets he has helped unlock.
Ken Baltin is Max von Laue, who vigorously opposed the Nazis and was not involved in nuclear fission; the reason for his inclusion in the group is kept secret until the end.
Diego Arciniegas is the piano-playing Werner Heisenberg, whose concern for the reputation and that of his colleagues uber alles is a disquieting element that sparks discord among the group.
He worries about how history will judge him and the others, rather than the human devastation they left behind, and hopes that a memorandum that he and the others write will be published and help absolve them of blame. Right there with them is Robert D. Murphy as Nobel Prize winner Walther Gerlach, former head of nuclear research, who also is concerned about his reputation and what will happen when they return to Germany..
Brody also speculates whether Heisenberg deliberately miscalculated in an effort to keep the bomb away from Hitler, and his subsequent obsession in finding out what went wrong
In his calculations.
There are strong contributions from the rest of the cast, which has no weak links: Owen Doyle, John Kooi, Kendall Hodder, Ross MacDonald, Allan Mayo, and Dan Whelton.
A harrowing letter that Hahn receives from a former colleague — a Jewish scientist that he helped to escape the country — helps him realize that there will be no absolution — and no escaping the guilt, for the matter — for their association with the murderous Nazi regime.
Kudos to Janie E. Howland for her remarkable two-floor country home she has assembled in the versatile but limited theater space, encompassing several different rooms, including an office for Major Rittner, allowing the action to move briskly around the home.
The dramaturgy at the Central Square Theatre is almost always excellent, so check out the display in the lobby and then the poster explaining what became of the “alumni” of Farm Hall when they were finally released from captivity and went back to Germany and their careers.
“Operation Epsilon” is yet another feather in the cap for the Central Square Theater and the Nora Theatre, which both have seen amazing growth in recent years. If you have a chance to get to “Operation Epsilon” before it closes on April 28, do so.
The Nora Theatre world premiere production of Alan Brody’s “Operation Epsilon.” Directed by Andy Sandberg. At the Central Square Theatre through April 28. www.centralsquaretheater.org.