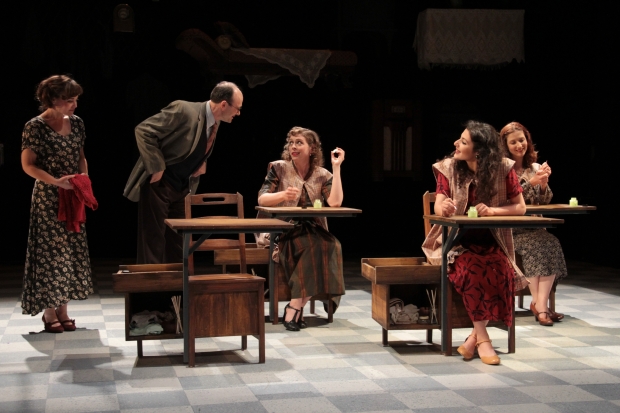 The cast of the Stoneham Theatre’s production of “These Shinging LIves.” Photo: Carla Donaghey.

STONEHAM — The Occupational Safety and Health Administration didn’t come into existence until 1970. Worker’s compensation laws varied from state to state.
Back in the 1920 and 1930s, female factory workers, later known as “Radium Girls,” contracted radium poisoning from painting watch dials with glow-in-the dark paint laced with radium.
Melanie Marnich‘s “These Shining Lives” is based on the true-life story of the hundreds of women who painted watch dials for companies across the country, in this case the fictional Radium Dial Company outside of Chicago.
One of the first rules of journalism when writing about an issue is “put a face on it.”
In “These Shining Lives,” which begins in 1922, the face is that of a woman named Catherine Donahue (McCaela Donovan), who hears about the money being earned by the women — $8 a day and more — and appeals to her blue-collar husband Tom (Joe Short) to give her a chance to help the family.
Donovan has skillfully portrayed some outsized personalities and characters in the past but here she and director Caitlan Lowans take it back a notch as Donahue, our narrator and a woman who loves her family and being at home with her kids, but decides to take on a job to give the financially-stretched family some breathing room.
Joe Short is fine as the husband who knows the family needs the money but eventually becomes befuddled and concerned at his wife’s growing life outside the home and family. During The Depression, 28 states in the country legally prevented women from working.
Catherine bonds instantly with her co-workers: the brash, cynical, outspoken Charlotte (Kathryn Miles); Melis Aker as the more light-hearted Pearl; and Dakota Shepard as Frances, the “moral compass” of the group.
Their boss, Mr. Reed (Allan Mayo, excellent in several roles) explains the ground rules: the more watch dials you paint, the more you make
The girls explain that to get the dials done quicker — and thus make more money — it’s easier to lick the tip of the brush to form a point before dipping it in the radium dust.
It seems laughable now, given what we know, but companies such as Radium Dial Company boasted of using “pure radium only” on its watch dials, and pure radium indeed was what the women ingested, eventually leading to their deaths.
There are some nice moments of the women together over a banana split or on the shores of Lake Michigan but the only one of the quartet we really feel we know is Katherine, because we have a chance to see her interactions with Tom.
The work — and the radium — take their toll, and eventually their various ailments and concerns become too obvious to be ignored. Still, as the Depression deepened, they struggled to hold their jobs.
Finally, the heartbreaking moments come when the women are let go by the company, and the women decide as a group that they will take on the company in court . They struggled to find a doctor — Dr. Walter Dalitsch — to diagnose their problems and what caused them and had to look even harder for the attorney, Leonard Grossman, who would even take their case.
The case dragged on for six years all the way to the U.S. Supreme Court, finally establishing the right of workers to sue their employers for negligence.
The scenes after the women are diagnosed are the most compelling of the play; Donovan shines as the dying Donahue who has been lied to but refuses to roll over and goes out fighting to the end.
Christina Todesco’s eclectic floating set drew a mixed reaction — interesting but seemingly off-kilter from the tone the play was trying to set, while David Remedios’ sound, with its ticking watches and heartbeats, also cheerfully invokes the Roaring 20’s.
“These Shining Lives” shines a spotlight on a dark time for labor in this country.
But out of that courage of Donahue and her co-workers came a series of precedents of labor laws and protections.
In September 2011, a memorial to the “Radium Girls” was unveiled in Ottawa, Ill.
In “These Shining Lives,“ playwright Marnich skillfully reminds us that the rights, privileges and protections we enjoy today too often are built on the backs of the Catherine Donahues of this world..
The Stoneham Theatre’s production of Melanie Marnich’s “These Shining Lives.” Directed by Caitlan Lowans. At the Stoneham Theatre through June 22. http://www.stonehamtheatre.org.