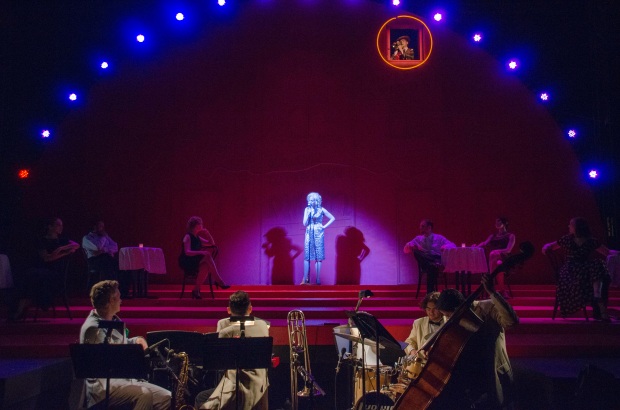 BOSTON — In just a few hours, the agony and the ecstasy of outdoor theater were fully explored.
The Commonwealth Shakespeare Company took the worst that Mother Nature could dish out and emerged with a well-deserved artistic triumph Wednesday night with its production of Shakespeare’s comedy “Two Gentlemen of Verona” on the Boston Common.
CSC founding artistic director Steven Maler has transformed Milan into the Las Vegas of the 1960’s, with the Rat Pack, led by Frank Sinatra, dominating the landscape, a la the Rat Pack movie “Ocean’s Eleven,” also set in Vegas.
That opened the door for some gorgeous music both recorded and live, and a live jazz band to give the live music that much more oomph.
The music works beautifully, setting the tone from the first bouncy notes of Andrew Burnap as Valentine and Peter Cambor as Proteus performing “A Lot of Livin’ to Do” to the reprise of the number by Sammy Davis Jr. in the finale. Burnap also plays a mean trumpet.
In between, there are 13 other live and recorded numbers, including a show-stopping Jenna Augden as Julia with a sultry performance of “Fever.”
Maler even gives new life to the Dean Martin standard “Volare” by music director Colin Thurmond re-casting it as Shakespeare’s song from the play, “Who is Sylvia?”
Oh yes, Mother Nature threw out some warning raindrops just before the curtain rose that got more insistent at the act of Act One, forcing two delays to the start of the second act. 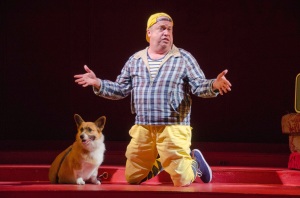 As SmartPhones in the audience optimistically tracked the front moving clear of the city, two delays were announced on stage until Act II finally commenced about an hour after the end of Act I.
Onstage, it was all good. “Two Gentlemen” was Shakespeare’s take on the “buddy movies” that would emerge centuries later, with the teams of the aforementioned Martin and Jerry Lewis, Bing Crosby and Bob Hope or Paul Newman and Robert Redford.
Here it is Proteus and Valentine, two best friends who part ways at the beginning, Valentine to chase the bright lights of the court in Milan while Proteus stays in Verona, dedicated to his beloved Julia.
Almost immediately after his arrival in Milan, Valentine is smitten with the beautiful Sylvia (Ellen Adair), the daughter of the Duke of Milan. The problem is that the Duke (Rick Park channeling his inner Paul Sorvino as a cigar-chomping, golfing, Mafioso-type) hopes to marry Sylvia off to the feckless Thurio (Evan Sanderson).
Sylvia will have nothing to do with Thurio and quickly warms to Valentine, who schemes to get past the Duke’s defenses and take up with her.
At the same time, the restless Proteus has arrived on the scene and ingratiated himself with the Duke while also being smitten with Sylvia. He betrays his friend Valentine, and schemes against Thurio.
Julia decides she should also make the scene in Milan (in disguise) to see what Proteus is up to, leading to assorted merry hijinks in the second act.
There’s some grand comic action and serious mugging — if that sounds like an oxymoron, it’s still true — by Remo Airaldi as Speed, Proteus’s servant, and the inimitable Larry Coen as Launce, Valentine’s servant.
Coen shines with his comic foil, Crabbe the dog, played by Maestro, and Airaldi and Coen even combine for a musical number, “Ain’t That a Kick in the Head.” By the way, don’t miss the hilarious bios of the four different canine actors in the Playbill. A great touch.
“Verona” features dazzling production values, from J Hagenbuckle’s superb sound design — it doesn’t matter if it’s live or recorded music, it all sounds great — and Beowolf Boritt’s set suggesting the glitz of Vegas (but utilitarian enough to be quickly squeegeed when the rains fell) to the effective lighting of Eric Southern.
There is also a host of Vegas-themed production numbers where the CSC’s talented ensemble joins in the fun.
Mother Nature may have done her best to slow down the company Wednesday night, but the end result was a joyous, funny, endlessly creative evening of theater, not to be missed.
The Commonwealth Shakespeare Company’s production of William Shakespeare’s “Two Gentleman of Verona.” Directed by Steven Maler. Free; suggested donation $10. At the Parkman Bandstand on the Boston Common through July 28. commshakes.org.