‘Much Ado’ is an enchanting afternoon in the woods 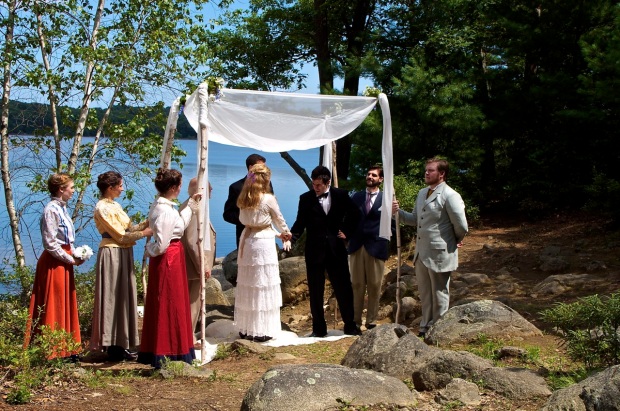 The Lynn Reservoir in the Lynn Woods  provides the backdrop for the wedding scene of Hero and Claudio in Arts After Hours’ “Much Ado About Nothing.” Photo: Arts After Hours.

LYNN — The Lynn-based arts group Arts After Hours is going into The Woods again.
Not to do Sondheim, but, for the second straight summer, Shakespeare. “Much Ado About Northing” is one of The Bard’s most light-hearted, accessible works, and it worked beautifully in the vibrant performance given by the troupe in the Lynn Woods Reservation recently.
“Much Ado” is being performed on Saturday and Sunday afternoons through Aug. 11 at the entrance to the Lynn Woods at 180 Pennybrook Road in West Lynn.
The troupe makes deft use of both the natural topography and other features such as the readymade picnic area that serves as a backdrop for the scenes that involves celebrations, including a masked ball and the marraiges that are an integral part of the story. Patrons move with the performers to areas in the Jackson Path area of Lynn Woods, including scenes overlooking the Lynn Reservoir.
“Much Ado About Nothing” is the story of two sets of lovers and the conspiracies and events that brings one couple together and the other conspiracies and other events that threaten to kill the love of another couple.
Returning from war and ready to relax with his soldiers after a successful campaign, Don Pedro (Conor Seamus Moroney), a hale fellow well-met, radiates charm and bonhomie as he prepares for much-needed R&R and the hospitality of Leonato (Arthur Waldstein).
Leonato’s palatial estate has been transferred by the troupe from Shakespeare’s Messina to the Lynn of the 1890’s, and the type of home a prosperous shoe magnate might own.
Leonato lives with his fair daughter Hero (Anna Waldron), his niece Beatrice (Lorne Batman) and his brother Antonio (James Tallach), Beatrice’s father.
Don Pedro is accompanied by a gallant young nobleman, Claudio (Sam Tilles), his close friend Benedick (Woody Gaul) and his illegitimate brother, Don John (Kimberly Feener), an unsettling influence on the group.
Woody Gaul’s Benedick sets the tone for the company .His Benedick is expansive and engaging, witty to a point. And Lorne Batman as the equally clever Beatrice is every bit his equal; the two share a past that has seen them verbally parry, and they are back at it again, the one-liners batted back and forth as their friends conspire to bring them together forever.
But there is a different sort of conspiracy also afoot, involving Don John and his compatriot Borachio (Bryan Max Bernfeld) and they will set in motion events meant to disturb the blissful romance of Hero and Claudio.
Kudos to director Hondo Weiss-Richmond , who has obviously conveyed to his troupe the importance of exaggeration when it comes to performing outside, without the confines of a theater or, in this case, a proscenium stage, and with the possibility of distractions from a passer-by or a barking dog.
An arched eyebrow has to be arched that much more; a grand gesture be that much more grand. If in doubt, let it out a notch; the folks in the back will appreciate it. It was a struggle to hear a couple of the female players at times in last Saturday’s performance.
There are some very smart comic sequences with Meredith Stypinski as Dogberry, and James Tallach as Verges, the local constabulary on the job uncovering the conspiracy against Claudio and Hero.
The live music, composed by Ginas Naggar and performed by John Guarino and Mathew Kim, adds greatly to the piece, and, as AAH Managing Director Corey Jackson explained before the show, “just follow the music” if you are unsure in which direction you should be heading.
“Much Ado” moves at a easy to follow pace, but still brisk enough that it keeps the action flowing. It is performed without an intermission, so the theatrical thread of the piece is never broken.
Theater-goers can also purchase a picnic lunch that can be consumed before the performance.
Take a walk in the woods, be entertained and enchanted by both the performers and the natural beauty.
Arts After Hours production of William Shakespeare’s “Much Ado About Nothing.” Saturdays and Sundays through Aug. 11 at 180 Pennybrook Road, Lynn, at the entrance to the Lynn Woods Reservation. Tickets are $25, $35 including picnic lunch. http://www.artsafterhours.com.