New Rep’s ‘Rancho Mirage’: There’s no there there 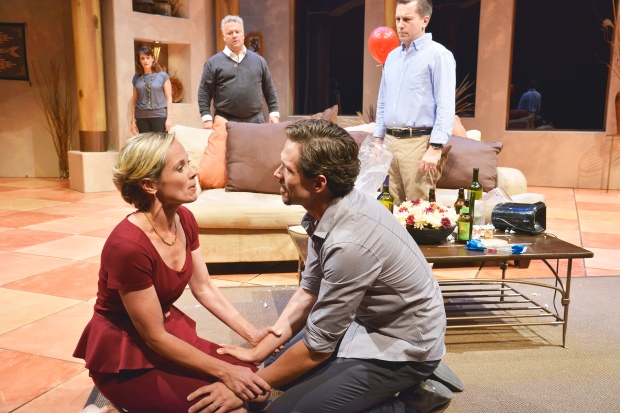 WATERTOWN — In a way, the kind of gated community often found in the leafy suburbs has become a symbol of the tarnished American Dream.
It is where the tragic death of Trayvon Martin occurred, and where many go to wall themselves off from those who lack the resources to make it inside those gates.
What kind of people live there, and what are they really like when you get to know them?
Playwright Stephen Dietz strips away the façade of some of the inhabitants of a gated community in his “Rancho Mirage,” now enjoying a rolling world premiere at the New Repertory Theatre as part of the National New Play Network. “Rancho Mirage” is enjoying four productions around the country, including the New Rep.
The bad news: “Rancho Mirage” isn’t a great piece of theater, but, in the hands of director Robert Walsh and a finely-tuned cast, it is often entertaining.
It begins in the gorgeous, finely-appointed Western-style living room set designer John Howell Hood has laid out on the stage of the Charles Mosesian Theatre.
A dinner party is on tap in the home of Diane (Tamara Hickey) and her designer husband Nick (Lewis Wheeler) in Rancho Mirage, the gated community in question. Their neighbors Trevor (Robert Pemberton) and Louise (Abigail Killeen) are coming by, as well as Charlie (John Kooi) and Pam (Cate Damon), who don’t live in the development but are longtime friends who find themselves there quite often.
Early on, we find out that Diane and Nick are broke, like many caught up in the Great Recession/Depression. Not just broke, but flat broke, so broke they can’t pay their babysitter, and their sumptuous home has been foreclosed upon and its inhabitants are about to be tossed out.
Diane wants Nick to forego his pride and ask their friends for help.
After a few bottles of wine, it turns out it’s just one long alcohol-fueled game of “I’ve Got a Secret,” and when the ladies and gentlemen go to their separate corners after the dinner, the women start spilling the beans on what’s really happening in their lives.
Robert Pemberton, so fine recently as a flummoxed Southern businessman and dutiful son in Gloucester, “Driving Miss Daisy” is Trevor, a fine, easy-going fellow well-meant who for much of their marriage has been suffering at the hands of a wandering woman, his college professor wife Louise, who has tried to be a good for the last few years, hut alas, the marriage is disintegrating and a custody battle for the kids is looming.
While Nick and Diane and Trevor and Louise have children and they actually share a babysitter, Charlie and Pam are childless but Charlie is planning to do something dramatic about it — but he hasn’t quite gotten around to informing Pam.
Suffice it to say he’s thinking Angelina Jolie-style adoptions, and religion — he ‘s the religious one — will also eventually become an issue.
The dialogue is often pointed and sharp and Dietz will dole out the plot wrinkles and surprises one by one: Trevor, for example, is struck with the desire to mend clothing and show off sewing skills. I get the metaphor
At the end, after all the surprises and revelations, the couples will be even closer than they already were. But I have to confess that at no point, despite the skills of the actors and the director, did I really start caring about these characters and their problems.
I felt like telling the characters to stop whining and sniveling and do something about their problems.
If you’re so broke you can’t pay your babysitter, why are you taking trips abroad? Shouldn’t the husband, the wife or both be spending most of their time looking for a job?
The biggest problem with “Rancho Mirage” is that inside those security gates, there’s no “there” there.
The New Repertory Theatre production of Steven Dietz’s “Rancho Mirage.” Directed by Robert Walsh. Scenic Designer, John Howell Hood; Costume Designer, Amanda Maciel Antunes; Lighting Designer, Deb Sullivan; Sound Designer & Composer, Dewey Dellay; Production Stage Manager, Leslie Sears At the Charles Mosesian Theatre at the Arsenal Center for the Arts through Nov. 3. http://www.newrep.org.

← ‘Hairy Beasts’: Blood and gore can be great fun
Anchor struggles to connect in ‘The Power of Duff’ →