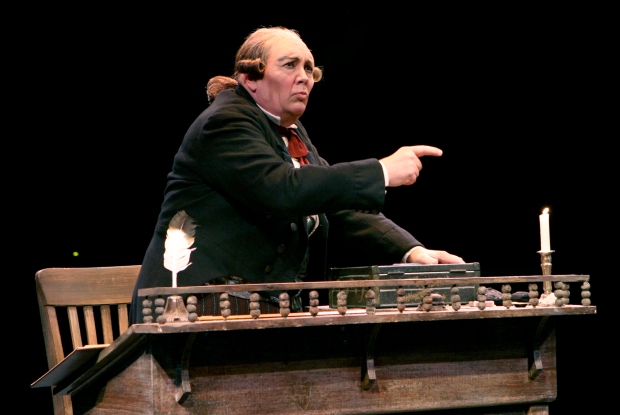 BEVERLY –– When Bill Hanney bought the North Shore Music Theatre out of bankruptcy in 2010, among the things he purchased were the building, other physical assets, the theater’s name and reputation.

It would seem that one of the other things he inherited was NSMT’s annual production of the Dickens’ classic “A Christmas Carol,” which has been around since 1989 and has attracted more than one million people.
Now through Dec. 22, Hanney is presenting the adaptation penned by former NSMT Artistic Director Jon Kimbell (assisted by David James and David Zoffoli) for the fourth time, and if the show has lost any of its luster since it was first presented in 1989, I haven’t see it.
This year’s “Carol” marks the 20th time that Texan David Coffee has performed the role of the miserly, wretched Ebenezer Scrooge and his magical transformation, and the 20th time I‘ve seen him perform the role. Coffee is still the gold standard for Scrooges, and at the age of 56 he shows no signs of slowing down.
You’re missing half the show if you just watch Coffee as he acts. How he reacts to what is going on around him is really the key to the performance.
He truly believes in both the piece and the message, and perhaps that is what has made him such a great Scrooge.
His redemption at the end of the show is a lesson in giddiness, unrestrained joy that never fails to amuse you, make you laugh and then cry.
Kimbell has set his adaptation in London of the 1860s, about 20 years after Dickens wrote the piece, when a Narrator (Ryan Bates) looks back on the events of 1843.
While Kimbell tinkered with the show for its first few years, there are certain elements of the show that have remained constant for quite a while.

This adaptation has always been subtitled “A musical ghost story,” and there is plenty of both music and ghosts. There ’s the lovely use of period and original music, arranged and composed by Albie Potts and James Woodland and led by conductor Mark Hartman, with strolling musicians strategically placed around the theater for maximum effect.
The ghosts are truly spectacular, none moreso than Matt Allen’s scary flying, howling Jacob Marley. The Pearlies are dancing spirits, in this case Nathaniel Braga and Joshua Keith.
It’s always a pleasure to hear the lovely singing voice of Leigh Barrett as the Ghost of Christmas Past while also portraying Mrs. Cratchit,.
There’s fine support from Russell Garrett as a heartfelt Bob Cractchit, Sheldon Henry as an ebullient Ghost of Christmas Present, Kevin Patrick Martin as Young Scrooge, Gillian Mariner Gordon as Belle, and J.T. Turner as Fezziwig. Bronson Patrick Murphy is a requisite hale fellow well met as Scrooge’s nephew Fred and the kids are a treat, including Sarah Gillespie as Tiny Tim, the second straight female to perform the role.
It doesn’t get any better than Cheryl McMahon as Mrs. Dilbur and her priceless interaction with Coffee as Scrooge, and she shows off her singing and dancing chops with one of the best productions numbers “Isn’t It Grand Boys?”
The aforementioned Hanney recognized both Coffee and McMahon Friday night for their 20 years in the production.
This “Carol” marked a bittersweet moment for Hanney and the NSMT staff because it was directed by Arianna Knapp, who is leaving her post as artistic director of the theater.
Knapp is going out with a shining star to her credit.
If you haven’t see this show — and even if you have — what are you waiting for? It only runs through Dec. 22.
At the end of the production, Bates as The Narrator describes in detail the Scrooge he came to know.
“He was as a good a friend — as good a master — as good a man as the old town ever knew.”
That could describe both Ebenezer Scrooge — and David Coffee.
The North Shore Music Theatre production of Charles Dickens’ “A Christmas Carol.” Adapted by Jon Kimbell. Original music composed and arranged by Alby Potts and James Woodland. Directed by Arianna Knapp. Music direction by Mark Hartman. Scenic designer Howard C. Jones. Lighting design by Jack Mehler. At the North Shore Music Theatre through dec. 22. http://www.nsmt.org

← Oliva, Coen will have you rooting for ‘Becky’
WFT’s ‘Life’ is a skilled retake of a cultural icon →