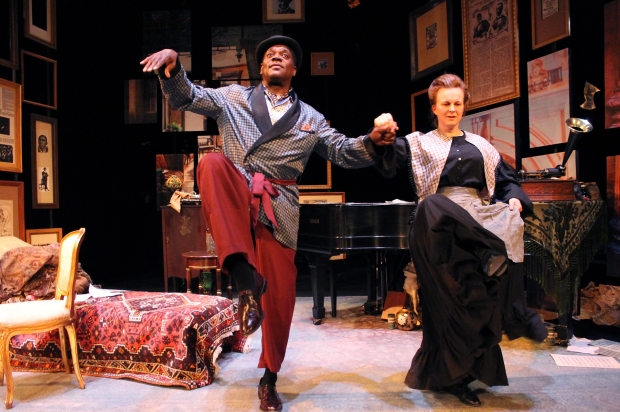 STONEHAM — Fame can be very much a two-edged sword, especially when your fame is generated by a song whose title will end up haunting you until the end of your days.
And so Ernest Hogan, the first black man to appear on Broadway in 1907‘s “The Oyster Man,” is at once both famous and infamous for his hit 1895 song “All Coons Look Alike to Me,” which sold more than a million copies.
And while Hogan, one of the most popular performers and comedians of his time, meant his piece, part of a new genre of song he called “ragtime,” as a commentary on the poor way blacks were treated at the time, it still spawned a succession of racists who imitated the piece and created other so-called “coon songs” that denigrated blacks with racial stereotypes and held the minstrel tradition up to ridicule.
He later said he “regretted” using the racial slur in the song’s title.
His regret forms the backdrop for Michael Aman’s “The Unbleached American,” now having a world premiere run at the Stoneham Theatre.
Hogan became known as one of the fathers of ragtime, an all-American musical genre that came alive in modern times with the rags played in the movie “The Sting” and the Ahrens-Flaherty musical “Ragtime.”
He committed songs to paper at a time when many musicians who played by ear didn’t commit their songs to paper, and much of the genre would have been lost without him.
In the play, Hogan is near the end of his life — a life that ended much too soon at the age of 44 due to tuberculosis — and is being cared for by a poor Irish immigrant nurse named Sharon Flynn.
And while the acting by the estimable Johnny Lee Davenport, making his Stoneham debut as Hogan, and Laura Latreille as Sharon Flynn, the nurse who turns out to be a soul mate of sorts, is first-rate, I can’t help feeling that I ended up leaving the piece not knowing as much as Hogan and his life as I’d liked.
Whether that’s the playwright’s fault or the lack of biographical material about Hogan — even prominent blacks at the time were hardly the subject of newspaper features — I’m not sure, but if there were a way to pack more about the tenor of the times while also holding onto the unlikely relationship, it would make for a stronger piece.
Hogan holds his new nurse at arm’s length at first, but is fond of her Irish heritage — he took the name Hogan as a stage name because Irish performers were popular at the time he set out to become a performer — and because she packs a full flask when she comes to visit, he finds in her a kindred spirit.
Her father was a minstrel performer and herself harbored aspirations of a performing career, making the ties grow even stronger.
And while is a titanic battle of wills as he — and her — struggle with their inner demons, she vows to “keep him alive” and she do what she can to restore his fading health.
But by confining the piece to this one room in Hogan’s New York apartment and largely to his relationship with Flynn, it comes at the expense of knowing more about Hogan’s life, how he became what he became, how his star rose and then crashed.
There are strong production values, from Katy Monthei’s intriguing townhouse festooned with the myriad portraits, newspapers stories, and sheet music of Hogab‘s life, to the Gramophone recordings and strong sound design by David Remedios, a recent IRNE Award-winner, and the lighting by John Eckert.
Director Weylin Symes, the artistic director of Stoneham Theatre, worked closely with author Aman on this production, and presumably other productions of the piece will follow.
If I were tweaking the piece, I’d just like a way of getting into the man himself more, perhaps more of what those around him were saying and feeling at the time about him. I just wish I got to know him better than I did by the end of “The Unbleached American.”
The Stoneham Theatre production of Michael Aman’s “The Unbleached American.” Directed by Weylin Symes. Scenic design by Katy Monthei. Costume design by Elisabetta Polito. Lioghting design by John Eckert. Sound design by David Remedios. At the Stoneham Theatre through April 27. Stonehamtheatre.org.