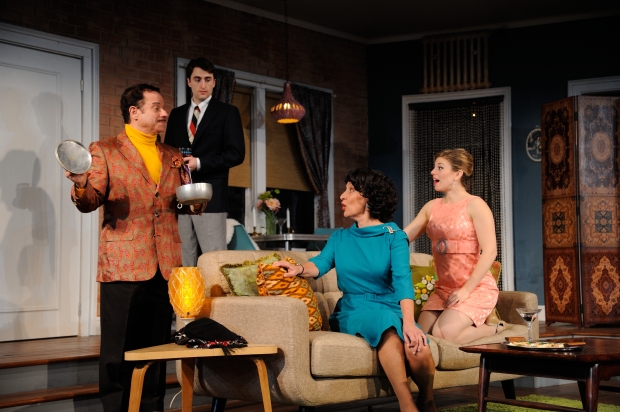 PROVIDENCE, R.I. — It seems the plays of the prolific Neil Simon have fallen out of the rotation of many theater companies in recent years.

So much so, I have a hard time remembering the last one I’ve seen.
The Tony Award-winning author of the acclaimed “Brighton Beach Trilogy,” which includes the Pulitzer-winning “Lost in Yonkers,” and classics such as “The Odd Couple” and “Promises, Promises” almost seems consigned to the theatrical remainder bin.
So kudos to the Trinity Repertory Company for deciding to stage “Barefoot in the Park,” which debuted on Broadway in 1963 starring Robert Redford and Elizabeth Ashley and ran for 1,530 performances, making it Simon’s biggest hit and really launching his career as a playwright.
Simon was a radio and TV sketch comedy writer before he was a playwright, and you can see the sketch and sitcom training in the construction of his work. When he was making the transition to Broadway, he took with him his ken for sharp dialogue and the quick laugh, and added an ability to flesh out characters and situations into full-length productions.
When you’re doing a romantic comedy, it really matters that the two leads have some chemistry, and here the Trinity Rep has taken no chances. They’ve enlisted a real-life couple — Charlie Thurston and Rebecca Gibel — to play the newlyweds Paul and Corie Bratter and yes, it does make a difference. The sometimes-awkward kissing scenes go very smoothly, thank you.
After a six-day honeymoon at the Plaza Hotel — Simon will return there later in his canon with “Plaza Suite” — the couple begins life up five flights of stairs to a sixth-floor walkup.
Paul is a buttoned-down young lawyer just starting out, and Corie — more impetuous and impulsive, bubbling-over-with-enthusiasm, attacking everything she does — wants to make him a warm, comfortable home.
But their new mini-apartment comes with a few noticeable quirks — a bedroom that’s actually the size of a closet, no bathtub, questionable heat, and a broken skylight that opens up to the outside — even in the middle of winter.
Simon drags in a phone repairman (Uche Elueze) not once but twice to serve as an able comic foil, and the second time he finds himself caught in the middle of a deep freeze between Paul and Corie.
Stephen Berenson is excellent as Victor Velasco, right out of the Neil Simon Catalogue of Crazy Neighbors, the foremost example being the Pigeon Sisters from “The Odd Couple.” Berenson is up to the task as the penniless but still pompous Velasco, a would-be Lothario who manages to be oily and charming at the same time.
Phyllis Kay is Corie’s mother, Mrs. Banks, a good sport whose eyes bug out when after scaling the heights to visit the new abode, but she manage — barely — to survey it without throwing up.
She suffers again as Corie becomes matchmaker for a double-date, being dragged out to Staten Island to visit one of Victor’s notorious haunts.
Into each life some rain must fall, and fall it does in terms of a vigorous argument that threatens to derail the marriage almost before it begins.
Opposites attract, but they also fight, and it’s a Texas Death Match between the attitude of Corie — who favors running barefoot in the park — to the more conservative approach of Paul.
“We’ll be sleeping left to right tonight,” Paul announces at one point in a barb at the living accommodations.
“They stuffed your shirts beautifully,” she scolds later.
Simon will craft a witty fight before things are wrapped up neatly and lovingly in an exciting, fraught-with-peril ending.
Kudos to Daniel Zimmerman’s well-thought-out and well-realized set design, which takes advantage of the Dowling Theatre’s seats-on-three-sides configuration; the outside walls of the building slide back to reveal the apartment within; those walls will play an important role in the ending.
Is the 51-year-old “Barefoot in the Park” dated a bit? To be sure. But funny is funny and good, sharp writing never goes out of style, and for those too young to remember the show the first time it hit Broadway or missed the movie version that starred Redford and Jane Fonda, Simon’s skills as a playwright may be a bit of a revelation.
The Trinity Repertory Company production of Neil Simon’s “Barefoot in the Park.” Directed by Michael Perlman. Cast: Stephen Berenson as Victor Velasco, Uche Elueze as Telephone Repairman, Charlie Thurston as Paul, George Spelvin as Delivery Guy, Phyllis Kay as Mrs. Banks and Rebecca Gibel as Corie.  Directed by Michael Perlman, set design Daniel Zimmerman, costume design Toni Spadafora, lighting design Scott Bolman. At the Dowling Theatre through Dec. 21. http://www.trinityrep.com.