‘Rudolph’ on stage is true to the TV classic

Press notes describe it as “ a musical so faithful to the original show that it practically transports audience members into the television special,” and I’d say that’s a fair description.
The story tells the tale of a young Rudolph (Lexy Baeza) who, because of the appearance of his bright, shining nose, is ousted from the Reindeer Games in Christmas-town. He flees town, meets up with new friends Hermey and Yukon Cornelius, and a series of funny and endearing adventures ensue, including a visit to The Island of Misfit Toys.
Rudolph journeys home, where a snowstorm of epic proportions is threatening Christmas. Can Rudolph save his family and friends and help Santa save the holiday?
All of the beloved characters that are part of the animated classic are included in the stage production: Santa and Mrs. Claus, Hermey the Elf and a full complement of other elves, the prospector Yukon Cornelius, the Misfit Toys, and, of course, Rudolph, his female friend Clarice, Donner and Mrs. Donner, Rudolph’s perplexed parents, and the big, scary Abominable Snow Monster. 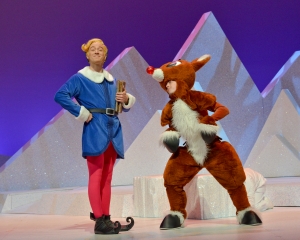 Even the narrator of the show — Sam the Snowman (Ryan Coon) — looks suspiciously like — make that exactly like the animated character, which in turn looked exactly like the late Burl Ives, who narrated the animated special and whose voice became synonymous with the song “Rudolph, the Red-Nosed Reindeer.” Sam even plays the banjo just like Burl Ives, a task incredibly hard for a snowman.
The critic needed some help for this one, because he is not in the target demographic the show is trying to reach in its one week run at the Shubert Theatre that began Tuesday night.
My niece Liz Meader, 9, of Plymouth allowed that Hermey (Wesley Edwards), who wants to abandon his elfship in favor of a career in dentistry, confounding the Boss Elf (Dino Nicandros), was the best of the bunch Tuesday night.
“He sounded just like Hermey should sound like,” she said. Liz also praised the scenery, the special effects, and the animals handled by the puppet masters, including the ultra-scary Abominable Snow Monster.
As someone who first watched the animated production — the longest-running and highest-rated holiday production of all time — when it was introduced a half-century ago, Johnny Marks’ music and lyrics stand the test of time , and the audience will get a chance in the second act to join in on sing-alongs to “A Holly Jolly Christmas” and “Rudolph.”
The production will also give parents a chance to talk with their children about tolerance and respect for others who are different. The production is tying in with the Twitter #ShineBright social media campaign, a celebration of uniqueness that will be championed by PACER’s National Bullying Prevention Center. Workshops, lesson plans and special performances will use the story as a platform for teaching important lessons about diversity and tolerance.
The entire production clocks in at about 90 minutes, including an intermission, making it an excellent option to introduce your child to live theater.
If you’re young or just young at heart, “Rudolph” should rekindle old memories or make new ones.
“Rudolph the Red-Nosed Reindeer: The Musical.” Directed by Dana Solimando. Stage Adaptation by Robert Penola, Arrangements and orchestrations by Timothy Splain At the Citi Performing Arts Center Shubert Theatre, 265 Tremont St., Boston, Tuesday, December 9 – Sunday, December 14, 2014, for 12 performances. For more information, visit http://www.citicenter.org .