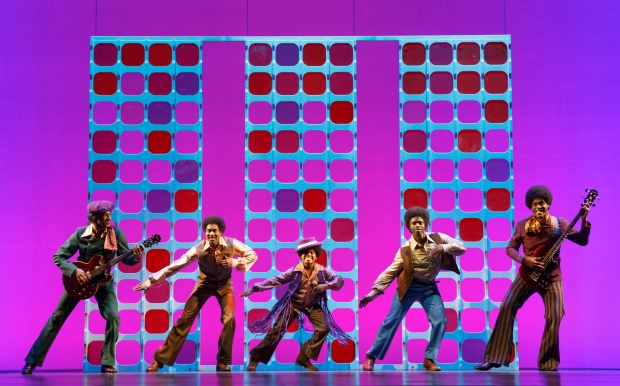 The Jackson Five are portrayed in the national touring production of “Motown: The Musical” at the Boston Opera House. Photo copyright Joan Marcus 2014

BOSTON — If you were moved by Michael, dazzled by Diana, and were smitten with Smokey, “Motown: The Musical” is your cup of tea.

The national touring production of “Motown: The Musical” at the Boston Opera House is a joyous musical celebration, with some spot-on impersonations of iconic musical acts and an uneven book that chronicles the rise, fall, and then revival of the musical juggernaut founded by Berry Gordy Jr. , who took rhythm and blues artists and crossed them over into the mainstream, making them some of the industry’s greatest pop stars.
The book is based on Gordy’s 1994 autobiography, with some tweaking by David Goldsmith and Dick Scanlan.

The  real star here is the music, with bits and pieces of 60 songs in all, including a few full-length renditions of numbers Gordy and Micael Lovesmith wrote especially for the show, the best of which — “Can I Close the Door on Love?,”–  in a recent performance was gloriously sung by Julius Thomas III as Gordy.
On Broadway, “Motown the Musical” had but four Tony nominations and earned mixed notices from critics, but it didn’t harm the Broadway box office — business was very strong. In the national touring production now in Boston, Gordy’s book tries to do a little too much, in so many storylines and dizzying parade of now-you-see-them-now-you-don’t appearances by Motown acts.
‘Motown” gets off to a strong start The Four Tops and The Temptations in perfect sync when it comes to singing and dancing
Just as the smash-hit musical “Jersey Boys” looks back from the time the Four Seasons were inducted into the Rock’ Roll Hall of Fame in 1990, “Motown: The Musical” begins its story at a 1983 reunion of Motown’s greatest acts at the Pasadena Civic Auditorium, where a television special will be aired. A troubled Gordy is trying to decided whether he will join on stage members of the Motown “family” he developed and nurtured and who subsequently left him for other labels, often leaving bad feelings — and lawsuits — behind.
The story flashes back to a young Berry Gordy Jr., who has been a failure at pretty much everything he’s done to that point, including a boxing career where he hoped to follow in the footsteps of the Brown Bomber, Joe Louis.
He abandons a steady job at an auto plant to get into the music business, which cost him his first family. He becomes a fairly successful producer and songwriter, he had to ask his other seven siblings if they were willing to risk the $800 to help him start his own record label.
They were, and the rest is history. His discovery of Mary Wells makes her his first full-fledged Motown star, writing hits penned by his pal and future star Smokey Robinson (Jesse Nager).
The biggest acts makes at least a cameo appearance, but the focus is on those who had strong personal connections to the Motown founder: Smokey Robinson, who besides Gordy himself played the biggest role in and making the record label a household name; Marvin Gaye (Jarran Muse), who frequently clashed musically and personally with Gordy; and Diana Ross (Allison Semmes), the headliner of The Supremes with whom Gordy had a relationship, and whom he helped mold into an international music and film star.
Control over many aspects of their life, including their public image, dress, caused many to rebel and eventually split
There’s instant energy when talented young Leon Outlaw Jr. first leads the rest of the Jackson Five on stage, and Outlaw’s vocals as the iconic Michael Jackson are spot-on ; He also doubles as Stevie Wonder, not quite as successfully.
Gordy does stumble by trying to include even hokey moments when Semmes as Ross, recalling a Las Vegas appearance, pulls up audience members to sing alongside her or urges audience members to join hands and sway to “Reach out and Touch.”
It all comes alive in The World According to Berry Gordy, but to his credit the story includes the many bumps and bruises he endured in clashes with his stars, the lawsuits he was entangled in and a history lesson, as he also talks frankly about the role race played in first trying, then succeeding, in getting white DJs or radio stations with white audiences to play his artists’ songs.
It looks and sounds great, with costumes by Esosa, Natasha Katz‘s lighting, and a rockin’ orchestra led by Darryl Archibald cranking out the Motown hits.
Musically, “Motown: The Musical” is pretty much all it was cracked up to be. The story? Well, he who tells the story gets to make himself look good, and Gordy has left one sweet legacy.
The national touring production of “Motown: The Musical.” Book by Berry Gordy. Book and lyrics by the legendary Motown Catalogue. At the Boston Opera House through Feb. 15. http://www.broadwayinboston.com

← There’s not enough there there in ‘Middletown’
Parks’ ‘Father’: Greek poetry meets the Civil War →