BOSTON — Many blacks who migrated north from the South in the decades after the Civil War in search of a better life found heartbreak. They found racism didn’t stop at the Mason-Dixon line and that the same opportunities weren’t available to all.

Even back-breaking work done over a long period of time was no guarantee of pulling yourself out of poverty, or of achieving an better life than the one your parents had.
Esther Mills (Lindsey McWhorter) left her  North Carolina home at the age of 17 after losing both her parents at an early age, bound for New York City.
She becomes a talented seamstress, living in the rooming house of the good-hearted Mrs. Dickson (Cheryl D. Singleton), working long days and saving every penny to amass a stake so she could someday open a beauty parlor that catered to African-American women such as herself. 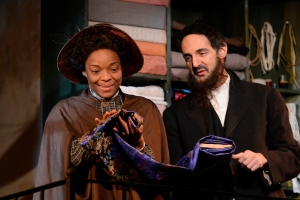 By 1905, her work  had left her with no other life to speak of, and at 35 — after starting work at the age of 9 and after 18 years of hard work in New York — she finds herself longing for the company of a man. That opens the door for the events in the Lyric Stage Company’s production of Lynn Nottage’s powerful, compelling “Intimate Apparel”, which features strong performances and direction by Summer L. Williams that are both pitch-perfect.
As word of her skills spread, Esther’s intimate apparel — corsets, lingerie and other undergarments of the era — were not only being worn not only by prostitutes such as her friend Mayme (Kris Sidberry), but wealthy clients such as her white “friend” Mrs. Van Buren, (Amanda Ruggiero) the embittered trophy wife of a successful businessman who is unable to have children and is often ignored by her husband
“I feel like a tart in the Tenderloin,” gushes Mrs. Van Buren as she dons one of Esther’s creations.
Esther is humble and discrete, two traits that allow her to get and keep clients.
Then comes a mysterious letter from a man named George Armstrong (Brandon G. Green), a Barbadian who has been toiling on the isthmus of Panama building the Panama Canal, hoping to live long enough to have a future with a woman some day.
He learned about Esther from a friend who belongs to the same church as Esther and wants to know more about her.
Esther is illiterate but Mrs. Dickson reads the letter aloud, and cautions her against contacting the man she knows nothing about and encouraging him. But both Mayme and Mrs. Van Buren urge Esther to go forward and reach out to George. They write the letters to George, who writes back often in flowery prose for a laborer.
He eventually proposes to Esther sight unseen, and she is over the moon. But when the couple finally meet and wed, they discover that neither one has been entirely truthful, and it turns out that — for many reasons — George is not the man the letters made him out to be.
Nottage’s characters — both the good and the bad — are not two-dimensional cardboard cutouts. Mayme plays rags on the piano and seems smart and clever enough to have done something else with her life.
George is handsome and not without charm, but frustrated no one will give him a chance, and he instead relies instead on handouts from Esther, who is supporting the family. He rages that no one will give him a chance, including Esther, whose stake meant for the beauty parlor could be the key to his success.
Eventually, Esther will endure several punches in the gut of a most personal nature, but her courage and the dignity with which she has borne herself will remain intact, as well as her faith in a future.
Nael Nacer oozes warmth and humanity as Mr. Marks, as a lonely Jewish businessman who sells fabrics and fashions a relationship of sorts with Esther, a relationship they both treasure but realize will go no further in 1905. At one point, Esther impulsively reaches out and touches him, even though she already know his religion forbids her to do so.
Nottage was inspired to tell Esther’s tale by a photo of her great-grandmother which she found in her grandmother’s house. From that photo sprang a most memorable character vividly brought to life by McWhorter and Williams, a tribute to all the Esthers of the time who fought the good fight in search of the American Dream.
The Lyric Stage Company production of Lynn Nottage’s “Intimate Apparel.” Directed by Summer L. Williams. Other credits: Anne Sherer (set design), Amanda Mujica (costume design), Chris Judacs (lighting design), Kelsey Jarboe (sound design), Stephanie LeBolt (assistant director), and Bryn Austin (dialect coach). At the Lyric Stage Company through March 14. http://www.lyricstage.com.