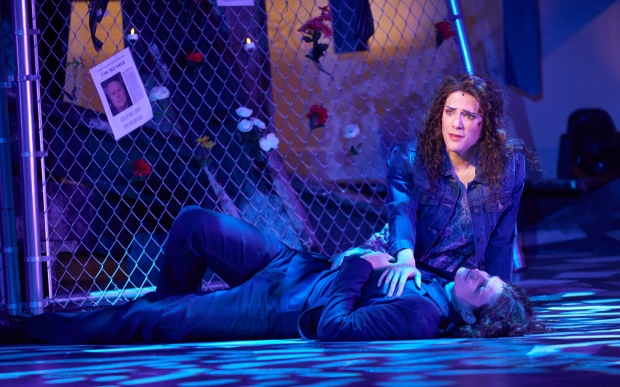 DORCHESTER — When you take a fresh approach to a 2,000-year-old story, the results can be both bold and exciting.

The Fiddlehead Theatre‘s production of the Andrew Lloyd Webber and Tim Rice’s groundbreaking rock operetta “Jesus Christ Superstar” at the Strand Theatre is often both bold and exciting, but it doesn’t always connects the dots between the events around which the updated version is set — 9/11 — and the events surrounding the death of Christ.
Director Stacey Stephens has forwarded the timeline 2,000 years and re-branded the play with the Twitter-flavored handle “#JCSuperstar.”
The piece begins with cable TV programs projected on stage when breaking news interrupts a sitcom. Among the survivors of the World Trade Center disaster is — hallelujah! — one Jesus Christ, who emerges from the ruins with the person he has saved — one Mary Magdalene, a prostitute.
It’s breaking news, to be sure, and the news media laps it up with a vengeance. Celebrity culture was always a big part theme of ‘Superstar,” and it isn’t long in the 24-hour cable TV news cycle until there’s “10 Reasons We Love Jesus” on Buzzfeed.
Friends and associates have a hard time controlling the “spin” around Jesus (Justin Raymond Reeves) as his celebrity takes off. Judas (Devon Stone) takes particular notice that Jesus and his message of peace and love appear to have gotten off track and brings his concerns first to Christ — and ultimately the authorities.
It’s modern-day NYC and not the Mideast for this superstar. Mac Young’s set at first appears to be a cross, but it is a cross made of steel beams, the cross found at Ground Zero after the Twin Towers disaster, and the stage is littered with steel I-beams and cement columns.
Modern-day Jesus breaks through in a big way, with book signings for his best-seller, a 2008 presidential campaign with the slogan “Believe” — intentionally similar to an actual campaign that year, a sign that perhaps Stephens is trying a little bit too hard to fit the events around Christ into the broader historical narrative.
Still, there is fun to be had with headlines such as “Jesus tops on Twitter” and another news story headline with Jesus questioning the Catholic Church’s stance on gay marriage.
The disciples are self-obsessed as The Last Supper becomes an occasion for pizza and fast food and a chance to snap “selfies” with Jesus before Judas commits his traitorous act.
The recurring number “What’s the Buzz?” takes on a whole new meaning in the context of social media and the 24-hour cable news cycle.
Lloyd Webber and Tim Rice’s iconic rock score remains intact but the performances of that score are a bit uneven.
Reeves handles the vocal demands of Jesus competently, but he needs more fire, passion and charisma, allowing us to see more of what the buzz was all about and why we should care.
Devon Stone makes for an oft-haunting Judas, the most dramatic and perhaps difficult role in the piece.
Fiddlehead Artistic Director Meg Fofonoff and Associate Artistic Director Stephens, who directs and designs costumes here, also decided that some non-traditional casting seemed to be in order given the updating, and especially appropriate in the case of the character Mary Magdalene — a prostitute and an outcast, even in today’s social order.
As Magdalene, Scott Caron, a transgender actor, is given some of Rice and Lloyd Webber’s choicest vocal moments — including the iconic ballad “I Don‘t Know How to Love Him” — but his vocals were thin and tight on Friday night, as if his nerves had the better of him. I’d be surprised if he didn’t relax a bit in subsequent performances.
Female actor Katie Howe plays the apostle Peter, and she’s just fine in the numbers where she denies Christ and Christ is arrested.
There is strong support from Christian Mancinas-Garcia as Pilate, while Brian Bakkoffen gives gravitas to Caiaphas and Gene Dante has the vocal chops and rock sensibility to nail King Herod in his jaunty rendition of “King Herod’s Song.”
Balint Varga’s orchestra performs the score with energy and enthusiasm but at times threatened to overwhelm the vocals. For some reason, the Strand often seems to be a difficult venue to get the sound balance just right.
The ending — stark, abrupt, effective — leaves things open as to what happened with Christ after his crucifixion, but the theme of resurrection, of course, can also apply to historical events as well as people.
Stephens’ re-imagining is, again, bold, exciting and well-executed much of the time, but given some of the other shortcomings, the piece should be “#unevenatbest.”
The Fiddlehead Theatre Company production of “Jesus Christ Superstar.” Music by Andrew Lloyd Webber. Lyrics by Tim Rice. Directed by Stacey Stephens. Set, Mac Young. Costumes, Stacey Stephens. Lights, Michael Clark-Wonson. Choreography, Kira Cowan-Troilo. Music director, Balint Varga. At the Strand Theatre, Dorchester, through May 3 Tickets: $25-$45, 617-229-6494, www.fiddleheadtheatre.com.

← Is ‘Ulysses’ a political play? How could it not be?
BCT crafts a professional, powerful ‘Anne Frank’ →