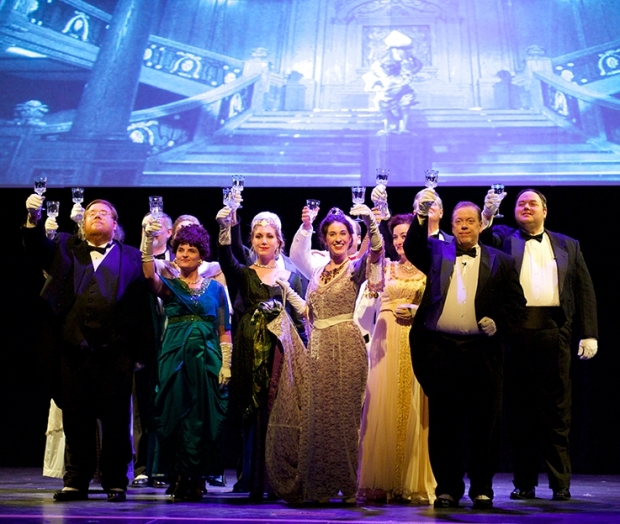 The passengers of the First Class Salon in a scene from the Woodland Theatre Company’s production of the musical  “Titanic.”                      Photo: Frank Hoek Photography

MEDFIELD — With the Boston theater scene so busy almost 12 months of the year, sometimes it’s hard to get noticed when you’re in the suburbs — in this case in the town of Medfield, about 17 miles southwest of the city.

The Woodland Theatre Company opened for business in the fall of 2010 with a production “A Funny Thing Happened on the way to the Forum” before moving to its current home, the Lowell Mason Auditorium on the campus of Medfield High, with its January 2012 production of “Cabaret.“
Woodland’s current production of the musical spectacle “Titanic” through Sunday, May 17, gives full value for the entertainment dollar, and combines strong production values with some very engaging performances.
First of all, give Woodland’s Producing Artistic Director Doug Hodge, who directs the production and also designed sets, and the troupe major points for even undertaking a show that has 41 parts, characters all of who have to be costumed, and — most importantly for the ensemble scenes — blocked.
In a recent performance, there was a very small number of instances when someone was blocked during a scene, and I can’t recall an instance when a character delivering dialogue was blocked.
“Titanic” was an immense undertaking, even by Broadway standards, turning one of the largest sea disasters in maritime history, with 1,500 souls lost, into a musical. But make it they did, with a poignant, funny, ultimately uplifting book by Peter Stone (“1776”) and a moody, tuneful score by the underrated Maury Yeston (“Phantom”).
“Titanic” reaped five Tony Awards in 1997, including Best Musical, and even coined the term “disaster operetta.”
Delightful Yeston tunes become well-staged production numbers as Hodge lines up his full company along the ship’s railing for “Godspeed Titanic.”
Perhaps the best number is the first act’s “The Lady’s Maid,” when Katie Preisig shines as a buoyant Kate McGowen, singing from the heart about her new future in America, made even more poignant and powerful by our knowledge that she will never make it.
Stone’s book looks at the Titanic voyage from several different angles, including from above, the crème de la crème in First Class, the leading lights of the day, looking to maintain their positions by being part of the maiden voyage of the newest, fastest, largest ship afloat. They are tended to by Steward Henry Etches (Stephen Lee), who is properly deferential.
Athan Mantalos’ J. Bruce Ismay, chairman of the White Star Line is a bit of a cardboard cut-out villain, but his hubris will, of course, have tragic consequences.
Brain Vaughn Martel is solid as Andrews, the tortured architect of Titanic, but during a recent performance he had huge problems being heard over the orchestra, especially when he sang on the same side of the stage of the orchestra, which was situated to the right of the stage. That included both “In Every Age” in the first act and the despairing “Mr. Andrews’ Vision” in the second act.
Christopher Holownia’s orchestra performed a tricky score with energy, enthusiasm and skill; perhaps he could find a way to rein his musicians in a bit on the quieter pieces when an actor is struggling to be heard.
The finest performance on a recent evening was by Daniel Forest Sullivan as Stoker Frederick Barrett, a member of the crew who kept the three huge boilers of the Titanic running.
Sullivan has the pipes to easily reach the last row, and his numbers — “Barrett’s Song” and the later “The Proposal/The Night Was Alive” with Wireless Operator Harold Bride (Josh Wright) — are perhaps the sweetest of the production, as Barrett strives to pronounce his longing for his love and Bride expresses his wonder at the awesome responsibility he has.
While the first act is all about the hope, optimism and wonder at the marvel White Star Line has wrought, the second act of “Titanic” is all about regret: The iceberg warnings that were not heeded, the decision to take a Northern route to save time, the decision to constantly increase speed in hopes of setting a record for a Trans-Atlantic crossing.
James Tallach is a well-regarded local actor/director and he lends the needed gravitas to the role of the ill-fated Captain Smith, for whom the loss of his own life is almost secondary to the loss of his reputation as a careful, caring captain with a flawless safety record for 42 years. He writes his own obituary in the moving “To Be a Captain.”
Stone has built some comic relief into the piece, with Margaret Felice Edgar’s portrayal of second-class passenger Alice Beane, whose unbridled social climbing and longing to become part of the upper strata puts her at odds with her everyday guy of a husband (Brian Higgins).
Mark Estano also has a nice turn as The Major, whose war stories drone on and on, even in the midst of catastrophe.
Woodland’s staging and production values are worthy of a far larger company. Seif Salotto-Cristobal ’s en pointe projections include plans of the Titanic, allowing the action to slide quickly and easily around the ship; the timeline projected above the action in the second act as helps ramp up the intensity as the inevitable demise looms ever closer. The list of the dead is a final — and most effective — projection.
The projections and lighting by Salotto-Cristobal work well with Hodges’ set, which largely suggests the massive ship offstage, and includes rails that can be moved or joined together to become a deck. He also effectively recreates the wheelhouse, the first class salon, and steerage areas where third-class passengers and some staff lived.
With its production of “Titanic,” Woodland has declared there is no show too big, too complicated, too technically involved for it to stage. And that’s quite a bold statement for a troupe that has yet to celebrate its fifth birthday.
The Woodland Theatre Company production of the musical “Titanic.” Book by Peter Stone. Music and lyrics by Maury Yeston. Direction: Doug Hodge. Props: Carol Kingsbury.  Set design: Doug Hodge. Lighting and Projections: Seif Salotto-Cristobal. Costume Design: Regina O’Connor. Stage Management: Mary Ann Hatem. Musical Direction: Christopher Holownia. At the Lowell Mason Auditorium at Medfield High through May 17. http://www.woodland-theatre.com.

← How did we get here? One day, ‘Mr g’ was bored
McNally broke new ground with ‘Mothers & Sons’ →