Sorkin’s ‘Invention’ brings the race for TV to life 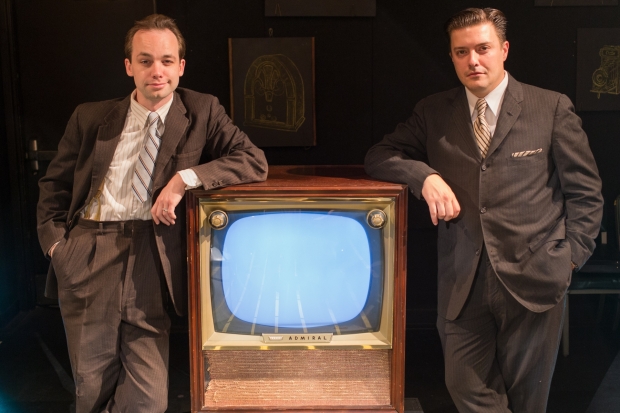 WATERTOWN — There are usually tragic consequences when a magnificent obsession is derailed.

It is a topic that was explored earlier in this theatrical season in the Huntington Theatre Company’s production of Elizabeth Egloff‘s “Ether Dome,” the story of Hartford dentist Horace Wells’ discovery of the use of nitrous oxide as an anesthesia for operations, paving the way for the eventual use of ether anesthesia by his former student William Morton.
Morton didn’t credit Wells for his role in the discovery, passing it off as his own and eventually leading to Wells’ suicide. It was only after his death Wells received credit.
Now comes The Flat Earth Theatre’s production of Aaron Sorkin‘s “The Farnsworth Invention” at the Arsenal Center for the Arts. An engrossing, exciting, suspenseful look at the race to invent television, it is a worthy successor to the troupe’s February production of “Terra Nova.”

Sorkin has found a way to pay tribute to those pioneers who created the medium that made him rich and famous with series such as “The West Wing” and “The Newsroom.”
Philo Farnsworth (Chris Larson) is born in Utah but later grows up small Idaho town, the son of a farmer but a scientific prodigy, at 13 spouting outrageous theories concerning images that might someday be transmitted electronically, and describing the basic principles.
Meanwhile, David Sarnoff (Michael Fisher) comes to this country at the age of 10 after Russian Cossacks burn his family’s home to the ground, and through ambition, talent and — yes, a little luck — works his way up to lead the communications giant RCA Victor.
Sarnoff is arrogant, driven, profane and ruthless: in short, the absolute model of many successful entrepreneurs and capitalists of the time.
But Sarnoff is not a scientist. He is a businessman, albeit one with some lofty ideas — early on, he sees radio and TV as forces to enlighten and inform and not as vehicles for selling ads — but he does realize that he who invents a working television first will reap the riches and rule the world.
Larson’s Farnsworth is brilliant, driven, insanely hardworking and loyal to those who join him when he finally obtains the financial backing to open a California lab and begin his quest: supportive wife Pem Farnsworth (Katharine Daly), sister Sophie Farnsworth (Sophie Sinclair), student Stan Willis (Matt Arnold) and Pem’s brother Cliff Gardner (Robin Gabrielli), who makes a key discovery for the team.
They other members of the sterling ensemble — Andy Hicks, Justus Perry, Korinne T. Ritchey, Noah Simes and Dale J. Young — move quickly and effortlessly among a myriad of supporting roles.
Sorkin structures his piece as a bit of a dramatic free-for-all, allowing both Sarnoff and Farnsworth to jump onto the action at will, to clarify or explain, address each other directly or comment on the other‘s doings.
At its heart, this is a David vs. Goliath struggle that has us rooting for David even while we realize that Sarnoff’s money and power will eventually grind him down.

Ingenuity and creativity were the hallmarks for the production values of “Terra Nova” and here the stage is simply set, with light bulbs festooned from above, much like the vacuum tubes that will be an essential part of early TVs.
The production uses simple blackboards to present theories and formulas, or drawings on blackboards to represent objects such as radios. The extensive use of more props or the movement of set pieces might have slowed the flow of the production.
“The Farnsworth Invention” could have drowned in techno-speak but Sorkin’s dialogue sings, even when he is knee-deep in the nitty-gritty of transmitting electrons.
Sorkin tries not to get bogged down in the seemingly endless legal patent fights between Farnsworth and Sarnoff and RCA, who declared that the innovation was the work of its chief television engineer, Vladimir Zworykin, who becomes a key figure late in the play.
In 1935, the courts ruled on Farnsworth’s patent, naming him television’s father. The decision was upheld on appeal, although Farnsworth continued to get little recognition in the real world.
Director Sarah Gadzowicz and her cast wring all the suspense and pathos out of Sorkin’s piece and the timing is en pointe, as the action shifts back and forth between Farnsworth’s struggles in California and Sarnoff’s machinations in New York.
There have been grumbles from Farnsworth’s family and others because of Sorkin’s creative license, including a dramatic meeting between Sarnoff and Farnswroth that Sorkin later admits never actually happened, and some other historical inaccuracies.
History usually, eventually gets it right and just as it eventually recognized Wells as the father of modern anesthesia, if you Google the term “inventor of television,” Wikipedia serves up a photo and bio of one Philo T. Farnsworth.
So Philo Farnsworth — the man who once predicted man would get to the moon during the 20th century and we’d watch it on television — did win, even if he never got the credit, fame and wealth he deserved before he died in 1971. Sorkin’s absorbing race for the Holy Grail brings it all to life and is a worthy tribute to Farnsworth’s magnificent obsession.
The Flat Earth Theatre production of Aaron Sorkin’s “The Farnsworth Invention.” Produced by Lindsay Eagle. Directed by Sarah Gadzowicz. At the Black Box Theatre at the Arsenal Center for the Arts in Watertown through June 27. http://www.flatearththeatre.com.

← ‘After All’: A powerful look at bullying, redemption
‘Newsies’ leaps off the stage of the Opera House →