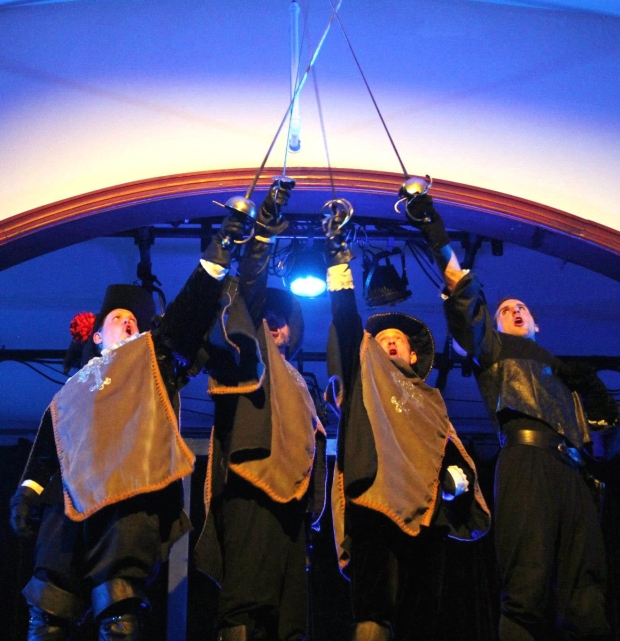 Jesse Sullivan, David Friday, Derek Martin and Terrance J. Ganser are “All For One” in “The Three Musketeers.” Photo: Morgan Lewis

PLYMOUTH — It’s always good news when a new performance space comes on-line.
It’s very good news when that performance space features a strong theatrical production.
The Spire Center for the Performing Arts on Court Street in Plymouth Center actually opened in April 2014 and has been hosting a variety of events.
This summer the Americana Theatre Company has come to the Spire for the first time with its production of Ken Ludwig‘s adaptation of “The Three Musketeers,” on stage through July 25.
Ludwig’s adaptation of the venerable, sweeping Alexandre Dumas tale was commissioned by the Bristol Old Vic in England and is full of great good humor, and distills the novel into a compact 21/2 hours, including intermission.
The Americana troupe, based in Plymouth, has been in existence since 2011 and melds seasoned professionals with up-and-coming talent and college interns.
The 22-member troupe for this production includes 13 professional actors and nine college interns and benefits greatly from both the know-how of its experienced members and the energy, enthusiasm and, quite obviously — the skills — of its youthful members.
There are many swashs to be buckled here, so kudos to fight director Michael Hill-Kirkland as both the males and females are in good form as far as the swordplay is involved. 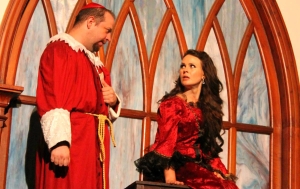 It is 1625 France, and in Gascony there is a restless young man named d’Artagnan. The piece is going nowhere without a dashing d’Artagnan and Terrence G. Danser does cut a dashing figure indeed as the brash young warrior and son of a Musketeer who goes to Paris in search of adventure, accompanied by his sister Sabine, destined for a convent school but for safety’s sake disguised during travels as a man.
D’Artagnan soon bites off more than he can chew when he picks a fight with not one, not two, but all three musketeers.
The musketeers are in the capable hands of Jesse Sullivan (Athos), David Friday (Porthos), and Derek Martin (Aramis), the company’s artistic director who also provided choreography and scenic design. It all works out, and soon all four — make that five, including Sabine — are friends.
The musketeers and d’Artagnan are a formidable fighting foursome, especially when they join forces to protect the honor of Queen Anne (Beth Litwack), under siege due to the machinations of the scheming Wade Dunham as Cardinal Richelieu — a clergyman who knows how to play all the angles and pull all the strings when it comes to the hapless King Louis XIII (Simon Kiser).
Kiser’s King Louis comes off as whiny, weaselly, wishy-washy sort, easily led by the nose.
Joshua Nicholson provides a skilled comic turn as Rochefort, the cardinal’s henchman who is also a hapless foil for the musketeers and d’Artagnan.
The females in the cast are strong across the board, led by Litwack as Queen Anne. Jennifer Martin shines as the countess, Milady de Winter, whose past history with one musketeer and her beauty and cunning makes her an invaluable ally to Richelieu and a dangerous enemy to d’Artagnan and The Musketeers.
Amelia Dobbs is a spunky Sabine, the tomboy sister of d’Artagnan who complicates matters early on but later proves invaluable.
Kelly Ann Dunn is also fine as Constance, lady in waiting to the queen and d’Artagnan’s love interest.
Director Marianne Savell keeps the action fast-paced, as a swashbuckler should be.
Grant‘s minimalist multi-level set provides several levels for swordfights, and easy access and exits for needed escapes.
In this production costumes take center stage, and C.J. Hill’s creations jump off the Spire Center stage while Joshua Nicholson’s music provides context and sets just the right tone.
The good news about the Spire Center — located at 25 Court St. in the heart of downtown Plymouth — is that the pews of the former church have been comfortably retrofitted with padding, and on a recently warm evening the building was also nicely air-conditioned.
A bar in the rear of the building serves reasonably-priced cold drinks, including beer and wine.
With ticket prices $25 for general admission and $20 for students, “The Three Musketeers” is not only exciting, fast-paced, well-acted fun, it also happens to be an excellent value for your entertainment dollar.
The Americana Theatre Company production of “The Three Musketeers.” Adaptation by Ken Ludwig, based on the Alexandre Dumas novel. Directed by Marianne Savell. Fight direction by Michael Hill-Kirkland. Choreography by Derek Grant Martin. Costumes by C.J. Hill. Sound design by Joshua Nicholson. Lighting design by Brittney Reinert. Set design by Derek Grant Martin. Production stage manager: Brittney Reinert. At the Spire Center for the Performing Arts through July 25. http://www.americanatheatre.org.

← Reagle gives the classic ‘Kiss Me, Kate’ its just due
Nora’s ‘Saving Kitty:’ Stifler would be very proud →