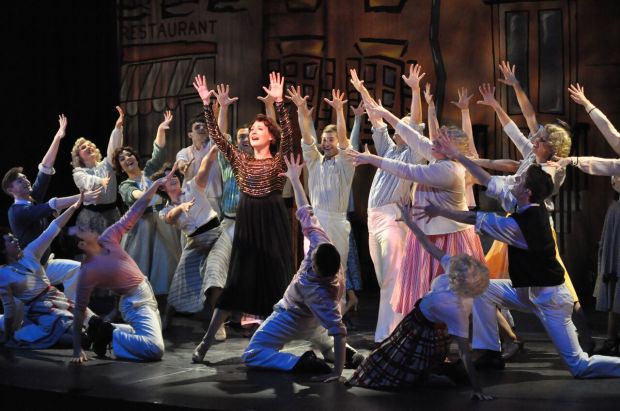 WALTHAM – For many years, Bob Eagle and the Reagle Music Theatre of Greater Boston had a business model that worked for them.

Bring in a big name – a Shirley Jones, Debbie Reynolds, Sally Struthers and Lee Meriwether – familiar to almost all of those who are regular patrons and surround them with local talent,.

Eagle has tweaked his business model a bit in recent seasons. The young local talent is increasingly taking center stage, with the exception of old friends such as Sarah Pfisterer and Rick Hilsabeck, who headlined this season’s production of “Kiss Me, Kate,” or frequent visitor Brent Barrett in “Guys and Dolls.”

Reagle’s current production of “Wonderful Town,” which features Jennifer Ellis and Katie Ann Clark, two of the area’s brightest young talents, is a charming, funny, oft-spectacular musical concoction. “Wonderful Town” is the adaptation of the play “My Sister Eileen” by Joseph Fields and Jerome Chodorov, which itself is based on the short stories of Ruth McKenney, with lyrics by Betty Comden and Adolph Green and music by the incomparable Leonard Bernstein.

It isn’t Bernstein’s best score. How could it be when you have “Candide,” “On The Town” and “West Side Story” on your resume? But it does have its moments, including numbers such as “A Little Bit in Love,” “A Quiet Girl” and the plaintive “Ohio.”

It is Greenwich Village in 1935, and all manner of quirky characters abound – think the opening scene of “Guys and Dolls,” “A Fugue for Tinhorns.” Two sisters have left Columbus, Ohio bound for glory in Manhattan.

Coming off her role as the gum-snapping, big-haired hairdresser in Gloucester Stage’s “Out of Sterno,” it’s become apparent Ellis can do almost anything she’s got a mind to, and that including playing in this instance Eileen Sherwood , a blonde aspiring actress and man magnet who leaves a trail of would-be suitors in her wake, including drug store clerk Frank Lippencott (Dan Prior) and oily reporter Chick Clark (Doug Gerber).

The high point comes when she is taken into custody after a raucous conga party at her apartment but soon has an entire police precinct at her beck and call (“My Darlin’ Eileen”) and eating out of her hand.

And as good as Ellis is, she’s often upstaged by Clark – a newly-minted member of Actor’s Equity – as Ruth, who dreams of making it as a writer and with a man, and not necessarily in that order. While Eileen is beating the men off with a stick, Ruth ponders “One Hundred Easy Ways” to fall flat when it comes to love.

Clark has a gift for comedy – screwball comedy, in particular – that she has showcased in shows such as Moonbox Productions’ “Musical of Musicals.”

The Sherwood sisters find themselves soon after their arrival in New York esconced in a fleabag cellar apartment wracked by frequent blasting in the subway. David Carney and Julianne Daly provide comic relief as Wreck and Helen, the woebegone, penniless next-door couple trying to hide their living arrangements from Helen’s mother.

Kevin Cirone comes straight from Central Casting and has the requisite leading man’s looks and voice as Baker, the editor who spikes Ruth’s dreams before lifting her up again

But what makes this production really sing is some superb choreography by Eileen Grace that includes a piece of just about every genre, up to and including a conga line and an Irish jig.

Director David Hugo is helming his fourth Reagle production after a string of critical successes and artistic director Eagle must like what he sees. Not everyone is up to the task of getting a huge cast all rowing in the same direction in lavish production numbers.

There’s nothing wrong with the star power of a Shirley Jones or Sally Struthers. My belief is that by featuring the best young local talent available, the Reagle Music Theatre can continue to remain vibrant and viable in the years ahead.

The Reagle Music Theatre of Greater Boston production of “Wonderful Town.” Book by Joseph Fields and Jerome Chodorov, based on the play “My Sister Eileen.” Lyrics by Betty Comden and Adolph Green. Music by Leonard Bernstein. Choreographed by Eileen Grace. Music directiion by Dan Rodriguez. Directed by David Hugo. At the Robinson Theatre through Aug. 16. http://www.ReagleMusicTheatre.com. 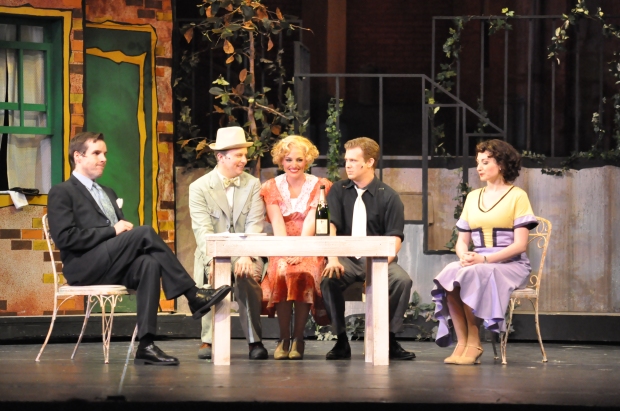