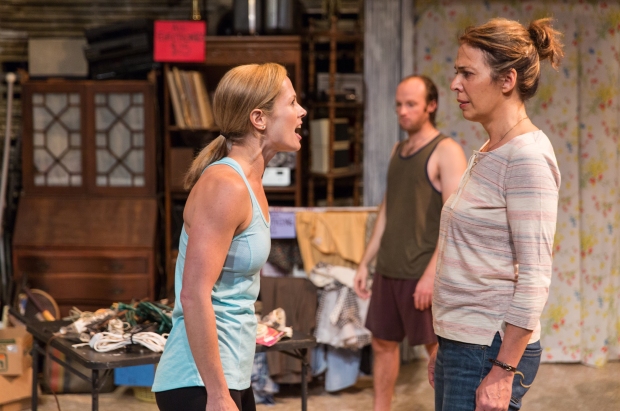 BOSTON – It is risky business when we start unearthing the past. There are interesting, sometimes valuable objects and artifacts to be discovered, to be sure, but when we start disturbing secrets that seemed safely buried, all bets are off.

The Lafayette family has gathered in the family’s plantation-style home in southeast Arkansas in summer after the death of their patriarch, and it is a time for rehashing not only stories about their father, but revisiting their troubled relationships in the Speakeasy Stage Company’s powerful production of Branden Jacobs-Jenkins’ Obie Award-winning “Appropriate.”

There are back stories and back issues that have to be resolved as three siblings plan an estate sale and the liquidation of their father’s assets, including the decrepit plantation home which once housed slaves and where the action is sited. 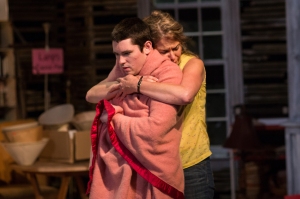 One of the stars of this production of “Appropriate” is the set by Cristina Todesco. The versatility of the Roberts Studio Theatre in the Calderwood Pavilion of the Boston Center for the Arts lends itself to the expansive, detailed set here and sets in other productions such as last season’s “Come Back, Little Sheba.”

The once-grand building now houses a haphazard collection of items in a downstairs living room and an upstairs collection of bedrooms.

The entire piece is played amidst sound designer Arshan Gailus’ backdrop of ever-present cicadas, their presence at times becoming overwhelming.

Because she wears so many theatrical hats, sometimes you forget just how fine an actress Melinda Lopez is, and as Toni, the oldest Lafayette child, a divorcee with a teenage son named Rhys (Eliot Purcell), she sets the tone for the entire cast.

Bo Lafayette (Bryan T. Donovan) lives in New York City with his Jewish wife Rachael (Tamara Hickey), who considers herself an outsider and is on the defensive from the moment she steps foot into the Lafayette home with the couple’s 14-year-old daughter Cassidy (Katie Ellinoff) and 8-year-old rambunctious son Ainsley (Brendan O’Brien).

Bo expresses weariness at the situation, which has cost him dearly in capital, but he hasn’t expended nearly as much human capital as Toni, who often stepped into the breach when help was needed at the home, which her father shared for years with Franz, formerly Frank, the youngest of the Lafayette siblings. Alex Pollock is Franz, the family outcast, who has gotten involved in a scandal with an underage girl that forced him to leave; Pollock has shined in outsider roles  in shows such as “The Aliens” and “The Flick,” and here he  is a misunderstood soul — at least in his own mind — struggling to regain his footing with the aid of his young finacee, River (Ashley Risteen).

In his script notes that are also included in the program, Jacobs-Jenkins makes it a  point to note the various meanings of the word “appropriate.”  In the construction of his play, Jacobs-Jenkins says he has “appropriated” elements of family dramas that have come before in plays such as “August: Osage County” or the Horton Foote dramas.

He also wants us to consider just what is “appropriate” when it comes to behavior: When a book is found in the father’s study – not just a book, but a book of gruesome photos of dead African-Americans – it launches a discussion of what is appropriate for children to see, while also introducing the element of greed when it appears the photos might be valuable.

And is it appropriate for vulnerable young teen Cassidy to have a Facebook relationship with her Uncle Franz, who has shown a strong preference for younger women?

Jacobs-Jenkins gives each of the characters in turn a chance to air his or her grievances, which eventually ends in an all-out family brawl worthy of the best of the WWF. He has a wonderful ear and feel for dialogue and the kind of vicious back-and-forth of a family in crisis.

There are not one but two cemeteries on the Lafayette property, including a graveyard of slaves who once worked on the plantation, and the playwright strongly suggests suggests that spirits of those who lived and died on the property may not be at rest.

“Appropriate” plays out much like a roller-coaster ride with turns you don’t see coming, as the mood lurches from laughter, to horror and ultimately despair, at a child’s horrifying discovery.

In the aftermath of the apparent disintegration of the family, Toni will tell her siblings “If anyone asks, I want you to tell them that this was the weekend your sister died.”

And while Bo vows to take care of the situation with the home, the concluding scenes will show yet another unkept promise.

Director M. Bevin O’Gara’s pacing is strong, with perhaps a short slack area in the second act before all hell breaks loose.

The ending is disquieting. Jacobs-Jenkins asks a lot of questions and doesn’t always provide you with satisfying answers that will allow you to go gently and quietly into the good night.

Through it all sounds a cautionary note: once you dig something up, it becomes a permanent part of you.

The Speakeasy Stage Company production of Branden Jacobs-Jenkins’ “Appropriate.” At the Roberts Studio Theatre in the Calderwood Pavilion of the Boston Center for the Arts through Oct. 10. Set design by Cristina Todesco. Costume design by Tyler Kinney. Lighting by Wen-Ling Liao. Sound by Arshan Gailus. Fight choreography by Angie Jepson. http://www.speakeasystage.com.