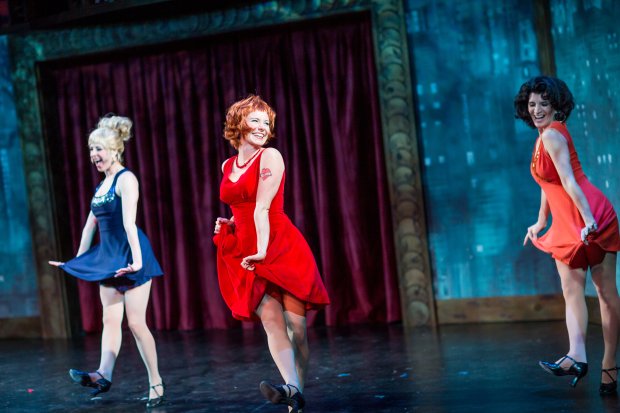 STONEHAM – The choreography of the late Bob Fosse is so singular that it seems you might recognize it blindfolded, just by the sound of the tapping of feet on stage.

The angles, athleticism and physical demands it places on dancers make it difficult to  execute, but when it works, IT WORKS.

The Stoneham Theatre production of “Sweet Charity” works because of the charms of the actress playing the title role – Vanessa Dunleavy – and nonpareil director/choreographer Ilyse Robbins, who picks up on the style of the original Fosse choreography but makes it her own.

Robbins seamlessly made the transition years ago from choreographer to choreographer and director, and her dance numbers lift every show she directs.

The Fosse style  is unmistakable in “Charity.” The set-up for this show’s “Hey, Big Spender” number, for instance, will resemble the sexier dance numbers in his later musical “Chicago.”

The score by Cy Coleman and Dorothy Fields is bouncy and bright, and the book is by Neil Simon, perhaps the greatest writer of Broadway comedies for the stage – his Brighton Beach trilogy is brilliant.

Simon’s book is based on a screenplay by Federico Fellini, Tullin Pinelli and Ennio Flaiano, which has been leavened by Simon’s wit and his feel for New York City and its characters.

Vanessa Dunleavy walks a fine line in the title role as Charity Hope Valentine, a dance hall hostess in 1960s New York City, a sexy and earthy woman still clinging to a sense of innocence and trust that has her believing Mr. Right is right around the corner – in fact, she might even be dancing with him in the next few minutes.

She believes in love, and that belief sustains her during the innumerable dances for money in the Fandango dance hall. It is what allows her to survive in a world where her recent live-in boyfriend absconds with her $200 and then pushes her into a lake, leaving her to drown if not for the kindness of a passer-by from a foreign country, and not a native New Yorker, as Simon wryly notes.

The musical is replete with some quirky characters. Andrew Giordano rarely gives a bad performance and the part of Italian matinee idol Vittorio Vidal is right in his wheelhouse, as he is gloriously over the top as a sweet but vacuous Lothario who sees something in Charity that causes him to temporarily forsake his lover Ursula (Deirdre Burke), allowing Charity to celebrate her good fortune and strut her stuff in “If They Could See Me Now.”

And while Charity is good at repairing others’ love life, she’s not too good when it comes to her own, at least until Nick Sulfaro – an even quirkier character as the accountant Oscar –and Charity come together in a stalled elevator. Charity helps him overcome his anxieties and it appears she has finally found true love – or has she?

Steve Gagliastro is a fine comic actor who played opposite Dunleavy in the Stoneham musical “The Addams Family” and here as Fandango Dance Hall owner Herman he mostly barks at the dancers, but he does have fun with the number “I Love to Cry at Weddings.”

David Liles Jr. has his moments as Big Daddy Brubeck, the pastor of the Rhythm of Life Church who raises the rafters in the production number “Rhythm of Life.”

The best of the dance numbers? Perhaps the stirring anthem “I’m a Brass Band” with Dunleavy fronting an energetic quartet of male dancers.

Christine A. Maglione and Maria LaRossa are dance-wise right there with Dunleavy as Nickie and Helene, her long-suffering co-workers at the Fandango. Other dancing highlights include the trio in “There’s Gotta Be Something Better Than This,” while Maglione and LaRossa also shine in “Baby Dream Your Dream.”

And while not all members of the ensemble are up to the level of Dunleavy, Maglione and LaRossa, it doesn’t really dim the overall effect of the production numbers.

Jon Savage’s set features a skyline/cityscape background, and the orchestra is atop a balcony above the stage where some of the action also takes place, with a staircase leading down to the stage.

The modest six-piece band led by Bethany Aiken plays with energy, and they cover the necessary musical bases and are adequate for an intimate theater such as Stoneham.

It’s a bittersweet musical with a bittersweet ending, befitting the Fellini screenplay it was based on, but Dunleavy’s winsome lead character and Robbins’ adroit casting and choreography make “Sweet Charity” a sweet theatrical treat.

← A king’s fast fall from grace in ASP’s ‘Richard II’
Huntington’s ‘Can You Forgive Her?’ is a mixed bag →