Lavish, loving ‘Show Boat’ is the king of the river 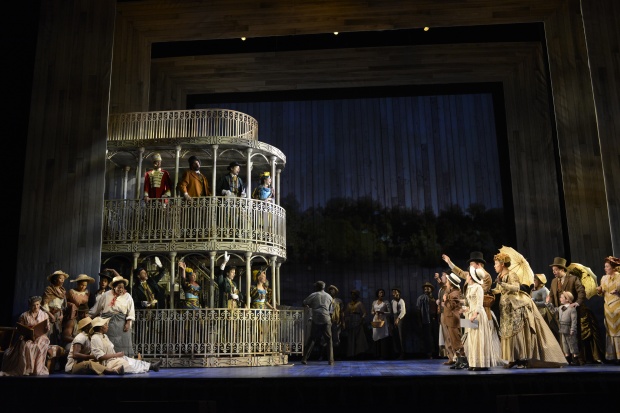 The co-artistic producers of the Fiddlehead Theatre Company have reached for the stars with a lavish, loving production of “Show Boat” at the Shubert Theatre that checks all the boxes when it comes to quality theatrical entertainment.

Stephens and Fofonoff are co-directing an excellent 50-strong cast – including several Broadway veterans and 23 (!) Actors Equity players — and a bevy of fine voices, all of which has allowed the classic to be presented in its full glory.

The 1926 novel by Edna Ferber became Jerome Kern and Oscar Hammerstein II’s 1927 musical “Show Boat” while also being adapted three times for film. It plays out over three generations and 40 years – from 1887 to 1927 – up and down the Mississipi River and Chicago. 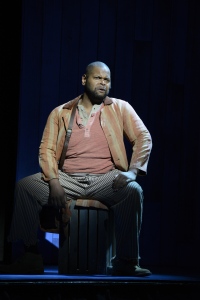 Trouble ensues when a former beau of Julie’s drops a dime with the sheriff of Natchez, Miss., informing him that Julie’s mother was black and that her marriage to Steve is illegal.

Sarah Hanlon will break your heart as Julie, the mixed-race singer who loses her job on the boat – and eventually her marriage. After Julie and Frank are forced to leave the boat, Magnolia becomes the lead in the show, along with someone whose acquaintance she had earlier made by chance: Gaylord Ravenal (Jeremiah James), a dashing riverboat gambler who becomes her partner onstage and, eventually off.

“Show Boat” was not only one of the first integrated musicals, but its African-American characters play major roles and perform several key musical numbers.

The book by Ferber and the adaptation by Hammerstein doesn’t skimp or turn away from the plight of blacks along the river, who toiled endlessly on the docks and were kept under the thumb of the Jim Crow laws in effect during the 40 years of the piece.

The black stevedore Joe (Brian Kinnard) in his booming bass and joined by his fellow stevedores, imbues the classic “Ol’ Man River” – and several reprises – with world-weary heart and soul.

Fofonoff defended the use of a racial epithet by one of the characters – to her credit – in an interview with the Quincy Patriot-Ledger. “A lot of people take it out, but we haven’t made changes. It’s horrifying to hear, but that was the reality of the time. I don’t think we get anywhere by pretending that something didn’t happen.”

Lindsay Roberts plays Queenie the cook with warmth and flair and delivers the goods vocally in “Can’t Help Lovin’ Datt Man” and “Misery.”

Eventually Magnolia and Gaylord marry and have a daughter named Kim, and like Steve and Julie, move to Chicago, where the two wives are deserted by their husbands. Gaylord, despite his love for his wife and daughter, leaves them when his money – and luck – runs out.

There will be much travail and tears before Gaylord, Magnolia and an older Kim (Megan Yates) – by then a performer herself – reunite.

The role of Cap’n Andy Hawks was made for a gifted comic actor such as John Davin, a Fiddlehead mainstay for years, and he shines as the genial, warm-hearted boss who is continually at war with the “real boss,” wife Parthenia (Dawn Tucker).

It was a warm, winning touch when Davin entered last during the curtain call, a spot usually reserved for the star of the show; undoubtedly a nod to his talent and professionalism as well as what he has meant to the company through the years.

Kathy St. George defines the word professional, and she is onstage throughout as the older Kim Ravenal, looking back at the lives of her parents and grandparents through a scrapbook.

The production values are first rate. The wonderful period costumes – 300 in all – were created by Stephens, with assistance from Elisabetta Polito, and the deft, colorful, high-definition projections by Kevan Loney allow the Mississippi to be free-flowing throughout the evening.

Wendy Hall’s choreography is spectacular throughout, rightup to and including the closing Charleston kick line.

The set by Paul Tate dePoo III includes the wrought-iron decks of the showboat which are frequently moved and become something else, including the balcony of the Trocadero nightclub in Chicago.

Sound design has been problematical for Fiddlehead in other venues but Brian McCoy’s sound design here makes that a distant memory.

The superb orchestra conducted by Charles Peltz gives full, glorious voice to the Kern-Hammerstein score, which has stood the test of time. This production uses the orchestration of the Broadway revival, which calls for 27 instruments, twice the number of most musicals.

While Fiddlehead spent the previous three seasons at the Strand Theatre in Dorchester, the troupe struggled to get theater-goers accustomed to going to shows in downtown Boston on board.

Now firmly esconced in the Theater District,” “Show Boat” marks the beginning of a three-show Fiddlehead season at the Shubert which will also include “Priscilla, Queen of the Desert” (Sept. 30-Oct. 9) and “Carnival” (May 5-14, 2017).

If you see enough live theater, you’ll find there is a subtle body language that performers use to convey the experience they are having on stage, and the cast of “Showe Boat” is all in both the experience and the excution.

If the entire cast of 50 joining in for a joyous, glorious encore of “Can’t Help Lovin’ Dat Man” and a Charleston kickline of black and white dancers doesn’t give you goosebumps, check your pulse and watch the papers for your obit.

← ‘Blinders’: A fool and his vote are soon parted
It’s pure Bedlam in raucous ‘Twelfth Night’ →