‘Mary Poppins’ is practically perfect in every way

The North Shore Music Theatre’s production of Disney’s “Mary Poppins” combines Disney magic with its own kind and the result is a joyously spectacular production that will please both the young and young at heart.

July is the month that NSMT has traditionally presented its family musical, and owner Bill Hanney has preserved that tradition since he took over the theater.

The resulting “Mary Poppins” is easily the most visually stunning show the theater has produced in the 25 years this critic has been covering it, with state-of-the-art special effects, innovative scenic designs and lighting, colorful costumes and production numbers that explode with energy.

There’s pleasure to be had in little touches and details by Scenic Designer Bert Scott, such as chimneys scattered around the theater belching smoke as you might see on the rooftops of London at the turn of the 20th Century. 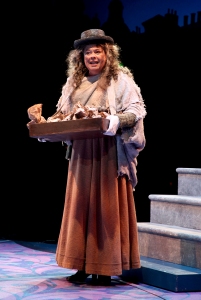 If you saw the movie “Saving Mr Banks,” you know the work that Walt Disney had to do just to get P.L. Travers to give him the right to adapt the stories for the Oscar-winning 1964 film, and eventually the stage adaptation, which has won 44 major theater awards since Disney and Cameron Mackintosh co-produced it.

You won’t know where to look first – there’s Kerry Conte as Mary Poppins flying across the stage in one direction and kites flying in other directions. Detailed scrims replicate the London cityscape, but also double as screens for the beautifully realized projections. The theater’s general manager, Karen Nascembeni, said after a recent performance that it is the most technically challenging show the theater has even produced.

Yes, there is a danger that it could overwhelm the story and the characters, but NSMT Artistic Director Kevin P. Hill, who directs and choreographs, never lets that happen.

Conte, as the mysterious nanny who arrives with the wind and leaves when the wind changes, is up to both vocal and acting demands of the role.

Brad Bradley exudes the requisite roguish charm as Bert, the part-time chimney sweep/busker/artist who works with Mary to help the Banks children find the magic they’ve missed all around them.

are two of the more difficult roles in the musical theater canon for young actors and actresses and are performed beautifully by Scarlette Keene-Connole and Jake Ryan Flynn, who exhibit a high level of consistency in both acting and singing; their voices complementing each other and in sync with Conte as Mary Poppins.

James Andrew Walsh has a deceptively challenging role as George Banks, the stiff banker whose upbringing with distant parents has left him distant from both his children and his wife Winifred (Molly Garner), who expresses her frustrations and joys of being a wife and mother in “Being Mrs. Banks.”

Local actress Ellen Peterson has crafted quite a fine career in supporting parts and she scores again as the harried housekeeper Miss Brill and as the Bird Woman who performs the heartbreakingly beautiful “Feed The Birds,” purported to be Walt Disney’s favorite song from the film.

Again, Hill’s direction and choreography incorporate the special effects and the other visual and aural elements without them overwhelming the story at the heart of the piece.

And, as he has shown in past Beverly productions, he has a profound understanding of the intricacies of choreographing for the in-the-round stage, and the production numbers show it, with “Step in Time” and its chorus of dancing sweeps having the audience standing and roaring.

To flesh out the film score by the Oscar-winning Sherman brothers for the stage adaptation, the producers brought on board George Stiles and Anthony Drewe, whose “Honk!” was a huge hit at NSMT. The songs from the film – “A Spoonful of Sugar,” Let’s Go Fly a Kite,” “Chim Chim Cher-ee,” “Supercalifragilisticexpialidocious,” “Jolly Holiday With Mary,” “Feed the Birds” “Step in Time,” – are all included as well as the new Stiles-Drewe tunes, the best of which are “Practically Perfect,” “Anything Can Happen if You Let It.,” and “Being Mrs. Banks.”

The score is beautifully performed by the orchestra led by Milton Granger.

If you are introducing a child to the wonders of live theater with this production, you have done him or her – and the theater world, as well – a huge favor. They are likely to become a fan for life. 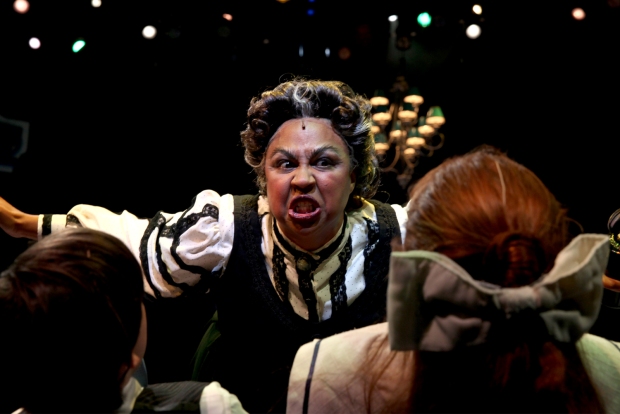