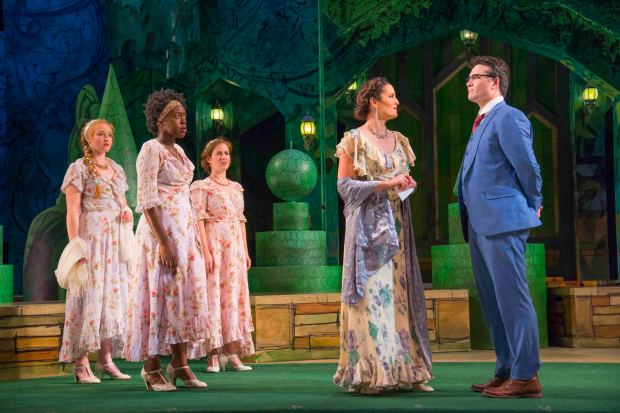 BOSTON – You don’t actually have to be a great lover of Shakespeare to enjoy Shakespeare in the Park.

Just being on the lawn of America’s oldest public park on a perfect summer evening along with a few thousand of your friends should do the trick.

Commonwealth Shakespeare Company’s 21st annual free production on the Boston Common is the comedy “Love’s Labour’s Lost,” the Bard’s lighthearted look at love, and how it makes fools of us all.

The idealistic King of Navarre (Justin Blanchard) demands that his fellow lords and scholars — Berowne (Justin Bowen), Longaville (Dalton Davis) and Dumain (Nash Hightower) – join him in a pact to spend three years studying while abstaining from food, sleep and women. It’s a kind of Bizarro world, 180 degrees removed from the modern college student.

Berowne speaks up, and opines that the proposed rules and punishments are too strict to be practical.

The pact is immediately threatened with the arrival of the beautiful Princess of France (Jennifer Ellis) and three members of her court — Rosaline (Obehi Janice), Maria (Jes Bedwenik), and Katharine (Margaret Clark) — and their attendants, to attend to a dispute about the Acquitaine region.

The king has made their visit an exception to his rule, and the fall down a slippery slope begins with their arrival.

The men quickly find themselves enamored with the women, and petition the princess’ courier, Boyet (Brandon Whitehead), to reveal the names of the women they are smitten with.

The cast is uniformly fine, but the most spirited, sexually-charged verbal sparring is between Bowen’s Berowne and Janice’s Rosaline, while  Ellis’ Princess and Whitehead’s King also get in their shots in verbal duels.

CSC Artistic Director Steven Maler, who directed this production, and his company are not above Three Stooges-style slapstick such as a bit when the boys go batty after meeting the girls, something akin to the “Now are the foxes” skit that starred Steve Martin and Dan Aykroyd on “Saturday Night Live.”

The presence of Trinity Rep and Gamm Theatre mainstay Fred Sullivan Jr. is always a plus, and here he plays the haughty school master Holofenes, who is not above breaking into a bit of Curly breakdance  when the situation calls for it.

In an interview a few years ago, Maler said that when performing outside, actors’ gestures and movements have to be a little more pronounced because they’re playing to an audience in a vast area, instead of a closely-defined space. Because of that, it helps to have actors who have performed outside quite often and are also adept with Shakespeare’s comic roles.

Remo Airaldi is the lusty Spaniard Don Armado,who is in love with the country wench Jacquenetta (Rachel Belleman), who is also playing footsie with the fool Costard (Larry Coen), and it is always a treat when those two gifted comedic actors and frequent CSC contributors are onstage at the same time.

There are misplaced missives to create comic chaos and the women – as they are sometimes wont to do – toy with the affections of the men.

There’s also a play within a play – a technique Shakespeare will turn to again – called “The Nine Worthies” which is great fun.

“Love Labour’s Lost” isn’t The Bard’s most fully realized work, plot-wise, and doesn’t really wrap things up neatly, instead kind of fizzling out after a death in the princess’s family, after which she imposes her own “blackout” of sorts.

But it matters not, not when Maler directs with an eye towards making the mood of the piece as spritely and bright as the recent summer evening on which it was presented.

With the heat wave finally ending, the upcoming week looks to be a great time to update your love affair with live theater. Take your love along, and be reminded how it’s hard not to look ridiculous when love is in the air.