‘Crazy for You’: The Wards lead the way again 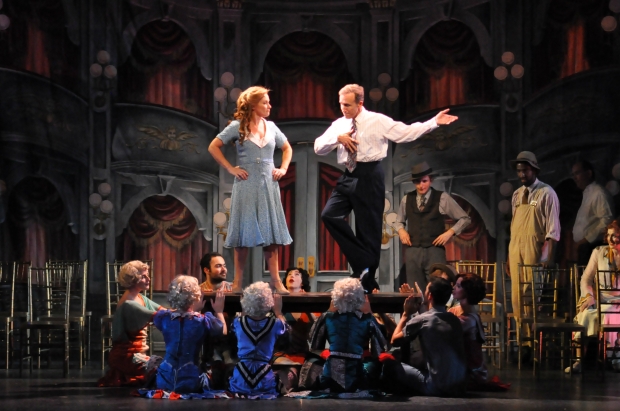 Kirby Ward as Bobby Child and Beverly Ward as Polly Baker (center) and ensemble in “Crazy For You.” Courtesy Reagle Music Theatre/©Herb Philpott

WALTHAM – Robert Eagle, the producing artistic director of the Reagle Music Theatre in Waltham, has formed many long-term relationships with actors, directors and designers during the 48 years he has been producing musicals.

Two of those relationships are with the husband and wife acting duo of Kirby and Beverly Ward, both Broadway veterans with credits from many of the finest theaters in the country.

The Wards have often found an artistic home at Reagle, where they have starred in such shows as “Singin’ in the Rain,”and “My One and Only,” and are at it again. starring in Reagle’s current production of “Crazy for You” at the Robinson Theatre through Sunday, August 14.

As a performer and a director, Kirby Ward offers great value, as the energy, experience and the professionalism he shows as a performer carry over to his role as director, setting a firm example for his troops to follow.

Not that Beverly Ward is any slouch herself. The way they move together smoothly and effortlessly in a dance number recalls the best that both film and stage have to offer; there’s no worries about chemistry here.

And the good news is that Kirby Ward hasn’t forgotten how to play Bobby Child, a part that earned him an Olivier Award nomination in the West End of London in 1993. While he may not exactly fit the part age-wise 23 years later, once you put that aside, the ability to act, sing and dance the role doesn’t appear to have changed to any great degree.

He’s a whirling dervish on stage, tap-dancing his way into your heart, with excellent comic timing and a winning stage presence honed over several decades in the business.

The book by Ken Ludwig for “Crazy for You” is no heavy lifting and funny enough, but it mainly serves as a coat-hanger on which to hang all those gorgeous Ira and George Gershwin tunes – “Someone to Watch Over Me,” “Embraceable You,” “I Got Rhythm,” and “They Can’t Take That Away From Me.”

Kirby Ward’s Bobby Child is a 1930’s playboy who just wants to sing and dance, and has a five-year-and-counting courtship going with finacee Irene (Aimee Doherty), who is at war with Bobby’s mother Lottie (Susan Scannell Gilbert), who wants Bobby to settle down at the bank – and not with Irene.

Bobby is sent by his mother to the forgotten-but-not-gone town of Dead Rock, Nevada to foreclose on a theater owned by the Baker family: Polly (Beverly Ward) and her father Everett (Mark Nichols).

It’s hate at first sight for Polly when she learns who Bobby is, so Bobby decides to change his identity in an effort to woo Polly. He becomes to Bela Zangler, the impresario and creator of Zangler’s Follies,a character based on the iconic Florenz Ziegfield.

The original choreography by Susan Stroman is faithfully – and spectacularly – restaged by former Rockette Eileen Grace, and the Rockette influence is undeniable in the bevy of specrtacular production numbers, including a long pink line of chorines kicking up a storm.

The good news is that the Wards and Eagle have backed themselves up with some fine local talent.

Doherty doesn’t get nearly ernough chances to stretch out those long legs in dance numbers, but here she gets her chance, and takes full advantage.

Matthew Zahnzinger has strung together several strong perofmrnaces locally and here he scores again as Bela Zangler, who pursues his true love Tess (Rachel Abbate) to Dead Rock, where she is helping Bobby stage a show that might just save the Bakers’ theater. That is, if anyone could find Dead Rock other than Fodor travel writers Eugene and Patricia (Chris Charron and Joy Clark in nice comic turns).

Zahnzinger’s Zangler gives him a chance to show off his comedic skills playing against “himself” in the number “What Causes That?” and he gleefully holds his own with Kirby Ward.

Eagle and Ward have decided not to reinvent the wheel when it comnes to some of the production values, employing the original scenic design by Robin Wagner and William Ivey Long’s original costumes.

The presence of such old pros as Kirbys at the top of the ticket lifts the entire company up – especially the younger performers still finding their way – and makes this a fine evening at the theater.

The best part is that both they and the rest of cast look as if they’re having a good time up there, and that can’t help but carry over into the audience. 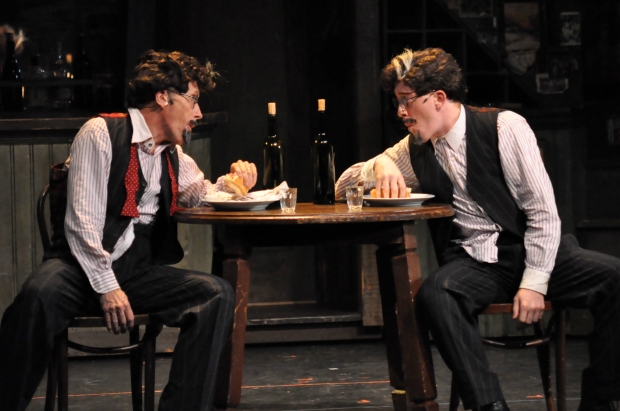 ← Company’s ‘Legally Blonde’ is light, frothy fun
Blue skies ahead for NSMT’s ‘Singin’ in the Rain’ →