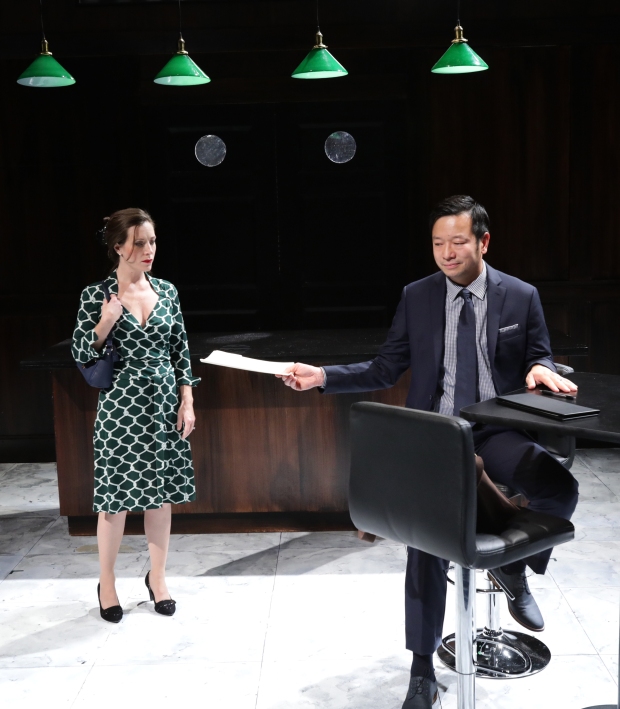 BOSTON – You probably don’t want to see how either sausage or legislation are made.

And, for that matter, you probably don’t want to see how political candidates are chosen, and how decisions are made that will decide someone’s political future

The Lyric Stage Company’s production of Kenneth Lin’s “Warrior Class” is a three-handed look at a rising politician’s unbridled ambition and the lengths he will go to – and others may, also – to see that ambition fulfilled.

Julius Weishan Lee (Michael Tow, Lyric’s “Chinglish”) is a man on the rise after his longshot bid to become a New York State Assemblyman strikes paydirt when the Democratic opponent’s campaign runs aground. As a candidate, he checks many boxes: he’s young, handsome, a Christian and former Marine with a Harvard Law Review credit.

Now the powers-to-be – including a GOP political operative named Nathan Berkshire (Steven Barkhimer) – are considering backing him as a candidate for a congressional seat.

It’s heady stuff, but first there’s the matter of something that needs to be scuubbed clean – incidents 20 years in ther past involving Julian and his former college girlfriend, Holly Lillian Eames (Jennifer Webb), since married.

It was a troubled relationship that ended badly when, according to Holly’s account, Julius stalked her, took photos of himself holding a gun and at one point threatened suicide.

When Nathan and Holly meet in a restaurant in Baltimore, Nathan informs Holly that her college has expunged any records of the incidents, and that the possibility of them going public is the sole roadblock to Julius’ political future.

The talk is cordial but when Nathan produces documents that will reduce the relationship to certain fixed terms, she balks. What will it take for her to agree?

Playwright Kenneth Lin has written for Netflix’s nonpareil political drama “House of Cards,” about a ruthless, scheming politician’s rise to the top, and and parlays that knowledge of backroom deals and political in-fighting to write dialogue that crackles with authenticity.

He has also chosen to insert his Asian-American ethnicity into the piece in a big way, not only with his lead character but also in dialogue involving suspicions and prejudices that may exists in voters’ minds over past incidents that featured Asian-Americans who “went off” in a deadly way,

And, if Holly’s account of the past incidents are true, is Julius still that person who is apt to go off, or was what happened simply a case of youthful indiscretion?

Each of the three combatants are dragging around their own baggage. Julius and his wife are strruggling after an aborted pregnancy and the thought they may not be able to have children.

Holly’s family is beset by financial woes and she has a husband who is a lawyer who hasn’t worked in a long time; she believes burying the past with Julian merits a job for her husband at one of several openings at a federal agency.

Steven Barkimer is superb as Nathan, a consulant, fixer, advisor, etc. Anything is possible, it seems, when he’s your friend, as long as he can use your influence and power and peddle you to those willing to pay him back in kind. But he is dragging around his own personal ball and chain in the form of a child with a drug problem.

When negotiations falter – as they did between he and Holly around Julius’s past – Nathan’s not above threatening to make a call that will put Holly’s husband in jeopardy, or recalling perhaps how a breakdown might have clouded Holly’s recollection of the incidents with Julius.

And while Julius sees a particular committee post in Albany suiting his ambitions and interests, Nathan pushes him back to the Racing and Wagering Committee, where he will be in position to help guide a lucrative contract to the right person.

“Warrior Class” is a continuous three-handed game of “What’s in it for me?” Everything is negotiable, of course, including Nathan’s continued political support for a candidate.

Director Dawn M. Simmons keeps the chess pieces moving quickly around the board at a brisk pace until a stark, sudden ending that may or may not be your cup of tea.

But watching three fine actors get to that point over a pressure-packed 80 minutes of an Advanced Placement course in Modern Politics 101 should be everyone’s cup of tea.

← MRT’s ‘Abigail/1702’: Ten years after The Trials
URT’s comedy ‘When January’ is sweet and upbeat →