Adams is a brave, powerful presence in Hub’s ‘Wit’ 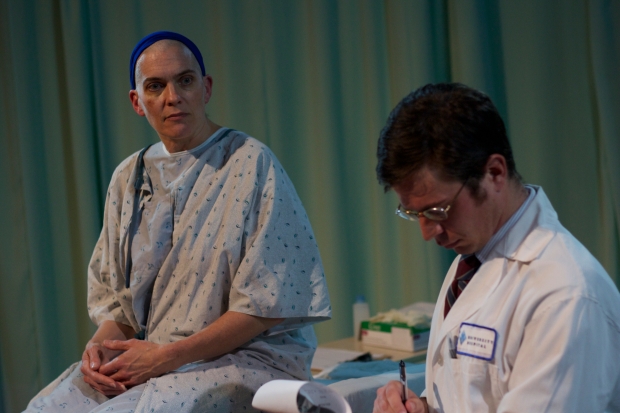 BOSTON – It is one of the better theatrical roles written for women in the last few decades, but it requires so much of those who attempt it that it isn’t often undertaken.

There’s no mailing in the part of Vivian Bearing, Ph.D., the character at the center of Margaret Edson’s “Wit,” now being performed by the Hub Theatre Company of Boston at the First Church in Boston through Nov. 19.

Playwright Margaret Edson won the 1999 Pulitzer Prize for her one-act play about a brilliant academic undergoing torturous treatment for terminal cancer. She wrote the first draft of the play in 1991, while working in a Washington, D.C. bike shop and, to date, has not written another play.

The actress who plays the part of Vivian has to be all in, given the range of emotions, the terror of the diagnosis, and the blunt portrayal of physical pain. It has to take its toll on the actress playing the role, especially in such things as her shaved head – there’s no faking that.

Liz Adams has authored a brave , powerful performance as Bearing, anchoring the production and setting a high bar for the other performers to clear.

“How are you feeling?” Vivian makes it clear early on about how she feels about the ubiquitous question, a question she often answers dripping with sarcasm as she undergoes the most intense – and painful – form of chemotherapy imaginable.

Robert Bonotto is Dr. Harvey Belekian, whom we meet first in very clinical terms as he drones on about the details and particulars of Bearing’s metastatic ovarian cancer, Stage IV; Vivian wryly notes “there is no Stage V.”

Dr. Jason Posner (Tim Hoover) is a former student of Vivian’s whose heart is in the right place – he is drawn to oncology because cancer is “awesome” and he wants to save lives — but he falls woefully short when it comes to relating to his patient; he’s more more interested in the clinical than the personal.

“Do you ever miss your patients after they’re gone?” Vivian pointedly asks him, flummoxing him.

Lauren Elias as Sue and Liz Adams as Vivian in “Wit.” Photo by Alex Aroyan.

Posner conducts a heartbreaking, ultimately demeaning interview when it becomes clear that she has sacrificed her personal life for her work and has precious few friends. She has never married or had children, and when asked if she is having sexual relations, she musters up as much dripping sarcasm as her ravaged body can muster and replies “not at the moment.”

Adams as Bearing shines brightly in the scenes when she is back in the classroom as an acclaimed professor, a scholar devoted to the works of 17th Century English poet John Donne, dissecting his Holy Sonnets word by word, the passion evident in her every breath.

There is a seminal moment in “Wit” when a powerful truith becomes evident to Vivian: After all the pain, she is more a research subject than a patient

Director John Geoffrion manages to get Adams to dig deep within herself to play a role that has to be so taxing both physically and psychologically.

The Hub Theatre Company is one of the more progressive theater troupes, making all performances “pay what you can,” removing virtually all barriers between the art and the consumer.

“Wit” was written more than a quarter-century ago and in that time cancer treatment and the treatment of terminally ill patients – including making it easier for them to make the decision to forego further treatment – have changed markedly.

Through her pain, Vivian Bearing cries out for humanity and dignity in her treatment. Her willingness to endure that pain to further research is her way of bearing witness for those who will follow her.