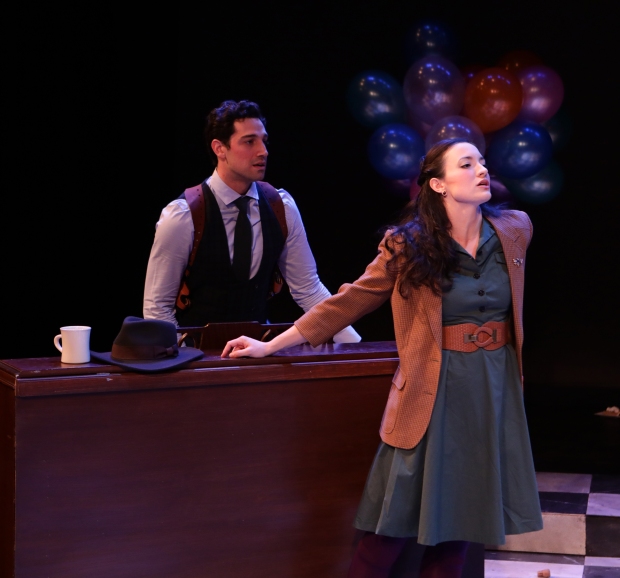 The Lyric Stage Company’s production of “Murder for Two” is a two-hander with a twist. Jared Troilo plays a detective investigating the crime, while the other actor – Kirsten Salpini – plays a whole boatload of suspects, including – get this – the surviving members of a boys’ choir.

This is a show that doesn’t take itself seriously – how could it – but is serious about making you laugh.

As if playing all the roles between them weren’t enough, Troilo and Salpini also take turns playing the score on the onstage piano, at times switching places in mid-song without missing a beat or a note. The two are one-stop shopping as performers.

Troilo is a cop named Marcus Moskowitz who dreams of becoming a detective, and suddenly finds himself at the center of a murder investigation in a rural New England mansion with a “real” detective an hour away.

Novelist Arthur Whitney has taken one right between the eyes just as he enters a surprise party, and the roomful of party-goers are all suspects.

Marcus, with his partner Lou’s permission, takes charge at the murder scene, fudging the fact that he isn’t actually a detective, even though he keeps a a badge handy for the time he will actually be one.

Salpini, meanwhile, meets herself coming and going as she changes characters with a swipe of a hand, using accents and changing the timbre of her voice to portray vastly divergent characters.

The book is by Joe Kinosian and Kellen Balir, while Kinosian contributed music and Blair the lyrics.

A stiff wind could pick up the book and take it away, but the songs are fun, the best of which are “Procotol Says,” an ode to the process Marcus hopes to use of finding the killer, and “He Needs a Partner,” performed by Marcus and Steph Whitney, Arthur Whitney’s criminologist niece who is not only a suspect but Marcus’ assistant in trying to solve the crime. As a relationship develops, she also could be something more. Both the music and book serve as showcases for the talents of the two principals.

Bookwriters Kinosian and Blair will have some fun by dropping in clues from time to time, as when we find that all of the suspects have been featured at one time or another  in one of Arthur Whitney’s books.

Salpini careens from character to character like a theatrical pinball, from the Southern belle Dahlia, Arthur’s wife, to the German psychotherapist Dr. Griff, to the French ballerina Barrette Lewis, and a feuding couple from Brooklyn named Murray and Barbara. Oh, yes, there are three young boys who survived a catastrophe that killed off nine members of their choir, and they are involved in a caper of a different sort.

Director A. Nora Long no doubt spent much of her time helping Salpini hone in on her characters and preventing them from bumping into each other while choreographer David Connolly coordinated the movement, which includes a funny production number, and also tried to keep the actors from banging into each other as they take turns at the piano.

Shelley Barish’s black, white and very red set splattered with blood reminds us at every turn that we are watching a murder mystery, albeit a much different one.

In the end, it doesn’t really matter whodunit. It’s pure fun watching Troilo and Salpini show off, especially when it looks as if they’re having just as much fun as the audience.