ART’s ‘Iguana’ may be next on the road to NYC 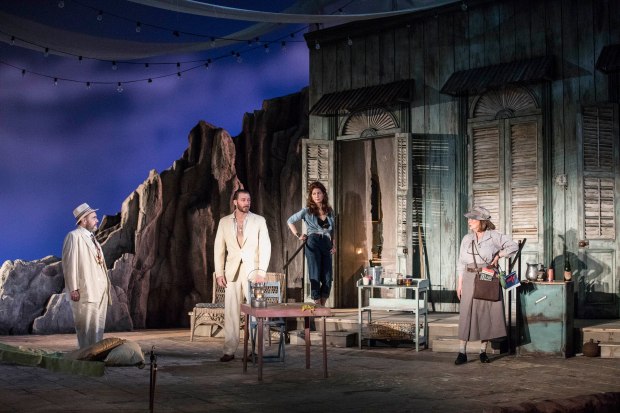 CAMBRIDGE – Director Michael Wilson is a passionate advocate of the works of Tennessee Williams. As artistic director of Hartford Stage, he produced a marathon of Williams’ works from 1998 to 2011 that included not only the major works but lesser-known one-act plays.

His 2001 Hartford Stage production of “The Glass Menagerie” starring Elizabeth Ashley as Amanda Wingfield was presented at the American Repertory Theater to critical acclaim.

Wilson and Williams have returned to the ART, marking the troupe’s second dalliance with the playwright after its own 2013 production of “The Glass Menagerie” that transferred to Broadway.

“The Night of The Iguana” marries Wilson’s passion with a cast able to carry out his vision, and the result is an “Iguana” that is a paean to the playwright and a theatrical triumph.

The threads of success when staging the work of Williams are woven through the relationship between Wilson and his cast, and Wilson’s past experience with this work in his 2003 production at Hartford stage.

He garners a superb performance from Amanda Plummer, a very good performance by Bill Heck, and benefits from a supporting cast of Tony-winners and Broadway-caliber production values.

It is 1940 and the collar of the Episcopal cleric around the neck of The Rev. T. Lawrence Shannon (Bill Heck) has been tightening for several years as he enters, bedraggled, agitated and sweating, the courtyard of the Costa Verde Hotel on the West Coast of Mexico owned by longtime friend Maxine Faulk (Dana Delany).

He is being vigorously pursued by a tour bus full of Texans from a Baptist school irate at the heat, Montezuma’s revenge, the hotels they’re staying in and the sights they aren’t seeing.

There’s also the backlash from him having taken up with an underage girl, Charlotte Goodall (Samantha Perkins), the charge of a fire-breathing Baptist college administrator named Judith Fellows (an excellent Elizabeth Ashley) who is bound and determined to wrest the ignition key for the bus from Shannon and then get him fired.

Depending on how you look at it, Shannon has not actually been “defrocked” but “locked out” of an earlier pastoral assignment after he took up with a Sunday school teacher and then scolded God from the pulpit. It was the beginning of a long downward spiral that took him from a plum job with Cook’s Tours to a third-rate gig with Blake Tours, which he is about to boot away.

Heck’s portrayal of Shannon gains steam as he goes along – the thunderstorm that ends the first act is a signal for him to pick it up – but this is Plummer’s show as the professional spinster from Nantucket who sketches to eke out enough to support her elderly father, a “minor poet” named Nonno (James Earl Jones).

The 97-year-old “oldest living and practicing poet” is bending and shaping what will be his final verses. He is often heard offstage, his “voice of God” melodic tones drifting in as if on a breeze.

I don’t think Williams quite had in mind Delany (“China Beach”) as Maxine Faulk, the earthy, lusty widow and the owner of Costa Verde. She isn’t as earthy and worn as other actresses who have played the part – actually, she’s rather perky and youthful – but she is sincere in her care and concern for Shannon, and the ever-present hope that he might jump off a tour bus and find a home with her. She employs two Mexican workers whose best work is apparently being done between the sheets.

Williams added a discordant note on the eve of World War II with a jaunty quartet of Germans who are always passing through while celebrating the Nazis’ exploits back home.

Plummer has worked with Wilson on three Williams productions, and the long two-hander in the second act as Hannah dissects Shannon’s past and his predilection for self-destruction is simply exquisite, especially the heartbreaking scene where she describes her “sexual experiences.”

Shannon’s “crack-up” is not quite a slam into a brick wall, more a sudden malaise that overtakes him.

The production values are simply superb. Derek McLane details the faded glory of the veranda of the Costa Verde hotel with elegant lights and louvered doors, while the lighting by David Lander offers sublime hues, especially during the gathering storm at the act of Act I.

The ART has become a conduit from Cambridge to Broadway and “Iguana” – if the reaction by theater-goers who are flocking to the Loeb Center is any indication – is another one coming down the road. 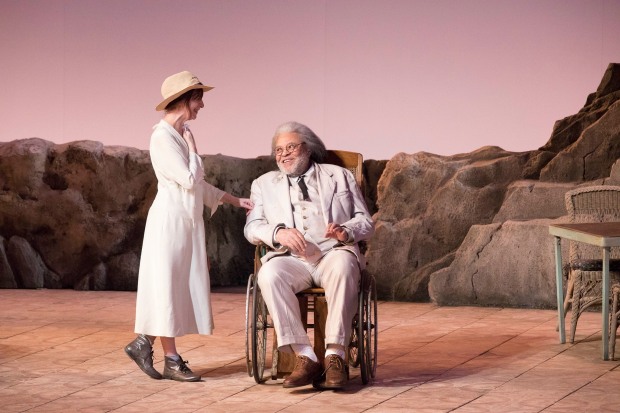 ← Musical fable ‘Jonah’ both entertains and uplifts
ASP’s ‘Edward II’: A page-turner of a production →