Akhtar scores again with ‘The Who & The What’ 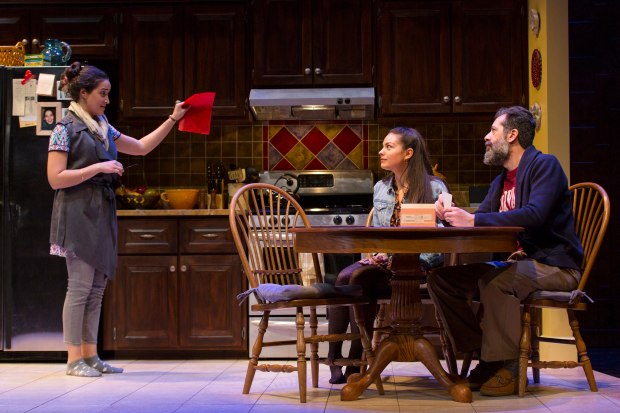 Aila Peck, Turna Mete, and Rom Barkhordar in the Huntington Theatre Company’s production of “The Who & the What.” Photo: T. Charles Erickson

BOSTON – A different angle, but still right on target.

In his Pulitzer Prize-winning “Disgraced,” a hit at the Huntington Theatre Company in January 2016, playwright Ayad Akhtar authors, through a dinner party gone terribly wrong, a provocative look at the Muslim-American as an outsider and his treatment in the Post-9/11 world.

Akhtar has returned to the Huntington, this time exploring the issues of gender, faith and family within the Muslim-American community in “The Who & The What.”  This time, a warm, winning, funny first act gives way to tension and conflict.

Ahktar has already shown he’s not afraid to step on some toes, even in his own community, and in this 2014 play he depicts a family whose views on Islam are not monolithic, with disparate points of view even when it comes to the interpretation of the Quran and even the depiction of the prophet himself.

As with “Disgraced,” “The Who & The What” has engendered controversy among some Muslims in its depiction of a Pakistani-American family living in Atlanta that is fractured by the writings of one of the daughters.

In a Boston Globe interview, Akhtar said a Chicago friend told him he was very moved by the play and its characters, but denounced him for what he saw as blasphemies in “a play that would have the theater burned down in a Muslim country.”

Controversy aside, there is nary a false note in the cast that brings Akhtar’s take to life. Early on Rom Barkhordar brings warmth in his role as the conservative father Afzal, still grieving the loss of his beloved wife to cancer as he turns his attention to the happiness of his daughters. He is protective and involved – to a fault, it turns out – in their lives, even as he continues to run his cab company that has made the family financially well off.

Turna Mete is younger daughter Mahwish, a nursing student in an arranged relationship/courtship with her boyfriend, a courtship that has found her “cutting corners” in attempt to stay true to her religion while also providing for his needs and desires. Still, she admits to her older sister Zarina (Aila Peck) she lusts after the hunky GRE instructor named Manuel.

Joseph Marrella and Aila Peck in the Huntington Theatre Company’s production of “The Who & the What.” © Photo: T. Charles Erickson.

Zarina is a Harvard grad with multiple degrees and, unlike her father and sister, her attitude towards Islam is more secular. She is still resentful that her father ordered her to end her relationship with a Catholic man who had agreed if they married that their children would be raised Muslim, but had not agreed to convert to Islam.

She had resisted her father’s entreaties to get back to the dating scene while her work on her book has slowed to a crawl, possibly both due to the failed relationship and a serious case of writer’s block.

Afzal, determined to see his older daughter married in the faith before settling the younger daughter’s situation, decides to create an on-line profile for Zarina on a Muslim dating site, casting a line to see what he “catches.” Into the net swims Joseph Marrella as Eli, a former Christian and a convert to Islam who is an imam at his own mosque and runs a soup kitchen .

Their meeting between Afzal and a stunned Eli at a coffee shop allows Akhtar to indulge his lighter side, as does the first date bwtween Eli and Zarina. Eli is earnest if a bit intimidated, first by the domineering father and then the brilliant daughter..

Later, after the two are married, Afzal will call for Eli to stop being “passive” in the marriage and to take charge of his spouse. “She won’t be happy until you break her,” he counsels.

That isn’t going to happen. Peck’s Zarina combines parental devotion with a healthy skepticism about Islam’s attitude towards women. She has kept the book that she has working on – “The Who & The What” — secret for good reason. It is an explosive novel about “gender poltiics” that aims to humanize the Prophet Muhammad while also exploring such issues as the origns of the hijab.

She also sees the Quran as perhaps a starting point for a conversation rather than the literal word of Allah.

Even Eli is worried about the reaction the book will bring.

When Afzal disovers the book during a visit by Eli, the faceoff begins. Afzal is convinced the work is blasphemy. And he tries to tries to convince his daughter of his dark view that this is a life – and perhaps death – issue if what Zarina has written comes to light.

“Are you so unhappy you don’t care what happens to you? You have to destroy this book,” he screams, labeling it “filthy pornography.”

Director M. Bevin Gara handles both the lightness of the first act and the dramatic change in tone of the second act with aplomb.

Cristina Todesco’s design sets the tone early with a box-like structure in the Islamic style of architecture juxtaposed onstage with an Apple laptop, signifying those about to step on stage have a foot in both the old and new worlds. She adds a beautifully realized slide-in kitchen, coffee shop, park bench, etc.

Saraswathi Jones’ original music strikes just the right tone while also echoing the tension that is steadily building over the course of the just less than two-hour production.

Akhtar was raised by Pakistani parents, both physicians, in a secular Muslin household in Wisconsin.  In the same Globe interview cited above, he said that if he had been born a girl his life would have been very different. He saw the pain suffered by his mother and sisters, and said the play is an attempt to “give shape to that pain.”

With “The Who & The What,” Akhtar educates, informs and entertains, and because he is fearless, that allows his characters to be fearless, too, leaving you remembering them well after leaving the Calderwood Pavilion of the BCA.

The Huntington Theatre Company production of Ayad Akhtar’s “The Who & The What.” Directed by M. Bevin O’Gara. Set design by Cristina Todesco. Costune design by Mary Lauve. Lighting design by Annie Wiegand. Sound design by M.L. Dogg. At the Caldwrwood Pavilion of the Boston Cebnter for the Arts through May 7. Huntingtontheatre.org.

← ‘The Illusionists’ aren’t your father’s magicians
‘Barnum’ is a funny, feisty look at an American icon →