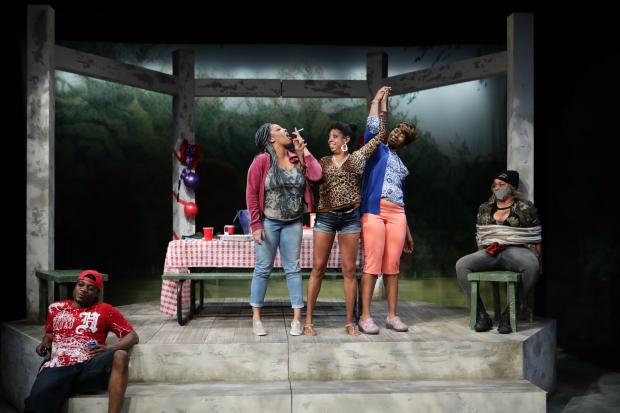 BOSTON – This time, The Lyric Stage Company of Boston doesn’t want you to sit back comfortably in your seat.

It starts when you walk into the theater for its current production of “Barbecue,” and instead of a program, theater-goers are given a flier and told they won’t receive a program until intermission, but that it will be “worth the wait.”

I did wheedle a program before the show, with the promise I would “act like an adult” and not open it. I didn’t, and “Barbecue” unfolded like no show I’ve ever seen.

Are you old enough to remember the old Wild Mouse ride at Paragon Park in Hull, its sudden twists and turns, dips and climbs, jerking you every which way until you arrive at the end feeling beat-up?

In a way, this show is like that and it’s a difficult show to review.

How much to reveal before you give away the whole store? I can’t remember a play that challenges both its audience and cast like this one, in which Playwright Robert O’Hara (“Bootycandy”) takes a very original idea and runs with it.

A spoiler alert: One of the biggest surprises in Act I will be given up here. The rest you’ll have to find out for your own.

In the picnic pavilion of a nameless public park in the middle of the country – I’m guessing by the accents more South than North — James T. O’Mallery (crackerjack character actor Bryan T. Donovan) is yelling into a cellphone at his sister Lillie Anne (Adrianne Krstansky) about a family barbecue about to happen at the park

The barbecue is actually a front for an intervention to be staged by the family in hopes of convincing sister Zippity Boom, aka Barbara O’Mallery (Deb Martin), a victim of both drugs and alcohol as well as public displays of psychotic behavior, to be carted off to Alaska for rehab, to a place with rope courses, yoga and horses.

J.T., Lillie Anne, a self-righteous sort who is quick to point out others’ flaws while standing above the fray, and sisters Adlean (Christine Power) and Marie (Sarah Elizabeth Bedard) are unconvinced Zippity Boom will agree to go quietly, so the barbecue/intervention has a bit of kidnapping element to it

As the grim details of each family member’s substance abuse are revealed, it becomes clear the O’Mallerys in general have put the “d” in dysfunctional.

When the lights dim and come up again, we’re still in that same picnic pavilion of the same public park, but this time the intervention is being staged by a black family, mirroring their white counterparts.

This time, James R. Milord is a Taser-toting James T., the self-righteous Lillie Anne is played by Jasmine Rush, Lyndsay Allan Cox is Adlean, Jackie Davis is Marie and Ramona Lisa Alexander is Barbara, aka Zippity Boom. There are changes in tone and style, with O’Hara generously sprinkling stereotypes through both casts that he will eventually turn on their head.

The constant is that in both cases, the members of the Mallory family are bedeviled by booze, drugs and gambling, some family members combining all three. The family used to number seven, but two have already been lost to drugs and booze, and family members seem determined to draw a line in the sand to try and help the member they believe is the worst of their lot.

O’Hara gleaned truths by watching intervention reality shows, where he found that such interventions seemed to be the stuff of middle class Americans and not its poorer classes.

The kind of family that might appeal to a larger, wealthier audience, say a white middle-class meth head instead of a poor black ‘ho smoking crack.

As the dual casts proceed towards the attempted intervention/abduction, O’Hara has a surprise at the end of Act I that will turn the tale on its head. And that’s when you’ll get your program.

Talented Director Summer L. Williams has her hands firmly on the controls of her dual casts, allowing them to move within their characters while also keeping the essence of each character intact.

Ther first act is all about the way the same circumstances in two families – one black, one white – can engrender very different feelings.

O’Hara has a lot of other things on his mind that will play themselves out in Act II, which slows a bit but is an equally bumpy ride, featuring interesting turns from both Barbaras, Alexander and Martin.

But that’s all you’re getting out of me. 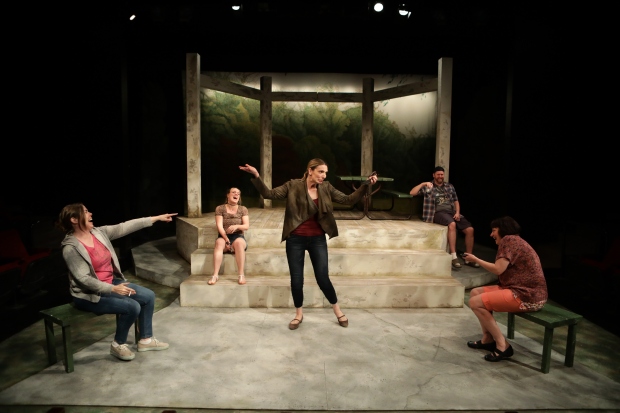 ← ‘Barnum’ is a funny, feisty look at an American icon
If you should see Spiro Veloudos, just say thanks →