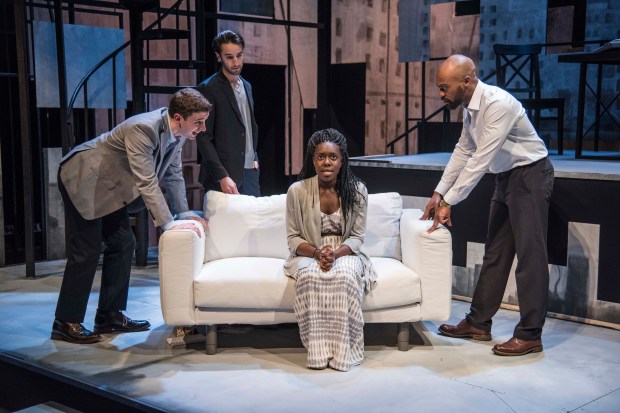 WATERTOWN – When playwright Lydia R. Diamond was writing “The Gift Horse,” she was still feeling her way as a playwright.

It was her first play produced at a regional theater – by the Goodman Theater in Chicago in 2002 – and a work she described as “somewhat autobiographical.”

In the current production by the New Repertory Theatre, “The Gift Horse” is described as a comedy but it could just as easily be a drama with some funny, witty bits.

Obehi Janice, a recent IRNE Award winner, delivers a fine performance as Ruth, an African-American teacher and artist with unresolved issues, whose long journey to find answers and a meaningful relationship has to overcome various obstacles, not only having to do with her personal experiences, but others having to do with race and gender.

This is Diamond before she was in full command of her considerable gifts, so evident in acclaimed local productions of “Stick Fly,” “Smart People,” “Voyeurs de Venus” and “Harriet Jacobs.”

As with her other shows, the characters in “The Gift Horse” are interesting and sharply drawn and the dialogue often crackles, but here the focus wanders at times and Diamond – through her characters – takes on a plethora of themes, not always satisfyingly addressing them.

Early on, we are introduced to Ernesto (Alejandro Simoes), who becomes Ruth’s a lifelong friend, a gay man whom she befriends at a time when they are both vulnerable. Ernesto’s story and his friendship with her becomes a parallel track to Ruth’s journey, as Ernesto becomes a psychologist whose yearning for companionship finally seems to be satisfied when he meets Bill (Lewis D. Wheeler), who’s almost too good to be true.

You guessed it – he is, and Ernesto shares his bumps and bruises with Ruth before rebounding in a chance encounter with Noah (Zachary Rice).

There is nary a role Maurice Emmauel Parent cannot slip easily into — in his last appearance at New Rep in “The Show Queen” he won an IRNE Award playing a seagull – and here he is Brian, Ruth’s psychologist, who gradually helps her confront her issues before eventually becoming her lover.

Through her characters, Diamond delves into the issues surrounding psychiatric treatment, the mores and morals of those in the profession, race, sex, and even the devastation wrought by the AIDS crisis.

Cloteal L. Horse is Jordan, who plays the cello and speaks directly to us, present on stage for much of the production but apart from the goings-on with Ruth, Brian, et al. Her presence is not explained for a long while, adding a layer ot mystery to the other events going on around her.

“The Gift Horse” goes back and forth in time, mixing eras with flashbacks from its starting point in the 1980s, which will be come especially relevant in the case of what happens to one of the major characters.

The second act seems to wander about and probably could have taken a haircut; in later plays, Diamond will get to where she wants to go in a less roundabout manner.

Amongst her many gifts, Diamond has a talent has writing characters with sharp, distinct edges, usually people whom you want to root for and befriend – with one obvious exception in this production – and that makes us more likely to overlook some of the flaws in “The Gift Horse.”

Even with those flaws, the young Diamond had a lot to say, and she said it well, and the result is a solid evening of theater that presaged her future success.

The New Repertory Theatre production of Lydia R. Diamond’s “The Gift Horse.” Directed by Jim Petosa. Scenic design by Jon Savage Costume design by Penny Pinette. Lighting design by Alberto Segarra. Sound design and composing by Dewey Dellay. At the Mosesian Center for the Arts through May 14. newrep.org.