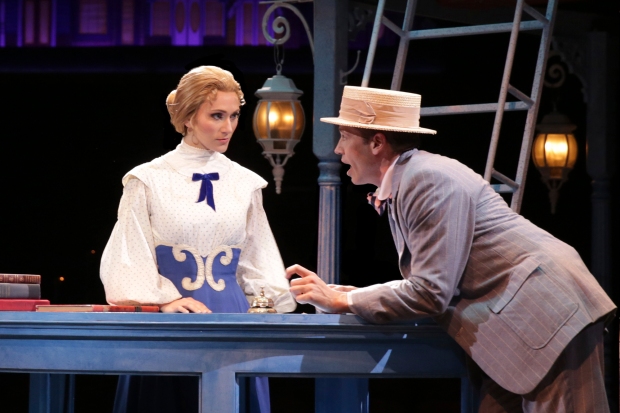 BEVERLY – On its way to becoming one of the most popular musicals in theatrical history, “The Music Man” – celebrating its 60th anniversary – had a lot to say.

Meredith Willson’s work is both a paean to small towns and small town values and a series of gentle jabs at the sort of characters you’ll find in any small Midwestern town such as River City, Iowa.

People such as River City’s Mayor Shinn (Brad Bellamy), a sputtering, beleaguered politician whose rantings and ravings usually end in a series of Norm Crosby-esue malapropisms.

In North Shore Music Theatre’s production now on stage through June 18, the delights are often found in the details underpinning the stars, such as an energetic ensemble and sparkling production numbers, and some fine supporting efforts that stretch all the way down to the smallest parts in the cast of 34.

NSMT’s Professor Harold Hill, Matt Loehr, was nominated for IRNE Awards in both of his previous appearances at the theater and he looks right at home in the role of the slick but slippery traveling salesman.

Hill is not always played by a great singer or dancer – see Robert Preston in the film version – but Loehr is the complete package, a sprightly athletic sort who easily handled the dancing demands of the theater’s 2006 “Singin in the Rain” and here exudes the requisite charm to both hornswoggle the townfolk out of their money via a marching band and eventually win the heart of a librarian named Marian Paroo (Siri Howard).

Willson packed a a lot of different kinds of songs into the score, and that’s what makes it such fun, starting with the rhythmic rolling of a railroad car in “Rock Island,” the rabble-rousing “Trouble,” to the uplifting march of “76 Trombones,” the melodic “Wells Fargo Wagon” and the inspired silliness of “Pickalittle” and “Shipoopi.”

“Till There was You” is a ballad so beautiful that the young Beatles were compelled to cover it in 1963’s “With the Beatles.” Both Howard and Loehr do it full justice, and Howard is luminous in “Goodnight, My Someone,” especially as she reprises it in Act II.

Ben Choi-Harris as young Winthrop Paroo does a nice job with the sing-songy “Gary, Indiana.”

Director Bob Richard and choreographer Diane Laurenson scored with a smart staging at NSMT last season of “West Side Story” and here the production numbers are performed with the same energy that marked last year’s show, most especially “Marian The Librarian” and “Trouble.”

Brian Padgett has done some fine work at the theater in the past and here he is Marcellus Washburn, Harold’s friend and a former con man who has “gone straight” but still agrees to help Harold.

And there is much fun to be had when Harold turns a feuding school board into a barbershop quartet (Matthew Chappell, Philip Bryan, J.D. Daw, Osborn Focht) singing in glorious four-part harmony such tunes as “Lida Rose” and “Goodnight Ladies.”

Two NSMT favorites also provide solid support. You can rely on Ellen Peterson, who projects the requisite heart and warmth and is a bit over the top — but delightfully so – as Marian’s very Irish mother, distraught her daughter is a “spinster” at 26 and determined that she grab the “last chance” brass ring being offered in the person of Professor Hill.

Cheryl McMahon – appearing in her 32ntd NSMT production – steals several scenes as Eulalie MacKecknie Shinn, the mayor’s wife, whom Hill inspires to leads a ladies classical dance ensemble that is to die for.

Salesman Charlie Cowell (Christopher DeAngelis) is hot on the trail of Hill because Hill’s schemes have “poisoned the well” for traveling salesman all around the Midwest.

The husband-wife team of director Richard and choreographer Laurenson stress the show’s many strong points, and pay attention to the little things.

And it’s the attention to detail — all those little things done right and coming together – that make this a fine production. 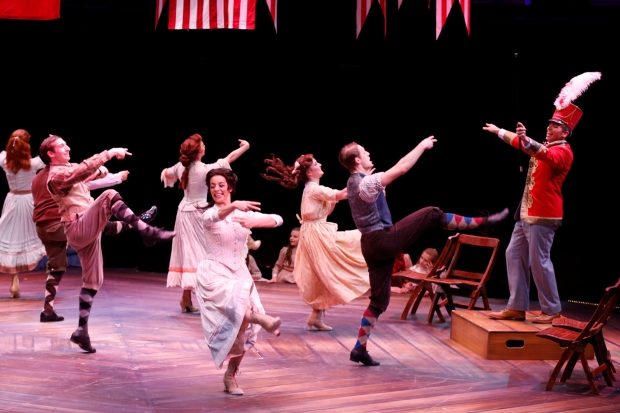 Matt Loehr (Harold Hill) and the cast of THE MUSIC MAN at North Shore Music Theatre thru June 18. Photo by Paul Lyden.