GSC’s ‘The Effect’: Is love real, or is it Memorex? 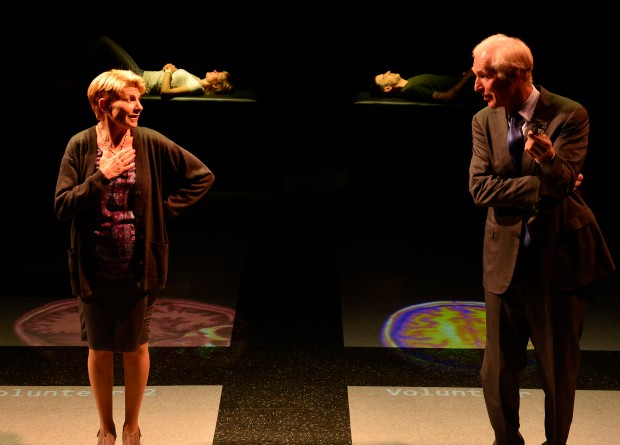 GLOUCESTER – Is that the alcohol talking, or do you really love me?

You only have to spend a short amount of time at the nearest dating bar to know that when drugs get involved with human interaction, things get very gray and cloudy.

In the Gloucester Stage Company’s New England premiere production of Lucy Prebble’s “The Effect,” is it the attraction between two people or a powerful new drug that are bringing a man and woman together?

This Cape Ann city is a nice place to be in the summer, and with Gloucester resident Lindsay Crouse, a veteran of several GSC productions on board, it was probably easier to bring in actor/director/writer Brad Hall and well-regarded director Sam Weisman.

Crouse’s annual outings on the GSC stage have become appointment theater, whether it’s as a member of a raucous ensemble in “The Norman Conquests,” as Emily Dickinson in “The Belle of Amherst,” as an off-beat tour guide in “Lettice and Lovage,” or the elegant Southern grande dame in “Driving Miss Daisy.”

She has helped elevate GSC’s profile in recent years, and what was once a sleepy little summer theater is doing some of the best work in the Greater Boston area.

Hall has been away from the stage for many years, but he’s never stopped acting and here he steps in and goes toe-to-toe with Crouse and is every bit as good.

A popular TV commercial years ago asked: “Is it real, or is it Memorex?,” referring to a recording tool whose manufacturers boasted its recordings couldn’t be discerned from the real thing. Here, we’re asked to decide whether the attraction between two of the participants in a clinical drug trial is organic or is the anti-depressant in question being taken responsible for their coming together?

The drug is designed to elevate the dopamine level, the neurotransmitter that helps control the brain’s reward and pleasure centers. The drug helps regulate emotional responses and may encourage risk-taking behavior in its subjects.

Susannah Hoffman and Mickey Solis are Connie Hall and Tristan Frey, two volunteers for the trial, who meet as they are about to begin four weeks more or less in isolation, without cell phones and contact with the outside world. Connie is a student in a committed relationship, while Tristan is an unfettered sort, eager to go whereever the tides and wind take him.

In interviews before entering the study, we learn about Connie’s admission of depression, and Tristan comes across as someone very open to the world of what drugs can do for him.

Crouse is Dr. Lorna James, overseeing the clinical trial for Dr. Toby Sealey (Hall). The two physicians have a past relationship that is complicated, and during the play it slowly reveals itself, peeling away like the layers of an onion.

And that relationship spills over into the clinical trial, and James’ conduct of the trial, leading to what Sealey expects of James and the hopes — and financial gains  — Sealey expects will be there at the end

Crouse as James is all business early on in adhering strictly to the study’s protocols, but as the drug begins to dramatically affect real human beings in real ways, she becomes less sure about her footing.

Sealey projects an air of outward surety and confidence, and a more forceful air when it appears things may need to be “adjusted” on the fly.

There is a lot on the line with the drug trial and as the dosage of the drug increases, so does the tension, especially as the Connie-Tristan relationship becomes more complicated and intense.

Prebble has some delicious plot twists coming your way in Act II, one concerning information Dr. James has and believes to be true and that she has passed onto the test subjects themselves.

Some very effective production values help ramp up the aforementioned tension, including projections by J. Michael Griggs that allow the audience to keep up with the progress of the trial and the increase in dosages. Claudio Ragazzi’s original musical compositions effectively integrate with David Remedios’ sound design.

Director Weisman has received honors for his stage, TV and film work and, armed with an experienced, talented quartet of actors and an interesting piece of theater, the result could be predicted: “The Effect” is a taut, engaging, suspenseful production, smartly acted and directed by a uniformly excellent cast.