This ‘Godot’ honors those actors who sit and wait 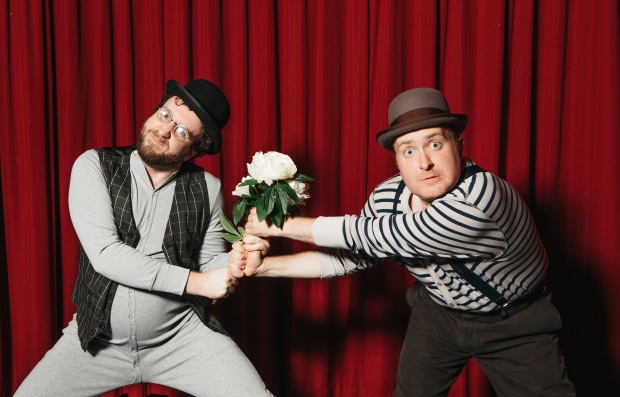 BOSTON – How best to satirize or parody a work of art ?

Well, in this case it’s be like Sam – aka Samuel Beckett, the author of “Waiting for Godot,” the 1953 play widely-regarded as an avant-garde masterpiece in which, as one critic described it, “nothing happens” and, because it is in two acts, “it is a play in which nothing happens twice.”

Playwright Dave Hanson was inspired enough to write “Waiting for Waiting for Godot,” a 90-minute piece about two understudies waiting to perform in “Godot.”

It’s being performed by the Hub Theatre Company through July 29 at Club Cafe on Columbus Avenue in Boston.

Understudies Ester and Val appear, in many ways, just like the characters in the play they are understudying – Estragon and Vladmir, respectively, in “Waiting for Godot.”

Just like the characters in the play, they are waiting, too, waiting to go in case of illness, accident or some other happy event, such as an actor being fired.

But in “Waiting for Godot,” the characters wait in vain for someone who never arrives, while there is at least some resolution for Ester and Val in Hanson’s play.

Both Ester and Val are also waiting for the big break, certain that any minute – or even later that day, because it’s still only the matinee – the director will arrive and tell them their time has come. That will make Val’s Aunt Mary, in attendance at every performance just in case, very happy.

You don’t actually have to have seen ”Waiting for Godot” to enjoy Hanson’s play. And while he is having some fun with Beckett, he is exploring the actual plight of the understudy, especially those who seemed doomed, such as Ester and Val, never to take the stage.

It’s just as well they aren’t going on — they seem to freeze when they try to recall the script.

Ester (Robert Orzalli) is the larger of the two actors, and someone who wants to be seen as so knowledgeable that he is keen to give the answer almost before the question is asked.

Grabriel Graetz as Val is more a follower than leader and often defers to Ester.

Both have their individual moments when they break out of their theatrical straight-jacket and breathe free.

For Val, it’s a full-length rendition of “There’s no Business :Like Show Business” that erupts out of the blue.

There’s a lengthy segment where Ester, proud of his own teaching skills, volunteers to tutor Val. He teaches Val the Miserly acting technique, which sees one actor simply repeating the other actor’s line over and over, which threatens to go on forever.

The outfits by Chelsea Kerl – complete with the bowler hats favored in many productions of “Godot” – are part of the fun, with Ester in long johns and a vest that just won’t fit no matter how hard he tries to squeeze into it, one of many occasions that allow Hanson to inject some vaudevillian comedy.

Lauren Elias, who wears many hats with the Hub including producing this show, is the Swiss Army Knife of actresses – plug her into a role and she’s ready to go. Here she is an assistant stage manaer who accuses the actors of having the easiest jobs in the theater – much easier than trying to run a show – and launches into a monologue to prove her point.

Then there’s an argument about the relative value of a theatrical education, something Ester rails against. “No one’s ever gone to Juilliard,” he says in one of his more salient moments.

Every so often, a wisp of dialogue wafts into the backstage area, lending an air of credence to the discussion going on backstage.

There’s a seminal moment when Val leaves backstage for the lobby to use the toilet there, where he meets an agent and just like that, the agent signs him to a contract on the spot.

Ester is irate that an inferior talent such as Val has an agent and he doesn’t.

Director Paula Plum has kept the pace brisk and helped the cast craft characters we can understand, appreciate for their quirks, root for and get behind, despite their oft-bumbling behavior.

By the way, when it comes to making live theater accessible, the IRNE Award-winning Hub troupe doesn’t just talk the talk, but it walks the walk. All performances are “Pay What You Can” but donations of all size are greatly appreciated.

“Waiting for Waiting for Godot” contains equal doses of heart and humor, both paying homage to Beckett and skewering him at the same time, while also crafting a love letter to those actors who only sit and wait.

The Hub Theatre Company of Boston production of “Waiting for Waiting for Godot.” Written by Dave Hanson. Directed by Paula Plum. At the Club Cafe, Columbus Avenue, Boston through July 29. hubtheatreboston.org.