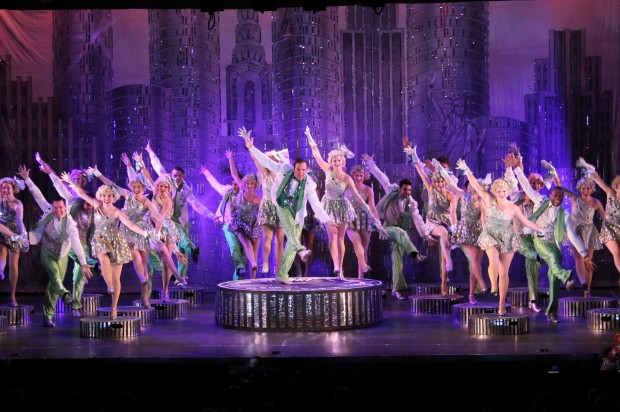 Instead of the “Blue Skies” that Irving Berlin described, storm clouds gathered in Waltham last week when Tom Wopat, who was set to co-star in the Reagle Music Theatre’s production of “42nd Street,” was arrested on Aug. 3 just before the musical was to open.

He entered a not guilty plea to two charges, but was removed from the show.

Incidents such as that can sink a show. Never fear. Director Eileen Grace and leadership at the top of the cast led by two real pros – the estimable Rachel York as Dorothy Brock and James Darrah as leading man Billy Lawlor – wasn’t about to let that happen.

So Rich Allegretto – who was scheduled to play Pat Denning, boyfriend of York’s Brock – slid into the role of the hard-edged director Julian Marsh, a role originated on Broadway by the late beloved Jerry Orbach, while Pat Reynolds took on the role of Denning on short notice. 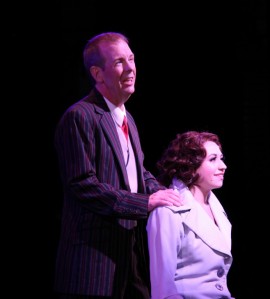 Just like the characters in “42nd Street” closing ranks around young Peggy Sawyer after an injury to their star, the Wopat incident seemed to bring the Reagle company closer together and they have responded with a production that had the audience leaping to their feet.

There is an iconic moment at the beginning of the show when the curtain is raised only to the point where dozens of pairs of feet are seen. Those pairs of feet break into a tap dance so energetic that the audience bursts into applause, and those opening moments are typical of the energy that courses throughout the Reagle production.

The production numbers, with Grace and Susan M. Cherbookjian co-choreographers, are something special, the best being “Go into Your Dance,” “We’re in the Money” (with the dancing dimes), and “Shuffle off to Buffalo.” The original choreography by Gower Champion and faithfully re-created by Grace and Cherbookjian requires both precision and attention to detail, and this show has both in spades.

It doesn’t stop there. As leading man Billy Lawlor, Darrah’s tenor is strong throughout and he handles the dance numbers with easy grace.

It only takes a few steps in tap shoes to ascertain that Mara Cecilia has what it takes to dance the role of Peggy Sawyer, the naive young actress from Allentown, Pa., who arrives in New York City in the middle of the Great Depression hoping to land a role in “Pretty Lady,” a new musical that director Julian Marsh hopes will put him back on top.

She stumbles her way into the chorus, but her talent is obvious. When star Brock goes down with an injury just before Opening Night on Broadway, Sawyer gets the call to replace her – and her performance will decide whether the show sinks or swims.

The supporting cast is just as fine, including Kate Scarlett Brunson, who shines as chorine “Anytime” Annie, and there is both great good humor from Reagle veterans Beth Martin Pierce as Maggie Jones and Harold “Jerry” Walker as performer Bert Barry.

There are few actresses who regularly grace area stages who are as talented and classy as Rachel York, and York once again proved herself as the haughty star who is challenged by starring in a show that is all about dancing – and she can’t dance.

York also has the kind of voice songwriters love to write for. And her class shone through when, during the curtain call, she graciously allowed Allegretto to come in last, a spot usually reserved for the biggest name in the show.

Allegretto handled the acting side of Marsh with aplomb and his gritty take on “42nd Street” was a bit strained at times, but I’m sure all was forgiven by both the audience and the company members.

After all that’s happened, this “42nd Street” is a tribute to the professionalism of all involved . For Allegretto, this show will be a memory he – along with Artistic Director Robert Eagle, director Grace, York, Darrah and the other members of the company – will cherish no matter where they go from here. 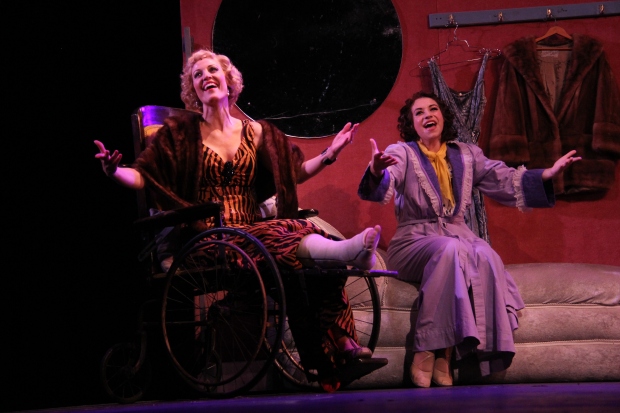 ← CSC’s ‘Romeo and Juliet’ is a tale for our times
‘Neverland’ is great fun, but score holds it back →