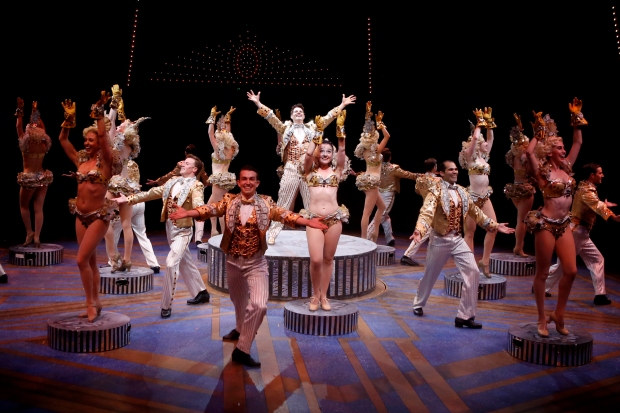 The company of “42nd Street” performs “We’re in the Money.” Photos©Paul Lyden

BEVERLY – In the opening moments of the musical “42nd Steet” at the North Shore Music Theatre, a curtain is slowly raised just enough so we can see many pairs of dancing feet, the rat-a-tat-tat of tap shoes ringing in our ears.

We hone in on those dancing feet and are frozen in a kind of theatrical trance. For the next two and a half hours, the dazzling dancing and fancy footwork rarely ever stops.

Much like “A Chorus Line,” “42nd Street” is a paean to the boys and girls in the line, the ensemble, the men and women who make those production numbers so spectacular. Here they are simply outstanding, and you can get tired just watching the dancers go through their paces, which include a couple of encore numbers after the final song is sung. They dance their hearts out and then some.

“42nd Street” is also a tribute to the great musicals and movies by people such as Flo Ziegfeld and Busby Berkeley, who originated the choreography for the film. Their musicals helped Americans escape from and get through The Great Depression.

One of the production numbers in this musical features female dancers forming geometric patterns, captured by cameras hung above the stage and highlighted on large TV monitors, the type of number Berkeley was famous for.

The story line concerns a young girl named Peggy Sawyer (Jessica Wockenfuss) who arrives on Broadway straight from Allentown Pa., determined to crack the chorus line of a Broadway show. She arrives too late to audition, but her arrival sets in motion a chain of events that will eventually make her a star.

As Maggie Jones and Bert Barry, the chief comic foils and the songwriters and producers for the show-within-a-show “Pretty Lady,” Tina Johnson and David Coffee are smooth as silk and show the younguns’ how it’s done in numbers such as “Keep Young and Beautiful” and “Shuffle Off To Buffalo.”

Tari Kelly is Dorothy Brock, the star of “Pretty Lady” who is, in a cast of dancers, is movement-challenged, but she remotely controls the purse strings for the show in the form of her “sugar daddy,” Abner Dillon (Erick Devine). Still, she’d rather be with longtime flame Pat Denning (Matthew J. Taylor).

In the role of Julian Marsh, the gruff, veteran director, a part originated on Broadway by the late, great Jerry Orbach, Burke Moses gets to utter some of the greatest – and OK, at times, corniest — lines in musical theater history as he preps Sawyer for her make-or-break moment in “Pretty Lady.” He begs her to come through, reminding that all of their jobs are on the line. “You’re going out a youngster, but you’ve got to come back a star.”

Standards in the Harry Warren-Al Dubin score include “Lullaby of Broadway,” “Broadway Baby,” the title tune and “About a Quarter to Nine.”

The production numbers are simply sublime and had the audience leaping to their feet; you’ll love “Go Into Your Dance” or the dancing dimes in “We’re in the Money,”

Director/Choreographer Kelli Barclay took the original choreography by Randy Skinner and skillfully adapted it to NSMT’s in-the-round setup, and the brisk pace promises another show-stopping number just around the corner.

So if you’re looking for pure escapism, or just a company of hoofers dancing their hearts out, “42nd Street” is where you should head.

The North Shore Music Theatre production of “42nd Street.” Music by Harry Warren and lyrics by Al Dubin. Book by Michael Stewart and Mark Bramble based on the novel by Bradford Ropes. Original direction and dances by Gower Champion. Original choreography by Randy Skinner. Direction and recreation and adaptation of choreography by Kelli Barclay. Music direction by Milton Granger. At the North Shore Music Theatre through Nov. 12. nsmt.org.

← ‘Souvenir’: A repeat very much worth watching
As a musical, ‘A Christmas Story’ shines anew →