Trinity Rep’s ‘Native Gardens’ gets down and dirty 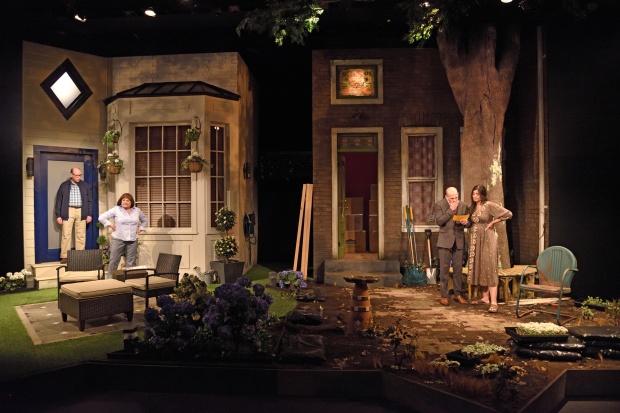 PROVIDENCE – For many amateur gardeners, their plot of earth is a refuge from the problems of the day, a stress reduction technique performed in the great outdoors.

But when things go awry, that same plot of earth can turn into a battleground.

In Karen Zacarias’s “Native Gardens,” now at the Trinity Repertory Company through May 6, gardening quickly becomes a metaphor for underlying issues that will be unearthed along the way as two couples’ battle for control of a small plot of land escalates into all-out war.

Sharply-written, well-drawn characters lob Zacarias’ verbal grenades at each other, making for a quite entertaining 90 minutes.

Pablo Del Valle and his pregnant wife Tania (Daniel Duque-Estrada and Maria Gabriela Rosado Gonzalez) are new to the Washington, D.C. neighborhood in their fixer-upper. Next-door neighbors Virginia and Frank Butley (Anne Scurria and Timothy Crowe) have been fixtures in the area for decades.

They all agree that the chain link fence separating their yards has got to go! A quick replacement with a stately wooden fence will arrive just in time to impress both Pablo’s bosses at his tony law firm and the judges viewing Frank’s elaborate English garden.

Frank’s goal is to win first prize in the Potomac Horticultural Society’s annual garden competition. But the devil is in the details. While installing the fence, the Del Valles discover that their land actually extends two more feet than they previously thought, right into the middle of Frank’s azaleas and hydrangeas.

What’s more, Tania is an environmentalist, against Frank’s pesticides, and all for planting native species, or as Frank refers to them, “weeds.” While he is saying toe-mah-toe, she most definitely is saying toe-may-toe, sneering at both his choice of plants and methods for maintaining them.

So the Butley’s expansive welcome with “dark chocolate and good wine” quickly turns frosty, especially when a work crew shows up to install the fence along the newly-discovered property line.

Zacarias’ pithy back-and-forths are in good hands as the combatants stick and move.

Crowe can convey much with the simple twitch of a mustache. Scurria, for my money, is always one of the best reasons to come to Trinity Rep. Duque-Estrada and Gonzalez give as good as they get, and the language begins to fall outside the bounds of political correctness, much to the delight of many theater-goers.

Attitudes are revealed .The Butleys are Republicans who thought about voting for Obama, but the playwright resists the urge to become preachy or to take one side against the other. Along the way, the two sides will splatter each other with mud, charging racism, sexism, ageism, and even narcissism.

Given the subject matter, set designer Danielle Al-Habieli’s set design had a lot to live up to, but it does the job beautifully, the flowers a tonic for the eyes of New Englanders near the end of an endless winter.

In most comedic farces, there is a point where events begin to spiral completely out of control, and threaten the believability factor the playwright has struggled to establish. But Zacarias does hold it together for the most part, though she is so far out on the limb late in the production the limb does threaten to break off and come crashing back to earth.

Director Christie Vela keeps the pacing brisk, the mood light, and never lets things get completely out of hand.

There is an event you may guess at before it happens that serves to bring the warring neighbors back together again, and it turns out poet Robert Frost is still right about good fences.

The Trinity Repertory Company production of Karen Zacarias’ “Native Gardens.” continues through May 6 at Trinity Rep, 201 Washington St., Providence. Tickets start at $25. For information and to purchase, call 401-351-4242. TrinityRep.com.