In Stoneham, the sisterhood disrobes for a cause 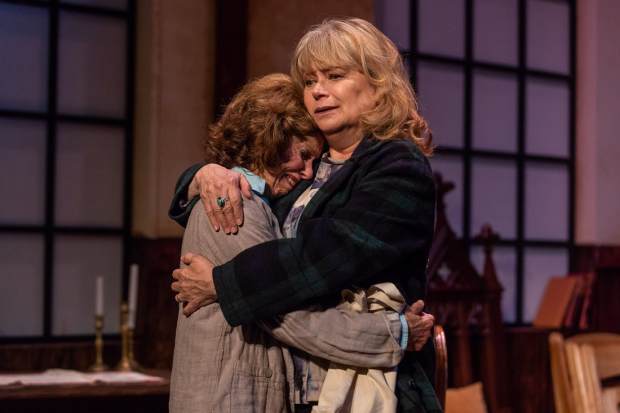 But the comedy “Calendar Girls, “ now at the Greater Boston Stage Company about a group of English women who produce a nude calendar to fight leukemia, is based on fact.

A group of women in Yorkshire, England, did indeed produce such a calendar in 1999 under the auspices of the Women’s Institutes, creating a worldwide sensation

The story was made into a screenplay by Juliette Towhidi and Tim Firth for a hit Miramax film and then adapted for the stage, and the current production in Stoneham is a delight, alternately hilarious and poignant.

“Calendar Girls” features many of the best and brightest female actresses who have graced local stages in recent decades, aided and abetted by some talented male interlopers.

The actual 1998 death of John Richard Baker in Yorkshire inspired the women who posed for the calendar to raise money in his memory. .At the time he fell ill, he had the habit of handing out sunflowers and pledging to return when they bloomed. He never had the chance but the sunflower theme permeates the stage play.

While the actresses in “Calendar Girls” have competed against each other for parts, they have also worked together many, many times, and that familiarity helps knit the piece together beautifully.

To a woman, they showed off their keen sense of comic timing, making things a bit easier for director Nancy E. Carroll, herself no stranger to a funny line delivered in a timely fashion.

As the play opens, John Clarke (Sean McGuirk) gives his wife Annie (Maureen Brennan) the news no one wants to hear. He is beloved by all of the members of the local Women’s Institute, and his death from leukemia is devastating.

But life goes on, and a decision has to be made when it comes to the group’s annual pictorial calendar, a major fund-raiser, and the old bridges theme has been decidedly under-performing.

In every group there is an alpha type, and here it’s Karen MacDonald as Chris – the role played by Helen Mirren in the movie — who leads the way on the nude calendar, even bringing the idea before the governing body of the WI to get its approval. MacDonald has played some pretty brassy characters in her day – Gov. Ann Richards of Texas comes to mind – and this is yet another.

Annie is supportive, as one of horticultural-loving John’s last statements had to do with plants being the most glorious in the latter stages of their life

But the reluctance of others is understandable, especially with the chance to run afoul of the upright chairwoman Marie (Cheryl McMahon).whose tastes run more to activities such as badminton or talks about vegetables by Lady Cravenshire, a pompous and clueless royal hilariously brought to life by the inimitable Stoneham native Kathy St. George. .

And many of the women had not only not revealed their whole self to the world, they hadn’t even done it for husbands or lovers.

Some of the relationships in the group are firm, others fractured. Kerry A. Dowling is shop owner Cora, a divorced mom and organist who takes the plunge, who knows her daughter will be mortified, but what the heck?

Retired teacher Jessie (the estimable Bobbie Steinbach) also signs on, and her posing scene is one of the comic highlights

Mary Potts Dennis is the comely Celia, who has lost her husband to the world of golf, and for her it’s a rite of passage – like the time she rode topless on a Harley.

For actress Sarah deLima, who plays the very reluctant but finally accommodating Ruth, the production and its themes had special meaning. She was treated and cared for as a leukemia patient at at Dana Farber Cancer Institute by a team that included her daughter Jane. She is in good health now and jumps into the fire in this show with both feet.

In the end, six of the women decided to take the plunge, in their natural habitat so to speak, doing such WI-approved activities as baking and knitting in the nude and using fruits, vegnetables and knitting materials as strategically-placed props

The nudity is carefully choreographed but the situation does raise the stakes for any possible wardrobe malfunction. In Saturday evening’s performance – fruits , vegetables and other props – all stayed in the right place.

It’s all done in good taste. Nael Nacer, a gifted comic actor himself, is a hoot as Lawrence, the ladies’ reluctant photographer trying his best to get a workable photo and preserve modesty at the same time. No one else does exasperation quite as well as Nacer.

And while the play is about the courage of a group of women who turn aside their inhibitions for a good cause, it is very much also above loss and loss. The calendar also becomes a source of conflict when Chris’ desire to wring as much money as they can from their efforts runs headlong into the feelings of Annie and what she believes John would have wanted.

The talented Jenna McFarland has reached deep into her bag of tricks and into the recesses of the Stoneham Theatre stage to create the Women’s Institute in the village of Knapely, Yorkshire, with a thousand small touches to make it feel just right.

Greater Boston Stage has partnered for this show with the Dana Farber to raise money for the fight against cancer, and at a recent performance Dana Farber was represented by Maryann Zschau, a well-known local actress.

These “Calendar Girls” will make you laugh long before you end up loving them and perhaps shed a tear. And don’t forget to drop something in the pot for Dana Farber on the way out the door, something that might someday help to save a loved one, or perhaps, you.

← Magic of ‘The Wiz’ is from from cast, designers
In ‘Fall,’ Miller’s birds do come home to roost →