WALTHAM – Some musicals age well and others don’t. Some musicals will still be performed 50 years from now while others will be neglected and forgotten

The musical, first presented on Broadway in 1975, had 12 Tony Award nominations, winning nine, and ran for 6,137 performances, becoming the longest-running production in Broadway history at the time.

“A Chorus Line” is based on the conception of the original director and choreographer, the late Michael Bennett, which morphed into the superb book by James Kirkwood and Nicholas Dante, with a timeless score by the late Marvin Hamlisch and the late Ed Kleban.

The story centers around auditions for the dance chorus unnamed Broadway show .The tension builds steadily as the original group of dancers is winnowed down to 17, and finally the eight who will get the parts.

Considered somewhat daring more than 40 years ago, it is now an example how far we’ve come in many areas. Still, there’s frank but often funny looks at sex, and it also deals with such issues in the dancers’ lives as isolation, depression, and molestation/rape.

The company encompasses the length and breadth of the dance community: straight, gay, black, white, brown, yellow, tall, short, they all meld and bond together in their shared passion over the two hours of the production, culminating in the iconic “One.”

The current production at Reagle Music Theatre of Greater Boston is a faithful replication of the show’s strongest elements and if the entire chorus line isn’t all always up to the standards set by the principals, there is much to like about the youth and enthusiasm. There were sound issues that hopefully cleared up soon after the opening night performance.

Veteran Boston TV anchor and actor Scott Wahle is Zach, the director heard much of the time as an offstage voice and whose past with Cassie (Kirsten McKinney) – formerly a featured dancer but now trying a comeback as a member of the chorus – provides the dramatic impetus.

Wahle is a capable performer and a Reagle mainstay and the part calls for a confident, authoritative voice and you can’t get much more authoritative than a former TV anchor; he’s a bit older than most Zachs, but he retains a winning stage presence.

At a recent performance the veteran Broadway performer Lauren Gemelli capably filled in for Aimee Doherty, who was excused from class to perform with the Boston Pops, as Sheila, the sexy veteran dancer aggressive who isn’t about to hide her light under a bushel.

Ansley Speares also has a nice turn as the sassy Val, who describes how she converted a former minus into a plus in “Dance Ten, Looks Three.”

The Reagle production benefits from the multi-talented Tavon Gamble as Richie, the cocky, athletic African-American dancer.

Again, not every dancer n the Reagle’s production is as accomplished as Gemelli, Gamble and McKinney. The cast includes many young performers, some still in college, some who just left, and like the character they’re portraying are still trying to get a foothold in their craft. Generally speaking, they make up in youth and enthusiasm any in their experience, and when they perform “I Really Need This Job “ their heart is really in it.

One by one, they shed their covers as Zack coaxes their personal stories out. And among the standouts in that process are Makai Hernandez as Paul and Victoria Byrd as Maggie.

The late composer Marvin Hamlisch, despite his many awards and the acclaim for this show, I believe was still underrated as a writer for the musical theater; for instance, his score for “Sweet Smell of Success” never got the appreciation it deserved,. even if it won a Tony for John Lithgow.

Here the team of Hamlisch and Kleban have contributed two songs to the Great American Songbook: “What I Did For Love,” and “One,” and several other numbers that would be the showstoppers of other shows: “At The Ballet,” “Hello Twelve, Hello Thirteen, Hello Love,” and “The Music and the Mirror,” McKinney’s long dance solo.

Sydney Parra as Diana Morales scores twice, first on “Nothing” and then aces the test on “What I Did For Love” and then there’s the breathtaking joy of “One,” the dancers resplendent in their gold lame tuxes designed by Theoni V. Aldredge; it still sends a chill down your spine.

Director Leslie Woodies gets the best from both Equity professionals and the up-and-coming young talent. She also recreated the original choreography by Bennett and Bob Avian.

In the Playbill listings, the show was dedicated by Bennett “to anyone who has ever danced in a chorus or marched in step … anywhere.”

I guess that includes even me, who was twice sent to “remedial dancing” to work on longer numbers in stage musicals.

The Reagle production is being performed as Bennett instructed, without an intermission, and checks in at just over two hours.

The original “A Chorus Line” remains the perfect marriage of director, choreographer, score and book.

Eagle and Co. are is presenting it as its creators intended, because it’s hard to improve on theatrical perfection. 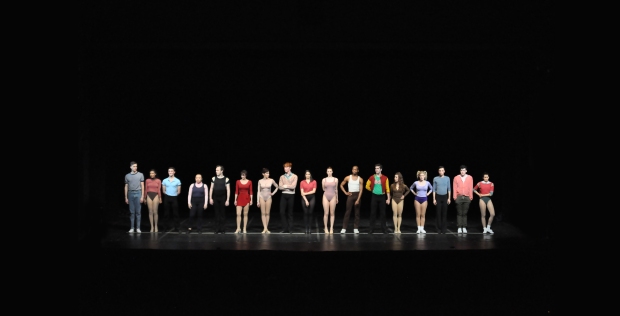 The ensemble performs “I Hope I Get It” from “A Chorus Line.” Photo credit: Herb Philpott.