BEVERLY – Many years ago, just before the first national tour of “Mamma Mia!” hit Boston in August of 2001, a press representative from Broadway in Boston was trying to explain to me at a press conference about a show.

“It takes place on a Greek island where a young girl invites three possible fathers to her wedding. There’s no original score. The. music is all by the Swedish pop group Abba. And it’s selling out every show in Toronto.”

I looked at her with blank eyes and thought theater-goers in Toronto had collectively lost their minds. 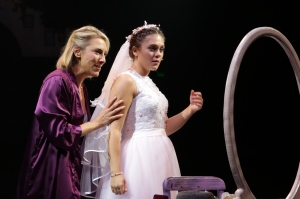 And then I saw it for the first of what is now several times and, somehow … it works. And many years later, it’s still selling tickets like crazy.

If you’re seeing “Mamma Mia!” again or for the first time, you won’t be disappointed now that the jukebox musical has finally arrived at the North Shore Music Theatre, where it occupies the slot held in the past by such other no-heavy-lifting musical comedies as “Spamalot” and Young Frankenstein.”

The run, which now ends Sept. 2,. has already been extended twice and a recent press performance was sold out.

The book by Catherine Johnson is from the “See Spot run” school of musical comedy, but she’s created a likable crew if characters and there’s enough humor provided along the way to make it all go down easy.

The story is set in the Greek isles where a 20-year-old girl named Sophie Sheridan (Malia Monk, Boston Conservatory grad) is scheduled to marry boyfriend Sky (Cameron Hobbs) in just a few months.

She would like to have the father she’s never met there, and finds in her mother’s diary notes about the three men her mother spent time with the summer before she was born.

There’s Sam ( David Elder), now a divorced father of two, whose fight with Donna ended up pushing her into the arms of two others: Bill Austin (Al Bundonis), a globetrotting travel writer who hasn’t put down roots anywhere and sees no reason to; and Harry (Christopher Carl), formerly known as the guitar-playing “Headbanger” but now a staid Londoner.

To Sophie’s surprise, they all say yes, and show up together at her mother’s taverna the day before the wedding, Chaos ensues.

Donna Sheridan (Erica Mansfield) is the single mom who owns the taverna on the island, with a constant struggle to keep things going and the bank manager at bay. Mansfield is a veteran of the part on Broadway and on tour and comfortably slips back into it for this run, and she’s more than up to the challenge on all fronts, including vocals that sizzle, especially in a searing rendition of “The Winner Takes it All.”

Elder as Sam is every bit her equal vocally in numbers such as “Our Last Summer.”

Also on the guest list for the wedding are two of Donna’s BFFs who serve as perfect comic foils: Rosie (Tiffani Barbour) and Tanya (Tari Kelly), two thirds of the former girl group Donna and the Dynamos, who reunite for the occasion. Rosie is averse to long relationships and Tanya is a three-time loser in the game of marriage, but neither will end up being lonely during the weekend.

The score – 22 numbers written by Abba’s Benny Andersson and Bjorn Ulvaeus – is so well-known and so infectious that music director Bob Bray could have conducted a show-long sing-along.

NSMT Artistic Director Kevin P. Hill, who choreographs and directs on the NSMT in-the-round stage, has parlayed his knowledge of the theater and his skills to once again stage some knockout production numbers. The ensemble is a group of sleek, sexy and athletic dancers, prancing around the stage hilariously at one point in snorkels and masks.

You are advised to stay put when the show seems to be ending …. because it isn’t. There’s more to come, and more colorful costumes and platform shoes.

“Mamma Mia!”has no message or hidden meaning. It’s not trying to say something other than: Fun to be had here.

It’s pure mindless summer entertainment, but entertaining it is, designed to take your mind off the fact that your air-conditioning bill for July just came in and it’s $500.

You’ll probably be up there happily gyrating with the rest of the Baby Boomers when the encore of “Dancing Queen” is performed.