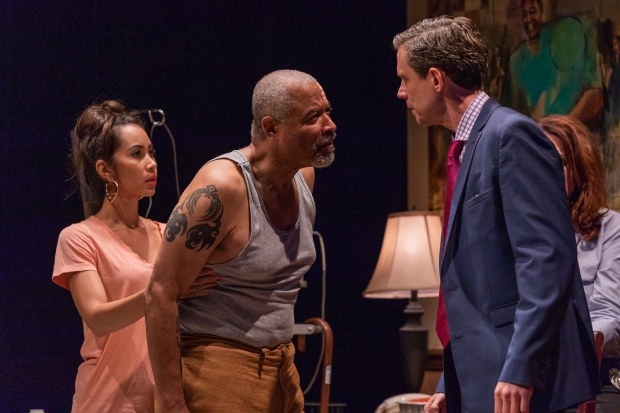 They often find themselves on the margins of society, forgotten or ignored, but through Giurgis’ skilled stagecraft they become compelling characters deserving of our attention.

The Speakeasy Stage Company is visiting the Giurgis canon for the third time with his 2015 winner of the Pulitzer Prize for Drama, “Between Riverside and Crazy.”

Director Tiffany Nichole Greene has assembled a terrific ensemble cast, but at its center the production is anchored by a standout performance by Tyrees Allen as Walter “Pops” Washington, the patriarch of the Washington clan and head of an extended, eclectic family.

Eight years after he was forced to retire after 30 years as a cop after being shot by a young white cop in an after-hour bar, Pops, a widower, has managed to stay afloat in a spacious, rent-controlled apartment in the stylish Upper West Side section of Manhattan.

Oswaldo is celebrating his hard-won sobriety at breakfast and is grateful to Pops for having put a roof over his head; he is on a mission to the Bronx to try and repair his tattered relationship with his father.

But after his wife’s death, foul winds are blowing that could force Pops to leave his home. The civil rights lawsuit he filed against he city continues to hang over him, with Pops determined not to “sell out” for anything less than the $5 million he believes he deserves.

Pops give free shelter to his son, Junior (Stewart Evan Smith), recently released from prison and now at City College; the son’s possibly pregnant girlfriend, Lulu (Octavia Chavez-Richmond), who calls herself a student but might have some experience playing for pay; and a recovering addict named Oswaldo (Alejandro Simones)

Junior also would like him to settle, believing it might give him a leg up as he tries to regain his feet.

Several of Giurgis’ other works also have strong comedic elements but this is very much a family drama, with conflict and interplay as Pops struggles to balance his own needs with those around him.

He is fatherly and gentle with both Lulu and Oswaldo, even when they disappoint and hurt him.

Simoes was terrific in Speakeasy’s 2012 production of Giurgis’ “The Mother****** with the Hat” and here he brings to Oswaldo a lost soul trying to find his way to sobriety, stepping forward tentatively only to be hurled violently backwards when his father rejects him…

There are tender moments, when it appears Pops will become a grandfather and Lulu sheds her tough outer shell to show vulnerability and a desire to be part of a real family and a real relationship.

Green also gets excellent supporting turns from Lewis D. Wheeler and Maureen Keiller as Lt. Caro and his fiancee, Detective O’Connor, Pops’ former partner, who pay a social visit to Pops to tell him they’re engaged and they’d like Pops to walk his former partner down the aisle.

The bonhomie at the beginning of the meeting quickly dissolves as the cops barely disguise their agenda: The officers have been sent by the city to get Pops to agree to settle the lawsuit with a non-disclosure agreement that will save the city administration any admission of fault or embarrassment.

Caro hints – more than hints – that the city will lean heavily on Junior and Oswaldo legally and see to it that Pops is evicted from his apartment if the answer is no.

Celeste Olivo has a bravura comic supporting turn as a sexy “Church Lady,” who is determined to prey on Pops but who during the course of events gets up close and personal with nearly fatal results.

Pops finds himself perilously close in the checkout line and he must decide if there is a deal that will allow him to find some justice – if not the $5 million he sought — and some peace and a chance to help his struggling family.

Set designer Eric D. Diaz mines every inch of the Roberts Studio Theatre and then some with an expansive living area and adjacent bedroom and even a third performing area, a rooftop area where characters can smoke the odd joint,and reflect on life

At some point, Pops, who has been knocked down and all but counted out, will have to make a choice, whether to stand on principle and find the respect he believes he has always been denied, or take advantage of a chance to help make the lives of his loved ones better.

His may be a different kind of family, but in this case Pops is Everyman, facing the kind of decision that families face every day.

The Speakeasy Stage Company production of “Between Riverside and Crazy.” Written by Stephen Adly Giurgis. Directed by Tiffany Nichole Greene. Scenic design by Eric D. Diaz. Costume design by A.W. Nadine Grant. Lighting design by Daisy Long. Sound design by Nathan Leigh. At the Calderwood Pavilion of the Boston Center for the Arts through Oct. 13. speakeasystage.com

← ‘Being Earnest’: Wilde’s great wit is always in style
‘Hamilton’: A story that belongs to all of us →