Praxis Stage’s ‘All My Sons’: The downside of a dream 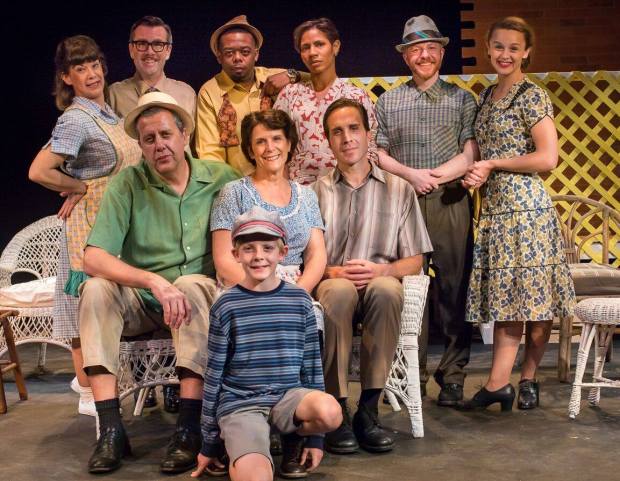 The cast of the Praxis Stage’production of Arthur Miller’s ALL MY SONS at the Chelsea Theatre Works.

CHELSEA – In his greatest works, the late Arthur Miller explored the downside of the American Dream and how it is exposed when, for his deeply flawed characters, the chickens come home to roost.

In doing so, he voiced universal, ageless truths, so the works are as fresh today as the day they opened on Broadway.

He set the play “All My Sons,” in the euphoria of the post-World War II era, when in a triumphant America it seemed all things were possible. But war, as we are reminded, leaves scars and those scars may reopen at any time.

Praxis Stage has crafted a powerful, compelling re-telling of the tale at Chelsea Theatre Works, led by its leading players but fleshed out with some fine supporting performances.

It is 1946 in an unnamed quiet Midwestern town. Daniel Boudreau is Joe Keller, the patriarch of the Keller clan, who has built a successful machine shop business over 40 years, enabling his family to afford upper-middle-class living that includes a maid.

But Joe is a wounded, empty soul. His firm manufactured airplane engine parts during World War II. When a large number of cylinder heads were defective, Joe still sold them to the Army Air Force, and the crashes of the P-40s they were installed in killed 21 pilots. But Joe has somehow beat the rap, leaving neighbor and business partner Steve Deever holding the bag and in prison.

As “All My Sons” opens, Joe’s son Chris (Casey Preston) has decided to propose to Ann Deever (Lorna Lowe), Steve’s daughter, who is visiting the Keller home. That shakes the foundations of the family because Ann was the girlfriend of Chris’s airman brother Larry, who was reported missing in action during the war.

Sharon Mason’s Kate Keller is a mother in denial, grasping at straws, including the astrology of Frank Lubey (Lucas Commons-Miller), a well-meaning neighbor who tells her Larry is alive.

She has come to terms with what Joe has done but believes in her heart Larry is alive, because essentially her life is over if he isn’t. And if Ann marries Chris, that means Larry is really dead and her life is meaningless.

Early in the first act she notes that a tree planted in his memory has fallen over.

“Everything that happened seems to be coming back,’’ Kate says, in this instance referring to Ann returning but in essence talking about the all of the problems of the family returning, all at once. The Kellers’ neighbors – the aforementioned Frank Lubey, his wife Lydia (Kayleigh Kane), Dr. Jim Bayliss (Scot Colford) and his wife Sue (Robin Abrahams) – are outwardly amiable but later openly disdainful of Joe and his family and the shame and stain they have brought to the community.

Preston has has a tough role as the conflicted son Chris; he started out a bit slow at a recent performance but soon was a force to be reckoned with. Working for his father – a man he once admired – he is in a job he hates, simply surviving and hoping to escape.

Chris was also in the war and led a battalion, most of whom never made it home,. And he carries that mantle of guilt around as part of his burden, along with being the “surviving son.”

As Ann, Lowe offers vulnerability and love for Chris, but a steely spine when it comes to confronting Kate.

There is also a strong turn by Dominic Carter as Ann’s brother George, enraged that his sister is even thinking of marrying Chris. He comes to call at the Keller home after visiting his father in prison, with a story to tell.

At a recent performance, the production sputtered a bit at the outset, as actors stepped on each others’ lines at times, normal when beginning a run and actors are still getting settled into their parts. But the cast warmed to the task, and got into sync shortly afterwards and remained focused from that point forward.

Director Joe Juknievich has smartly staged the piece, the pacing is brisk, and again, he has the cast rising to the occasion when it’s most needed, when Miller strips bare the outer shells of the characters, and teeth are bared.

Miller never makes it comfortable for the theater-goer. The final 15-20 minutes of “Sons” are about as intense as it gets on stage, and in the intimate Chelsea Theatre Works you can feel the full force pf the angry confrontations and the gut-wrenching revelations – especially when we find out how Larry died and why — until Boudreau as Joe finally admits the truth that he had buried deeply in his heart: “They were all my sons.”

The Praxis Stage production of Arthur Miller’s “All My Sons.” Directed by Joe Juknievich.  At the Chelsea Theatre Works, 189 Winnisimmet St., Chelsea, through Oct. 27. Praxistage.com.

← At Central Square, a ‘Frankenstein’ we never knew
A not-so-simple Simon portrayed in Gloucester →