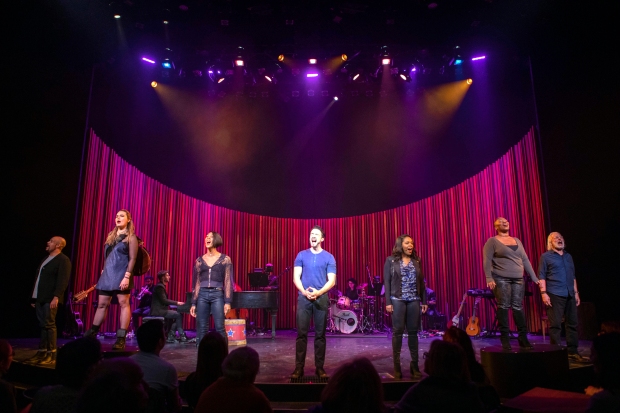 CAMBRIDGE – “ExtraOrdinary” presumably takes its name from a song in the musical “Pippin,” which the American Repertory Theater presented in 2012 and then transferred over to Broadway, where it won the 2013 Tony Award for Best Musical Revival.

But, in this case, ART Artistic Director Diane Paulus was also presumably referring to the length, breadth and quality of the musicals presented at the theater under her stewardship.

“EztraOrdinary” was conceived as a stand-alone production and it was never going to be a simple revue along the lines of “Side by Side by Sondheim” or the Kander-Ebb vehicle “And the World Goes ‘Round.”

By “casting the net wide,” Paulus identified 33 productions over the past 10 years that appeared either at the Loeb Drama Center or Club Oberon, the company’s second stage.

Paulus employed writer Dick Scanlan, who interviewed company members for vignettes that are sprinkled throughout, and there is also some original musical material marking the occasion.

At times the production often breaks down into group discussions, with company members dishing about their experiences with the ART, their favorite theatrical experience, or important moments in their lives.

There are also several production numbers where the cast hoofs it to Abbey O’Brien’s choreography.

Nothing wrong with that. But “ExtraOrdinary” does tend to wander off in different several different directions, and there doesn’t any one theme or thread holding it together.

While the song list at the official opening night performance had tunes from 13 ART productions, it tilted towards being “Pippin”-centric – that’s not a bad thing.

Two members of the company were also in the ART production of “Pippin” – Terence Mann and Matthew James Thomas – and a special guest performer on opening night was Patina Miller, who won a Tony for her role as the Leading Player in the Broadway production. Two of the brighter numbers from the score performed were “Corner of the Sky” and “On the Right Track.”

It was all appropriate, given that “Pippin” composer Stephen Schwartz was in the audience for opening night, as was Chet Walker, the winner of Drama Desk and Outer Critics Circle awards and nominated for a Tony for his choreography in “Pippin.”

One of the more effective numbers had the entire company’s voices laid over each other in the lovely ballad “Falling Slowly” from “Once,” which was workshopped at the ART before going on to win the Tony for Best Musical in 2012.

There was a lot of talent on stage, and some moments were simply sublime, such as Bryohna Marie Parham performing “Summertime” from “The Gershwins’ Porgy and Bess,” but there are also times when the performers appear to be fish out of water and uncomfortable in the production numbers, and the show slows to a crawl.

With all due respect to the estimable Mr. Scanlan, it would have been preferable to have less of his work and more of the best moments from the musicals.

With a plethora of material to choose from, Paulus dug deep for some of the numbers, including one from 2011’s “Prometheus Bound” at Club Oberon, which she conceived as a tribute to and fundraiser for Amnesty International.

One area that always shone brightly was the sprightly five-piece ensemble led by Lance Horne, who also wrote special orchestrations and arrangements. No matter what the type of song it was or from what show, they provided lively, en pointe accompaniment

Guest artists from ART musicals will also be appearing from time to time for the rest of the run through Nov. 30. Details are available at AmericanRepertoryTheater.org.

“ExtraOrdinary” has some fine moments from some great shows. If only there were more of those and fewer life-affirming stories..

← Hub’s ‘Peter and the Starcatcher’ shone brightly
‘Oliver!’: Many will buy ‘this wonderful feeling’ →