‘Bare stage’ puts the spotlight on a topical issue 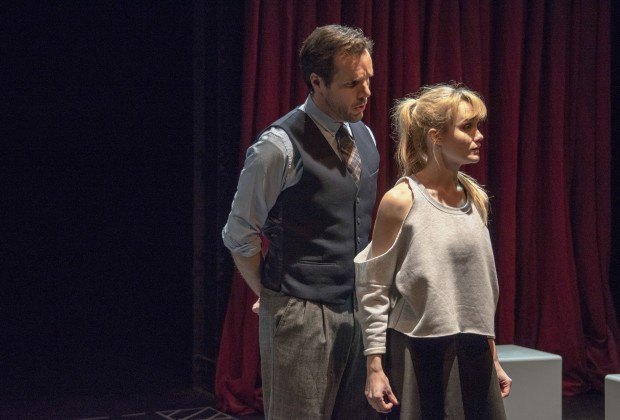 BOSTON – It’s one thing to write a play that is both topical and relevant.

But it’s another thing to address an issue in an evocative, thorough and entertaining manner.

Playwright Michael Walker, who lives “outside of Boston” and has done extensive work in the Worcester area, has done just that with “bare stage,” now being presented through March 2 at the Plaza Theatre at the Boston Center for the Arts.

The play is a tour de force for actress Ashley Risteen, who has succeeded in a wide variety of roles in recent years, and here she gives a brave, bold performance as an actress who must weigh her career goals against the question of whether she should have to shed her clothing to achieve those goals.

The issue of the handling of nude scenes came to the fore recently right here in Boston, where the second season of the Showtime series “SMILF” was being filmed.

Actress Samara Weaving and series creator Frankie Shaw, a Boston native, were at odds over what was reportedly Shaw’s request that Weaving perform a nude scene with only 40 minutes notice, despite the no-nudity clause in Weaving’s contract. There was also controversy about a sex scene Weaving performed with her on-screen boyfriend.

This issue is also often closely linked with the #metoo movement, because unnecessary or gratuitous use of nudity could easily be considered a form of harassment.

Risteen is Mary Catherine “Kate” Byrnes, an Irish Catholic lass who is a talented dancer and as aspiring actress, and she is auditioning for a new show written by the famed Parker Martin (Kevin Cirone).

Auditioning along with her is her best friend, Rachel Goldstein (Allie Meeks-Carufel) who is offered a non-Equity position in the chorus, much to Kate’s delight.

It’s only after both Kate and Rachel win a part in the chorus that they are asked whether they have a problem with being nude on stage.

That allows Kate and Rachel to examine playwright’s possible motives and their own feelings about performing in the nude. Both are game, but the self-deprecating Rachel asks whether she and “the girls” (her breasts) will be the object of laughter when she is dancing in the nude.

That opens up a whole new avenue about the issue of body-shaming.

When Martin changes course and decides only Kate will be nude, that poses many more questions for Kate, her father, and Glen Moore as Kate’s boyfriend Tim. Tim is a high school teacher who has just been given the chance to teach at Indiana University, and is eager to have Kate accompany him out there. If she goes, her chance to be part of an important work goes with it.

Steve Auger is a bit over the top as retired fireman Patrick “Paddy” Byrnes, Kate’s Da, but indeed I have met many such men who left the Ould Sod but the Ould Sod never left them, and the brogue is just as strong as it was when they left Ireland.

He is a cribbage partner to his daughter and a close friend. Putting aside any morality issues, he wonders how having his daughter dancing naked on a stage in front of 500 people will play at the firehouse. The scenes between he and Risteen ring true.

As well-known playwright/director Parker Martin, Cirone .cuts a dashing figure with a fine English accent, someone whose motives are called into question when nudity and then again when the nude scenes become the sole province of the lovely Kate. When Kate begins at to waver about her decision to perform nude, Martin exerts more pressure. Walker is asking if there is a true balance of power between a director and actor in such a situation.

The theatrical device of staging a “show within a show” should be used with great caution. The program notes that the action of the play is taking place on the bare stage of a professional theater company. It really doesn’t add anything to the production and instead just seems a bit confusing.

The question will be posed, as it has perhaps been posed in every such show : Is the nudity artistically necessary or an effort to exploit Kate and sell a ton of tickets, and possibly win a trip to Broadway?

The Festival Theatre Company, in association with Paul Gregory and Alex Kenton, has put together a top-notch team to stage the play, with A. Nora Long directing and choreography by Ilyse Robbins

In the program director Long and Risteen, who has a brief nude scene in the show, shared their thoughts on onstage nudity and how it can change the relationship between the actor and the audience.

Risteen has also done nude figure-modeling, and compared the difference between that and onstage nudity. “Here, the the audience and actor enter the age-old compact of of actor asking for trust, and audience asking fro something true. And our resulting collaborative [painting is an intangible one, but as complex and unrepeatable as brush strokes.”

There is a lot to like about “bare stage.” It tackles a difficult subject and does it well, with some fine performances and a sublime one in the lead role.

The Festival Theatre Company, in association with Paul Gregory and Alex Kenton, presentation of “bare stage.” Written by Michael Walker. Directed by A. Nora Long. Choreography by Ilyse Robbins. At the Plaza Theatre at the Boston Center for the Arts through March 2. No one under 16 will be admitted with an accompanying adult 21 and over. General admission tickets available at https://www.bostontheatrescene.com/season/bare-stage