Speakeasy’s ‘Once’ is awash with small pleasures 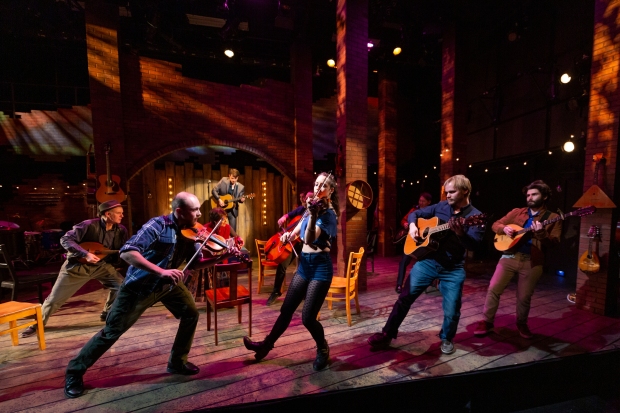 BOSTON – Even Broadway, the home of such blockbusters as “Phantom of the Opera” and “Les Miserables,” occasional succumbs to the charms of a smaller, more intimate work, with the accent on characters, emotions and situations.

So while “Once” arrived on the Broadway scene without a great deal of hype, given its humble beginnings as a Oscar-winning micro-budget 2007 movie written and directed by John Carney, it became a blockbuster.

“Once” was nominated for 11 Tony Awards in 2012, winning eight, including Best Musical.

This new production by the Speakeasy Stage Company in the Calderwood Pavilion of the Boston Center for the Arts through April 7 is awash with small pleasures.

It is one of the more romantic theater pieces in recent memory, be it straight play or musical, although it is not a conventional love story. It is a bittersweet melding of two wounded souls, and perhaps that’s a big part of its attraction.

It is the story of Dublin resident Guy (Nile Scott Hawver) , a street musician and songwriter by choice and by night and a vacuum repairman most of the time, working with his widowed father (Billy Meleady) in a shop below their apartment.

Into his life walks a Czech immigrant (Mackenzie Lesser-Roy), a piano player (who doesn’t own a piano) who loves music – and especially Guy’s emotional and raw music, much of which has to do with his mourning the end of his relationship with a woman who has since moved to New York.

Over the space of just five days,, their friendship and musical partnership will become something deeper – a complicated love story with several angles and distractions, including The Girl’s family situation, which includes a daughter, a husband not currently in the picture, several Czech expatriates, and a mother named Babuska. The spirited Czech mother/grandmother is played by the inimitable Kathy St. George, the queen of all comic supporting roles.

And while Guy and The Girl are actors/musicians, so are the entire ensemble cast. Everyone has a musical responsibility and most of the cast have several, allowing for a spirited violin duel or a stirring blend of ,multiple guitars and mandolins.

Chris Coffey has some very funny moments as an over-caffeinated, enthusiastic Czech performer named Svec, who takes his turn on guitar, mandolin, banjo, drum set and percussion and at one point channels his inner rock god.

As Billy, the hot-tempered owner of the music shop whose help and cooperation is vital to Guy’s dreams of musical success, Billy Butler basks in the glow of his assignation with one of The Girl’s Czech friends (Marta Rymer) that helps grease the skids towards the recording session Guy desperately wants.

Jeff Song has a nice turn as the bank manager who also helps Guy along, but also imagines himself a world-class musician and whose presence – a Cork native, mind you — draws the ire of Billy and threatens the studio sessions. Jacob Brandt is also fun as Andrej, the Czech fast-food worker who dreams of moving into management.

The score by Glen Hansard and Marketa Irglova is a stirring collection of tunes, including the Oscar-winning song “Falling Slowly,” which has carried over from the film, and “Gold,” another lovely ballad, and the voices are lovely from the top down.

A special mention to the choreography of Ilyse Robbins, who has to coordinate the movements of actors toting their instruments with music director Steven Ladd Jones, who wants certain instruments in certain locations for certain numbers.

Speakeasy General Manager Paul Melone makes a welcome return to the director’s chair, and he has fashioned a piece that takes all the things are good about the show and enhances them.

Because the love between Guy and The Girl is so bittersweet and fleeting, “Once” is a very different kind of love story.

By its conclusion, a lovely reprise of “Falling Slowly,” you, the theater-goer, will have enjoyed many small pleasures.

The Speakeasy Stage Company production of “Once.” Book and lyrics by Glen Hansard and Marketa Irglova. Book by Enda Walsh. Based on the motion picture written and directed by John Carney. Directed by Paul Melone. Choreography by Ilyse Robbins. Music direction by Steven Ladd Jones. Scenic design by Eric Levenson. Costume design by Rachel Padula-Shufelt. Lighting design by Karen Perlow. Sound design by Andrew Duncan Will. At the Calderwood Pavilion of the Boston Center for the Arts through April 7. speakeasystage.com