‘Kinky Boots’ is a musical with heart and sole

BOSTON – “Kinky Boots” may be a musical sending a message, but the message is wrapped so lovingly in a bouncy pop-rock score, high-energy choreography and a winning, funny book that the audience easily accepts and embraces what the show is selling.

The national touring production of “Kinky Boots” through Sunday at the Emerson Colonial Theatre runs along the path of “Billy Elliot” in getting involved with working-class folk, this time in Northampton, England and the shoemaking firm of Price & Son.

The production won six Tony wards in 2013 and ran for six years on Broadway, buoyed by Cyndi Lauper’s Tony Award-winning score and a warm, funny book by Harvey Fierstein.

Price & Son has been ravaged by imports and changing tastes, but Mr. Price (Geoff Davin) is hopeful son Charlie (Connor Allston) will take over the reins when it’s time and keep the longtime plant workers gainfully employed.

When the plant is running full tilt, it can be “The Most Beautiful Thing in the World,” as one of Lauper’s Tony-winning songs is titled, and a proud father tells his son: Someday all this will be yours. There’s just one problem: Charlie Price doesn’t want any part of it, envisioning a life in the bright lights of London with his girlfriend Nicola (Ashley North). 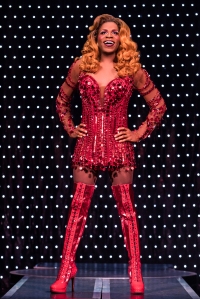 But his father’s death forces Charlie back home, where he is immediately confronted with reality. Stock has been piling up and there are no buyers in sight, and only a miracle can keep the plant open.

When he comes to the aid of what he thinks is a woman being assaulted by several men, he finds it isn’t actually a woman, but a drag queen named Lola (Kenneth Mosley) .

Part of his on-stage dress code are  sexy hip-high boots, worn by him and his fellow dancers, who are looking for something better and more spectacular.

Charlie sees a niche he believes his firm can exploit; the story is based on an actual British shoe-making firm in the 1990s that started making boots for women that were also worn by men.

In this case, Charlie hires Lola as a designer for the new product, but the reaction to his arrival on the scene at the factory is mixed when he arrives in full drag regalia. Even when Lola tries to fit in with “business class” attire, things are strained.

Similar ground has been trod in the past when it comes to working-class English folk confronting something they don’t really understand in “Billy Elliot, The Musical” where economically-strapped English coal miners are aghast at Billy’s decision to take up ballet.

The difficult relationships they had with their fathers growing up bonds Charlie and Lola (nee Simon) and makes for a touching “Not My Father’s Son.”

Lola is not your average drag queen. He is a trained boxer and the son of a boxer, who later disowned him. He travels with a group of six dancing “Angels,” all men who are passing – some spectacularly so — as women.

“I make a roomful of people feel normal by comparison.” Lola says at one point.

James Fairchild as beefy factory worker Don is the most resistant to accepting Lola as part of the crew, but a boxing match in which Lola lets Don escape with his dignity intact, Lola gets his respect. Meanwhile, Charllie’s relationship with Nicola frays as he becomes more involved with Lauren (Karis Gallant).

“Kinky Boots” was only a modest success as a 2005 film but benefits here from the stage adaptation by Fierstein, who has written some of the better books of musicals in recent years (“Hairspray,” etc.). Fierstein’s book uses humor in extolling the virtues of being what you want to be, and finding the true road to acceptance and happiness. He also espouses tolerance and an acceptance of differences,

Lauper’s score has all the rock sensibilities you’d expect, and is strong even when things get softer as during Lola’s second-act showstopper, “Hold Me in Your Heart.”

Lauper also rocks out in some rousing production numbers, including the “Raise You Up/Just Be” finale that raises the roof of the newly-restored Emerson Colonial Theatre.

Director and Choreographer Jerry Mitchell decides early on what works and decides to keep giving us more of it, with DB Bonds recreating Mitchell’s direction and Rusty Mowery his original choreography..

“Kinky Boots” still has the power to raise you up, thanks to the combination of Fierstein’s humor and heart and Lauper’s bouncy melodies, which still send the audience out onto Boylston Street on a high note.

The national touring production of “Kinky Boots.” Book by Harvey Fierstein, music and lyrics by Cyndi Lauper. Based on the Miramax motion picture “Kinky Boots.” Directed and choreographed by Jerry Mitchell. At the Emerson Colonial Theatre, Boylston Street, through May 12. BroadwayinBoston.com.