BOSTON – It is finally summertime and, as George Gershwin wrote, the living is easy.

And theater companies that had been staging heavy-handed dramas such as — I don’t know, say “Hamlet” — quickly change their tone to lighter works.

In the case of the Titanic Theatre Company, they have managed to combine the light and heavy and the result is great fun.

Paul Rudnick’s “I Love Hamlet” is not only  a paean to The Bard, his lovely use of the language, his  iconic character and those who attempt the Mt. Everest of roles,  it is also a tribute to all those who trod the boards “for the love of the game.”

To fully enjoy the fast, funny “I Hate Hamlet,” you have to listen closely to Rudnick’s throwaway one-liners and bon mots that are a large part of what makes it such a fun piece.

The members of the troupe, under the skilled direction of Fran Weinberg, is all in on the idea, and while some are a tad more effective than others, the end result is enjoyable.

As Andrew Rally, the recently-cancelled TV star who decides on a whim to audition for the role of Hamlet, to be performed in Central Park as part of the annual Shakespeare in the Park series, David Josef Hansen finds himself horrified to learn he has actually won the part and has a mere six weeks to master perhaps the most iconic role in the English language.

Thanks to the efforts of a hyper-enthusiastic real estate agent named Felicia Dantine (Megan Ward), he finds himself ensconced in the very same New York City apartment where the legendary actor John Barrymore (Andrew Mullin) once lived.

That pleases his German-born agent, Lillian Troy (Shelley Brown), who has a history with both the apartment and its former occupant.

Andrew’s decision to play Hamlet is greeted warmly by his 29-year-old  girlfriend. Deidre McDavey (Shalyn Grow), who imagines herself Ophelia to Andrew’s Hamlet, but who is also “saving herself” for the right time, place and man, much to Andrew’s frustration. She manages to master the balance of being virginal with unbridled passion admirably.

A séance led by Felicia fails to materialize Barrymore, but – under the be careful what you wish for – the great man is soon to make his entrance from the afterlife, but can only be seen by Andrew and a few others, setting up comic possibilities. 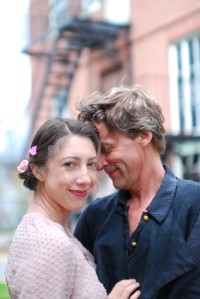 Matt Arnold has shown well in other works with roles that required an outsized personality, and the role of Gary Peter Lefkowitz is another in that vein. He shines in the role of a cocksure TV producer who saw Andrew through his first series as a surgeon and has returned with the possibility of untold riches if Andrew abandons his infatuation with the stage to return to Los Angeles. Arnold has also contributed some well-designed fight choreography as Andrew and Barrymore engage in a stirring duel.

As Barrymore, Mullin manages to strike a balance between his darker qualities – his alcoholism, his endless womanizing – and the charm and sex appeal it took to become a leading man on the stage and in Hollywood.

He’s also able to portray his heartfelt appreciation for the torment the role is puting Andrew through.

As the real estate agent who is over the top in every way, Ward is fine but I couldn’t quite place her accent, while Brown has some nice moments with Mullin as she recalls her youthful fling.

Anytime a director both respects and has affection the material – and it is evident from her  attention to detail that is the case with Weisberg – the result is usually an enjoyable evening at the theater.

The production values are also strong, especially the use of incidental music such as the use of the much-loved “Brush up Your Shakespeare” from “Kiss Me Kate,” and the complicated sound effects that went off with a hitch on a recent opening night

Costume designer Erica Desautels has done a skilled job outfitting the players, although I would lose the Greek fraternity baseball cap Gary wears.

At the nexus of this “Hamlet” is the moment when Andrew describes a seminal moment onstage in the park when he begins Hamlet’s famous monologue, and he catches the eye of a young theater-goer and describes the feeling.

“Hamlet has changed you,” Barrymore tells Andrew. “Altered your course.”

Andrew will have to make a life-changing decision of some sort, but getting to that point is a fun trip. It’s summertime and the living is easy, so put your mind at rest, even if you also hate “Hamlet.”