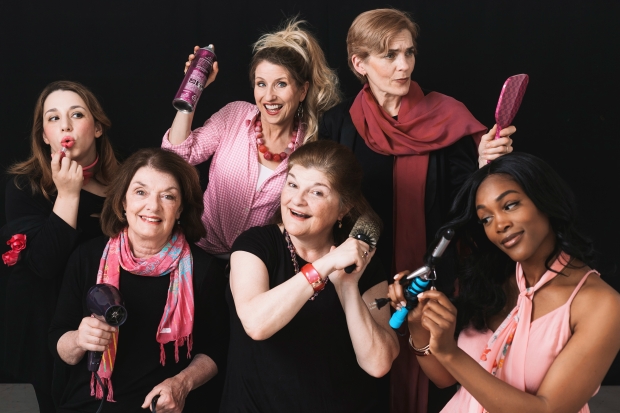 BOSTON – The Sisterhood of the Blow Drier has never been better.

Robert Harlan’s 1987 play ”Steel Magnolias” is a true ensemble piece , the actresses working together in the Hub Theatre Company of Boston production like a well-oiled machine, and the warmth the group projects from the intimate stage in Club Café on Columbus Avenue radiates out into the audience, enveloping them.

It’s no surprise that the show is directed by the redoubtable award-winning actress/director Paula Plum, whose ongoing relationship with comedies spans decades and a mountain of achievements both performing and directing the genre.

Recently, that includes a critically-acclaimed performance in Gloucester Stage Company’s “Barefoot in the Park” and directing such diverse pieces as Gloucester’s manic comedy “Out of Sterno”, coaxing bravura performances from Jennifer Ellis and Amanda Collins, and Actors’ Shakespeare Project’s “School for Scandal.”

And while the entire ensemble is formidable, two of the women stand out: Maureen Adduci as the perpetually crotchety and unhappy Ouiser Boudreaux and Jane Kfoury as wealthy widower Clarece Belcher.

It is 1985 in Chinpaquin Parish in Northern Louisiana, and Truvy’s Beauty Shop (Motto: “There is no such thing as a natural beauty”) is buzzing with activity on a Saturday, with owner Truvy Jones (Catherine Lee Christie)  tending to members of a wedding scheduled for that afternoon, as well as breaking in a new employee named  Annelle Dupuy-Desoto (Lauren Elias), a mysterious, nervous young woman who may or may not be married, depending on when you ask.

Plum cast a woman of color – Oye Ehikhamhen – in one of the key roles as 25-year-old Shelby Eatenton-Latcherie, who as the play opens is preparing to get married that afternoon to an up-and-coming young lawyer. In a poignant note in the program, Plum writes that laws in Louisiana and other Southern states that were not overturned until 1967 would have made it extremely difficult for a mixed-race family to exist in Louisiana during that time period, but that she chose to cast Ehikhamhen as “the ideal Shelby” for the production.

Ehikhamhen is luminous as the bride to be, and courageous and determined when she confronts what her diabetes might mean about her ability to have a much-wanted child, despite her fiancée’s that adoption would be fine, too. She is pretty in pink – pretty much her only color.

The accomplished actress Liz Adams has toughest road to hoe as M’Lynn  Enteneon, asked to age up considerably to play Shelby’s mother, dealing with a rambunctious husband who as the play opens is shooting up the neighborhood to prevent birds from disturbing the celebration, instead choosing to disturb the entire neighborhood. She combines wisdom with love in dealing with Shelby’s difficult decision to get pregnant.

The women’s relationships color the piece and give it much of its humor during the span of more than two years the play covers. Truvy’s husband hasn’t gotten up off the couch the couch in 15 years; Ouiser has had two unhappy marriages, which she discusses in her dry, sardonic sense of humor.

Everyone and everything is fair game when the ladies train their weapons on each other or some other unsuspecting member of the parish.

Clarece, once married to the local mayor, is still in love with the local championship football team and with giving a good knock. “Ouiser, you sound almost chipper. What happened today – did you run over a small child or something?”

And she voices the philosophy of all the ladies. “My mother once said to me, Clarece, if you haven’t got anything good to say about someone, then come sit down by me.”

You’ll cheer as Annelle, a good-hearted sort searching for her place in life, finds her sweet spot in life as a born-again Christian with a real-life husband. Ouiser, of course, is sympathetic. “I just can’t get enough about your spiritual growth.”

And while you’re laughing, at some point you’ll be laughing through your tears, as life takes an unpredictable downward turn – as it is wont to do.

But still you’ll be glad you made the journey with these wonderful characters, who support and uplift each other through thick and thin,

Set designer Cassie Chapados has fashioned a workable hair salon complete with accessories on the cozy Club Cafe stage, as well as posters of 80’s hair icons, and costume designer Chelsea Kerl has done a fine job matching costumes to characters, including the form-fitting clothing favored by the voluptuous Trudy.

A reminder: The Hub Theatre Company of Boston is the only theater company in the area that is “Pay What You Can” for all performances.

So book an appointment for Truvy’s this week while you still can, and get ready to both laugh and cry