J.T. Turner as GEORGES and James Darrah as ALBIN perform “With You On My Arm” © Herb Philpott Photo

WALTHAM – It was the kind of couple – and the kind of family– not typically seen on Broadway stages when it debuted back in 1983,

The musical “La Cage aux Folles” had a storied three-month tryout at the Colonial Theatre in Boston in 1983 with George Hearn and Gene Barry in the title roles of Georges and Albin, and latex, when it debuted on Broadway. it was a huge hit. It has since become one of the Great American Musicals, with several musical numbers safely ensconced in the Great American Songbook.

The brilliance of composer Jerry Herman had long since been realized before he took on the story about a nightclub in St. Tropez known for its drag performances, where a longtime headliner named Zaza aka/Albin (James Darrah) presides.

Zaza/Albin lives in the apartment   that adjoins the club with Georges (J.T. Turner), who runs the nightclub and is Albin’s longtime partner.

The Reagle Music Theatre of Greater Boston’s current production of “La Cage aux Folles” is a sparkling success, bringing down the curtain on its 51st summer season with a show that expertly balances rousing production numbers with sublime love ballads.

The musical is based on the play by Jean Poiret, with a book by the estimable four-time Tony winner Harvey Fierstein. The play also spawned the 196 film  that starred Nathan Lane and the late Robin Williams. 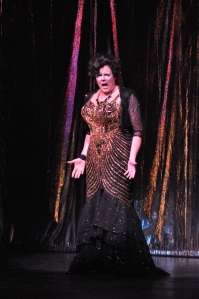 “La Cage” was the first Broadway musical that starred a gay couple n the lead roles and the first to feature a kiss on stage between two men. The producers and original director Arthur Laurents were terrified at how the audience might react but he show’s themes of love and tolerance trumped all concerns then and for all time.

Director/choreographer Susan M. Chebookjian has authored some memorable productions at Reagle, winning one IRNE and nominated for two others for her choreography, and she is on her game again here, aided by assistant Daniel Forrest Sullivan.

This production is a homecoming for Darrah, who is a product of performing arts programs in the Waltham schools and first performed for Robert J. Eagle and Reagle Theatre 50 years ago. As Albin, he is always the sensitive, insecure diva, craving respect for his talent but also craving the love and support of his longtime partner Georges.

The multi-talented J.T. Turner as Georges certainly has performed in musicals before – memorable turns as Moonface Martin in “Anything Goes” at Reagle and Alfred Doolittle in “My Fair Lady” at Lyric Stage come to mind – but I would be hard-pressed to remember the last time he was asked to carry a show in a lead role. And while his voice may not be his greatest strength, he gracefully puts over Herman’s songs.

It is Herman’s most romantic and heartfelt score. The longing and sweet “Song on the Sand” and the poignant “Look Over There” are both beautiful ballads. Then there’s the show-stopping anthem “I Am What I Am” and the joyous “The Best of Times.”

Georges and Albin have together raised Georges’ handsome son, Jean-Michel (Christopher Acorn), the product of Georges’ relationship with a beautiful showgirl who left the boy’s life at a young age.

Jean-Michel has returned home with the news that he is to marry Anne (Lily Steven). There is just one problem: Anne’s parents are coming for an overnight visit and the father, Dindon, is a notoriously intolerant right-wing politician. It’s a big of a thankless one-note role, but seasoned pro Rich Allegretto, who stepped in and rescued “42nd Street” a few seasons ago, handles it with aplomb and his wife Marie is performed by Maureen Brennan, who shows once again her masterful sense of comic timing and one of the best set of pipes in Greater Boston.

Hilarity and drama ensue when Georges and Jean-Michel try to put Albin back in the closet for one night. When the decision is made to include Albin as a fictitious “Uncle Albert,” they give Albin crash lessons on the proper way to talk and walk.

And where would “La Cage” be without the talented and energetic octet of dancers called Les Cagelles, made-up and costumed within an inch of their lives and channeling their inner Harvey Fierstein in some spectacular production numbers. For the record, they are: Will Burke, Joseph Cullinane, Andy Edelman, Justin Flores, Christopher Mitchell, Dwayne P. Mitchell, Michael Mornley and Paul Watt-Morse.

Ellen Peterson has some very fine work at local theaters for quite some time now – including 20 appearances at Reagle — and here she shines yet again as Jacqueline, a restaurant owner and longtime friend of Albin who helps Dindon get his comeuppance.

Fierstein wrote the character of Jacob, the cross-dressing maid/butler as a scene-stealer, and newcomer Benz Atthakarupan complies as the flamboyant servant who is always finagling to find a spot in a number at La Cage.

Special mention to music director Dan Rodriguez for performing Herman’s spirited score with verve from the first notes of the overture to the reprise of “The Best of Times.”

Thanks to the talents of its principals, a strong supporting cast and Chebookjian, Reagle’s “La Cage” is awash with laughter, heart, and that which makes the world go ‘round: Love. A winning description for a winning night at the theater.

Les Cagelles perform “We Are What We Are” in “La Cage aux Folles.” (C) Herb Philpott Photo