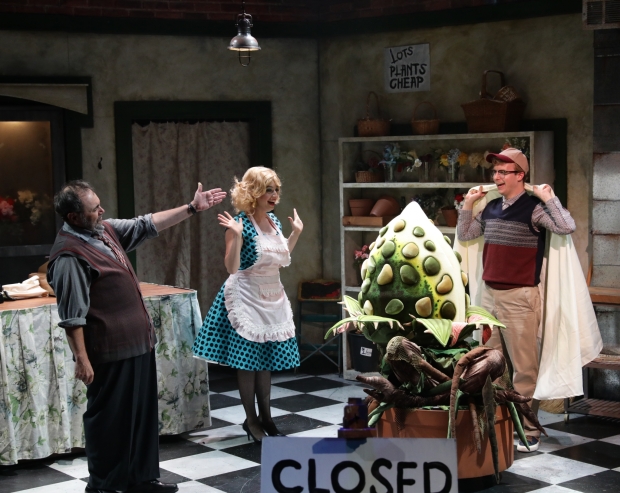 BOSTON — The late Howard Ashman and Alan Menken gained fame composing scores for hit Disney animated films that later became stage musicals, but they also had a hit with the 1982 musical “Little Shop of Horrors,” which ran for five years off-Broadway before later getting a Broadway run.

The musical was based on the 1960 cult black comedy film by B-movie master Roger Corman of the same name, which featured a young Jack Nicholson in his third movie appearance. Nicholson also appeared in the 1986 movie of the musical that also starred Rick Moranis and Ellen Greene.

The Lyric Stage Company of Boston is opening its 2019-20 season by staging a lively retelling of the musical, capturing the campiness and black humor of the Corman movie and adeptly adding the musical elements and choreography.

The cast features some emerging young talent and the reliable Remo Airaldi to tell the tale of a flesh-eating plant that literally – quite literally — changes the lives of people trying to eke out a living in a Skid Row flower shop.

A singing and dancing trio of 1960s street urchins — modeled after the female singing groups of the day — named Crystal (Lovely Hoffman), Ronette (Carla Martinez), and Chiffon (Pier Lamia Porter) set the scene and provide narration at key points of the story. In fact, the Crystals and the Ronettes were two of the prominent female singing trios of the day.

Seymour Krelborn (Dan Prior) is the very definition of a nebbish, toiling for years in the flower shop  after being taken in by Mr. Mushnick (Airaldi), despairing  of ever having a real life or meeting a girl. They are joined in the shop by Audrey (Katrina Z Pavao), an attractive young woman with both  low self-esteem and various injuries, being either extremely unlucky or suffering abuse at the hands of a smarmy motorcyclist/ dentist named Odin (Jeff Marcus, also excellent in other roles).

After an eclipse, Seymour comes upon a mysterious plant that appears to be a flytrap of some kind. Seymour names it Audrey II in tribute to the co-worker he admires. Audrey II doesn’t appear to be thriving – that is until it gets whiff of human blood after Seymour cuts himself.

It begins to vocalize its demand for more “food,” and by then Audrey II is attracting curious customers, Mushnick is ecstatic and the media is flocking to the flower shop to get a look

Prior’s Seymour skillfully takes nebbishness to the next level, Pavao’s Audrey captures the vulnerabilities of the character and her desire to go someplace away from the grime and grit of Skid Row (“Somewhere That’s Green.”).

Ashman, who died in 1991, wrote the book and he and Menken’s bouncy, buoyant score melds such ‘60s  genres as doo-wop, R&B, and pop  in crafting numbers such as the title tune, “Skid Row (Downtown),” and “Suddenly, Seymour,” and the blackest of black comedy finales, “Don’t Feed The Plants.” Marcus is hilarious playing to our worst fears in “Dentist!” The capable Dan Rodriguez leads a six-piece orchestra that is more than up to the task of the score.

Director/Choreographer Rachel Bertone made her bones at small and midsize companies in the area, where she quickly attracted attention as one of the most innovative, creative and talented directors around. She has kept intact the humor and campiness of Corman’s movie and while “Little Shop of Horrors” is not a dance musical, the movement – especially with the street urchins – is lovely.

Lyric’s resident set of designers learning curve when it comes to working in Lyric’s intimate setting or each other, for that matter.

Janie E. Howland, who would have earned a 2020 IRNE if there was such a thing for her set earlier this year for Lyric’s “The Little Foxes,” has carefully crafted Mushnick’s dingy flower shop  and erected balconys above the stage as useful staging areas for the street urchins.

Franklin Meissner Jr.’s lighting, Andrew Duncan-Will’s sound, Marian Bertone’s costumes and the puppet design by Cameron McEachern are all important in setting the tone and atmosphere. Rachel Bertone is looking for. The original Audrey II puppets were designed by Martin P. Robinson.

“Little Shop of Horrors” remains a first-rate, horrifically funny musical tragi-comedy, putting its best tendril forward in its current production at the Lyric.

← At the ART, six Queens combine for a royal flash
‘Bowl-Mor Lanes’: No strike, but no gutter ball →