As a spectacle, ‘The Lion King’ is still undefeated 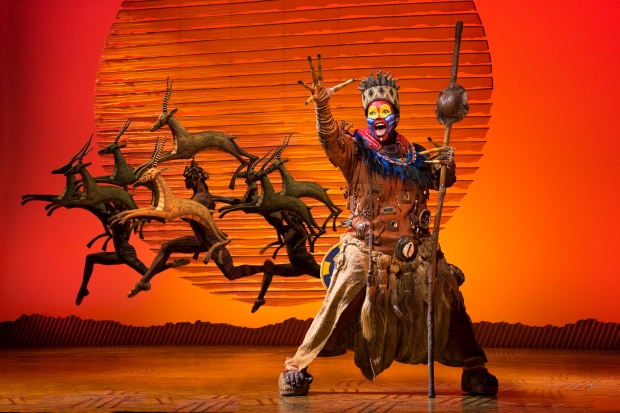 BOSTON – Yes, there are masks, puppets, costumes, headgear and all manner of theatrical, Tony-winning devices in the musical “The Lion King.”

But the magic comes from the actors who bring to life  the characters and animals of the beloved story that is “The Lion King,” with the national touring production now at the Citizens Bank Opera House in Boston through Oct. 27.

The story has had several incarnations since the Walt Disney Co.  produced the animated feature  that grossed  $312.9 million domestically and approximately $850 million worldwide—and that’s in 1994 money.

The recent “live-action” CG reboot – which many consider an animated film – passed the $1.3 billion mark worldwide to become the largest-grossing animated film in history, although Disney doesn’t consider it as such.

Still, many billions of dollars later, it is a true theatrical spectacle of the first order. Newton native Julie Taymor made all kinds of history when she became the first woman to win a Tony for direction of a musical, and copped another Tony for costume design while the show won six Tonys in all. Taymor continues to oversee productions of the show worldwide.

“The Circle of Life” number that opens the show remains one of the most exciting and jaw-dropping opening numbers in theater history.

And while the human characters are just fine, the animal characters come alive in dazzling fashion, as the human beings behind them tend to melt into the background thanks to Taymor’s puppets and costumes,  and you are left with the imperious hornbill bird named Zazu (Greg Jackson);  the comic meerkat Timon (Nick Cordileone); the  flatulent warthog Puumba (Ben Lipitz) ;and the three scheming, hilarious but hapless hyenas, Ed (Robbie Swift), Shenzi (Martina Sykes) and Banzai (Robbie Swift).

In addition, there are elephants, graceful gazelles, antelopes, and all manner of other African animals. courtesy of Taymor’s imagination.

The show also works as a primer on African culture in general, heavily influenced by the rhythms of that continent and musicians such as Lebo M, the South African who produced the gorgeous choral harmonies that form the backdrop of the piece.

The book by Roger Allers and Irene Mecchi adapted from the film’s screenplay tells the story of he kingdom of the Pride Lands around Pride Rock, ruled by The Lion King, Mufasa (Gerald Ramsey) with his wife Sarabi (Chante Carmel), who oversee their rambunctious cub Simba (Richard A. Phillips Jr.) and his friend Nala (Brilyn Johnston).

But uneasy lies the crown on Mafusa’s head, as Mafusa’s brother Scar (a sparklingly evil Spencer Plachy) is plotting to replace his brother on the throne, even if it means eliminating his nephew along the way.

Scar finds a way to put Simba in harm’s way, but Zazu, watching over Simba, puts out the alarm and Simba is saved from the clutches of the ravenous hyenas.

Scar eventually orchestrates Mafusa’s death, and Simba, fearful he would be blamed, flees the kingdom, eventually meeting up with two unlikely comic allies, the aforementioned Timon and Puumba. In Simba’s absence, the kingdom is being ravaged by Scar and the hyenas, and the grown Simba (Jared Dixon) will eventually have to make a decision about returning to Pride Rock and taking his rightful place on the throne.

The score includes original music from the film by Elton John and Tim Rice, as well as contributions from Lebo M and Hans Zimmer, Mark Mancina, Jay Rifkin, and Taymor herself.

This is the fourth time “The Lion King,” has visited Boston, and I can detect no dropoff in the touring company’s devotion to Taymor’s vision. It remains a a perfect marriage of story, music, costumes, lighting, set and sound, and when it comes to theatrical spectacles, it is still the undefeated heavyweight champion of the world. Gerald Ramsey as (Mufasa) in “The Lion King.” ©Disney. Photo by Matthew Murphy

← With ‘Passengers,’ The 7 Fingers take the next step
‘SpongeBob Musical’ on stage is inspired silliness →