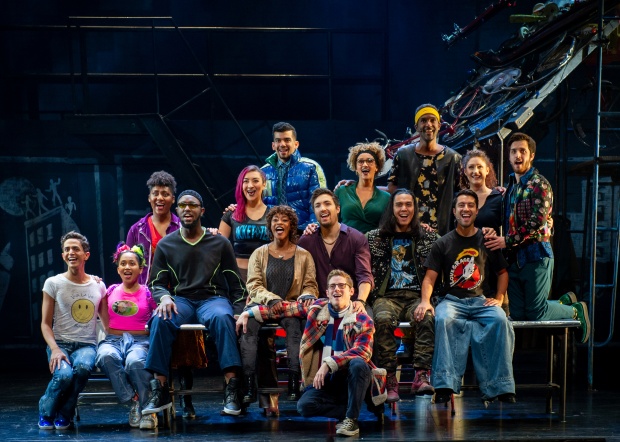 The Company of the RENT 20th Anniversary Tour now at the Boch Center Shubert Theatre through Nov. 10. Credit Amy Boyle 2019.

BOSTON –  We’ll never know what Jonathan Larson would have become. Larson died on January 25, 1996, the night before his masterwork “Rent” debuted off-Broadway at the New York Theatre Workshop on Jan. 26.

Based loosely on the opera “La Boheme,” it told the story of a year in the lives of poor young artists in New York City’s East Village, struggling to survive and create a life in the thriving days of the  Boheminan Alphabet City, set against the background of the HIV-AIDS crisis.

“Rent” went on to become a cultural phenomenon, winning four Tony Awards in 1996, the Pulitzer Prize, then running for more than 5,000 performances on Broadway at the Nederlander Theatre, before becoming a 2005 movie and even being presented live on TV in  2019.

No musical has ever spoke so eloquently to a generation as did “Rent,” and the scourge that was the AIDS epidemic, at a time when the disease had yet to be contained and was still a death sentence for many. Now it works more as a period piece, but a very effective period piece.

“Rent” spoke to young people in a way no musical has before or since, and it also showcased  characters that had hardly been staples of the American musical scene: Angel (Joshua Tavares), the drag queen with a heart of gold who finds a perfect partner in the brilliant Tom Collins (Shafiq Hicks), the computer whiz who finds life on the street as fulfilling as his alter ego as a university professor;  Joanne Jefferson (Samantha Mbolekwa), the lesbian lawyer with a political bent whose lover is the dynamic and sexy performance artist Maureen Johnson (Kelsee Sweigard). 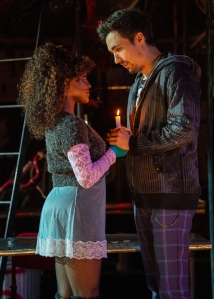 At the center of it all are aspiring photojournalist Mark Cohen (Coleman Cummings),  who was once with Maureen and is far removed his roots in suburban Scarsdale, and his best friend Roger Davis,  a singer/songwriter who has withdrawn from life after both he and his partner were diagnosed with AIDS, and she subsequently died. He is clean after battling drug addiction but still in the East Village building – apparently a former warehouse — where he and Mark are squatters with privileges.

Roger is still in mourning when an exotic dancer named Mimi Marquez (Aiyana Smash) walks into his life (“Light My Candle”) and does her best to lift him up. She has taken up with wealthy landlord Benjamin Coffin III (Juan Luis Espinal) but her real feelings are with Roger.

“Rent” is loosely based on Giacomo Puccini’s opera “La Boheme,” and pays tribute to that not only in its characters and structure but in the rousing production number “La Vie Boheme.”

Conductor/keyboardist Mark Binns rocks out with the rest of the  tight five-piece band that gives the Larson score its full due, including “One Song Glory,” “I’ll Cover You” “Another Day” and “Without You,” songs which would become anthems for a generation.

Twenty years after the first  touring company came to  Boston  – 10,512,000 minutes, to be exact — when the cast gets together after intermission to sing “Seasons of Love,” it  can still send a chill down your spine and leave a lump in your throat, whether you’re a “Rent Head” or you’re seeing the show for the first time.

“Rent” was responsible for bringing in many young theater-goers who had probably never seen live theater before, drawn both by the characters — who were more diverse than Broadway had ever seen before and looked like them – and Larson’s energetic pop-rock score.

As a piece of musical theater, it was never a perfect piece, but tweaking that would have taken place after the off-Broadway run and before Broadway never took place, and the musical  became frozen in time.

The question remains what would Larson have become if he had lived?  Probably, he would have become the conscience of a generation, a voice for those who have no real voice, and “Rent” would have been only the beginning.